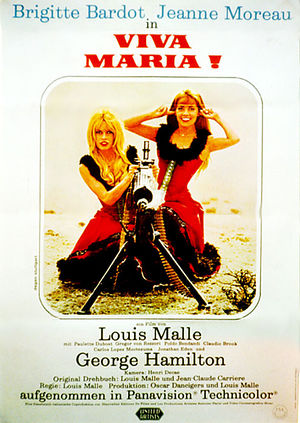 This movie is fairly unique as it is one of the few Spaghetti Westerns with two leading ladies (see also: The Legend of Frenchie King). Then add to that the fact that both ladies, Brigit Bardot and Jeanne Moreau, were famous before making this movie. This fame may account for the estimated production cost of $2.2m. The directors of this genre typically saw women as marginal characters, an opinion espoused by Sergio Leone, so it is good to see a movie that bucks the trend. Directed by Louis Malle (1965), who in 1957 directed his first film ‘Ascensur pour l’echafaud’ which made Jeanne Moreau a star. Music by Georges Delerue (see also: Cemetery without crosses). Stars George Hamilton (American) as Flores, a Revolutionary leader. The movie is largely shot in Mexico.

My best description of this movie type is a Comedy Half-Spaghetti Western. It is an action movie with comedy, and commentary on Politics, the Church and the Wealthy.

The movie starts by following the movements of an IRA bomber and his young assistant daughter as they go from Dublin (1891) to London (1894) to Gibraltar (1901) and then to Central America (1907), bombing British Empire targets while on the run. Marie (Marie Fitzgerald O’Malley) is the tom-boy daughter of the IRA bomber who is killed by colonial forces while planting a bomb, leaving Maria to evade escape by hiding with a Circus troupe led by ‘The Great Rodolfo’, who travel around in horse drawn caravans performing from town to town. Marie befriends the other Marie (dancer/actress) and takes the place of her stage partner who has just shot herself after a lover falling out. The double act become known as ‘Maria and Maria’.

The troupe help Maria to escape from the British Empire and we see her transform from an unsophisticated tom-boy into a beautiful lady and she also discovers men and makes up for lost time. While performing in lively dance halls and travelling through picturesque countryside, Maria accidently invents the strip-tease, which makes the troupe very popular. Along the way, Rodolfo works on investing a curved rifle that can shoot around corners. There is some on-screen rivalry between the Marias throughout, a rivalry that is rumoured to have continued off-screen. 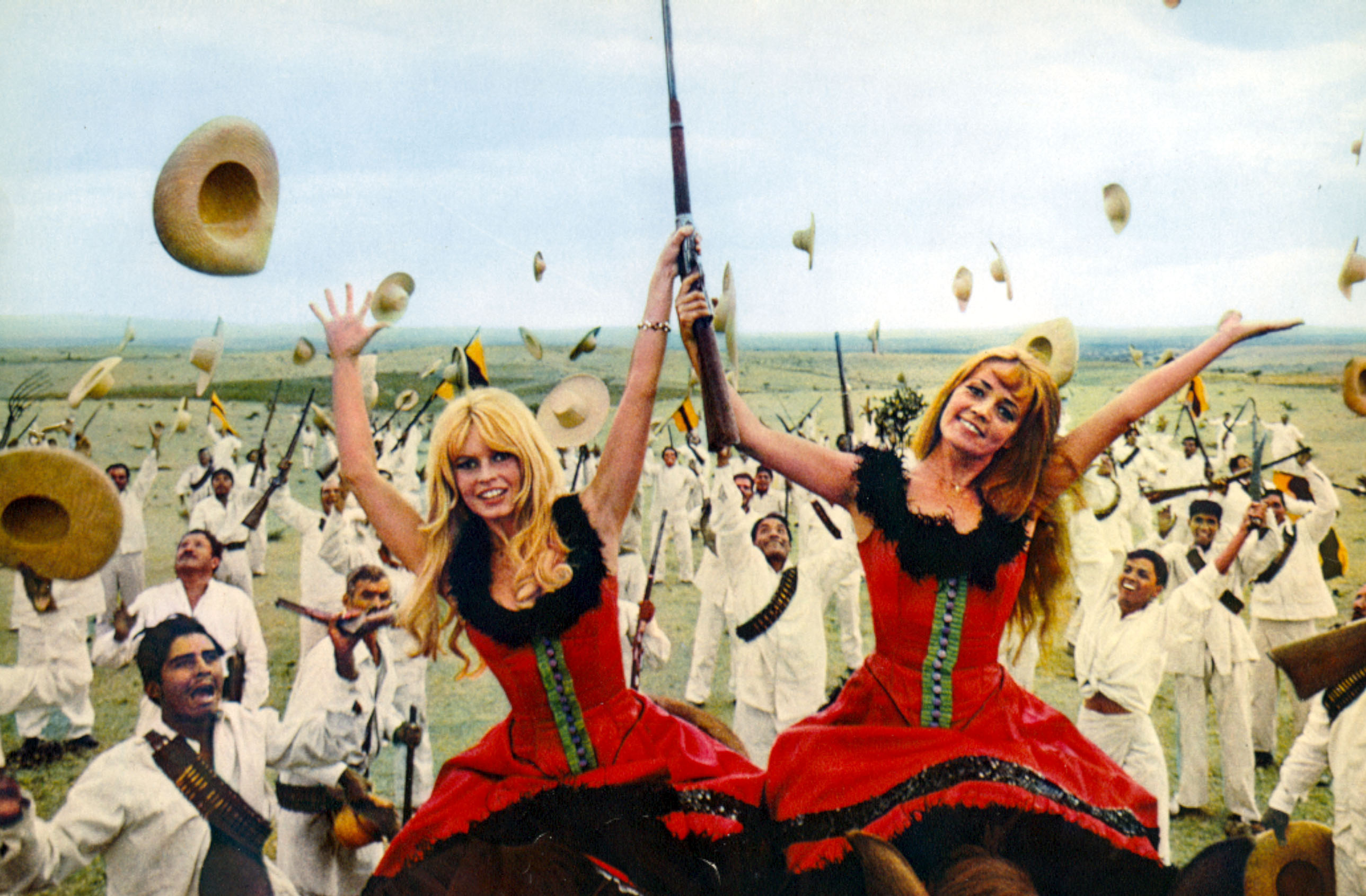 The troupe witness a village massacre and the capture of peasant villagers by the men of a local dictator Rodriguez. The revolutionary leader Flores is also captured and taken to Rodriguez ranch along with the troupe, where he is destined to hang. Rodriguez lives a lavish lifestyle in contrast to the peasants as seen by his motor car, art collection, electricity, gramophone and a Skyton-Babbit 1907 machine gun - a weapon that excites Maria. A comical scene follows where Rodriguez chases the two Marias around a room.

The other Maria falls in love with Flores, and helps him escape along with his followers but he is shot by Rodriguez while escaping. After returning to his village, Flores dies with his last words to the other Maria ‘Take up my cause when I’m dead’. Despite opposition from the Church and some villagers, the Revolution is On, led by the two Maria’s – rifles come out from a mattress, grenades from a hen’s nest and a handgun from a baby’s nappy. When the revolutionaries are later under attack from Rodriguez with a canon/machine gun, Maria’s knowledge of weapons saves the day by throwing a bomb at the canon and then turning it against Rodriguez and his men. In one unusual scene Maria swings through the trees, Tarzan style.

The peasants rise up and join the Marias in battle. The Dictator (of San Miguel) sends out the ‘Train of Death’ which is attacked by a bee’s nest left on the line and the train is commandeered by the rebels and renamed ‘El Libertador’ (The Liberator). The rebel train is greeted in many towns by supporters and the Marias are granted the ‘key to the city’. The Marias have become national icons for the peasant class. The Church (Father Superior) sees the adoration of the two Marias as sacrilege and take charge of the situation. The train of revolutionaries is seen heading for an attack on San Miguel when it is stopped by the Father Superior, a carriage secretly decoupled and the Marias are taken away to be tortured in the dungeons in a Spanish Inquisition style. The Marias refuse to sign a confession. The ancient torture equipment fails and the Father Superior apologies saying, ‘I’m so sorry’ to the Marias. 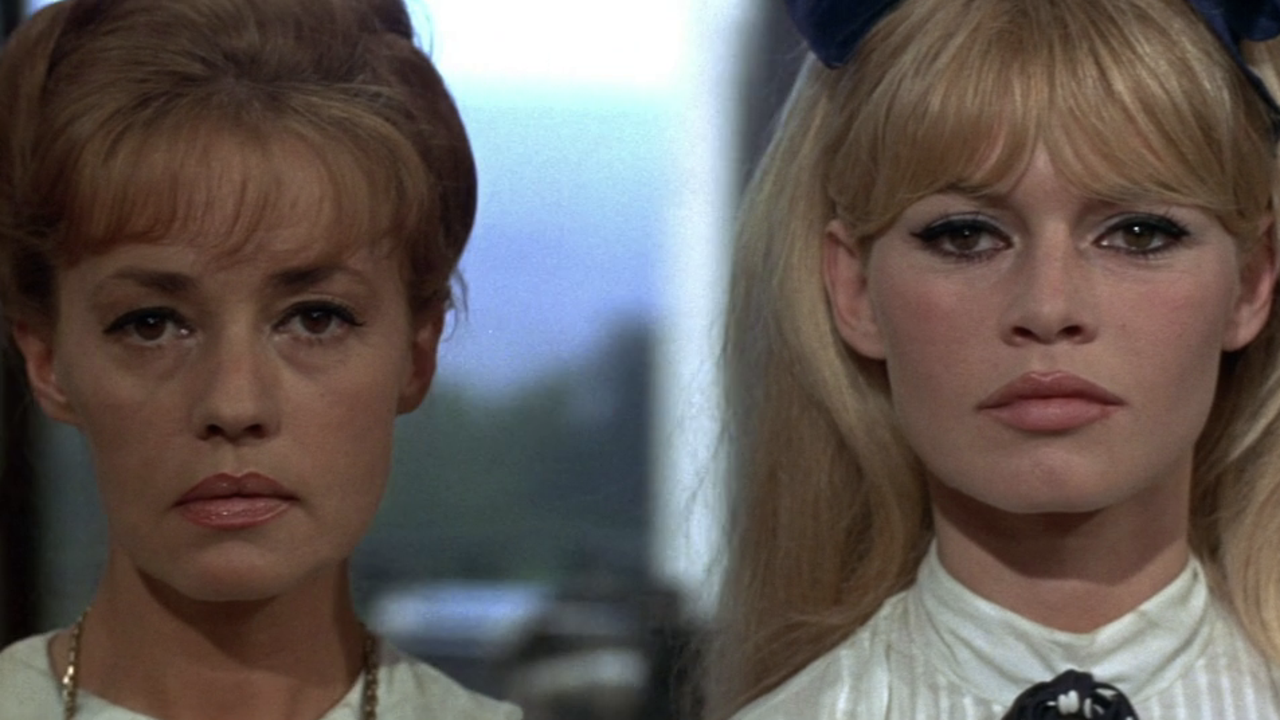 A group of rebels led by another leader, Pablo, attack the town as planned but the soldiers are ready with the machine gun ready and barricades in place - a lively street battle ensues. The troupe/rebels arrive later from the decoupled train to join in as the Dictator tries to shoot the Marias, against the Father Superiors wishes. The troupe theatrics add to the scene with pigeons dropping hand grenades, Rodolfo shooting his curved gun at a barricade (the gun has been perfected with advice from Maria), acrobats swinging into open windows etc. The Marias are rescued from the firing range as Rodriguez is shot by the curved gun. The general is killed by the troupe strong-man with a billiard cue that he was using earlier. The Father Superior, in a dramatic switch, now greets the two Marias with open arms before being accidentally killed by a hand-grenade lobbed by the dying Rodriguez. The headless Father Superior heads down steps carrying his head in his arms, saying ‘Ah women’. This image is reminiscent of a Cephalophore (Greek for "head-carrier") – a saint who is generally depicted carrying his own head. The Revolutionaries are victorious and march through the street in honour of the two Marias and their dead leader, Flores.

The troupe return to Europe to tell the story of the two Marias on stage.

Verdict: as a Comedy Half-Spaghetti Western the film worked well and is very watchable.