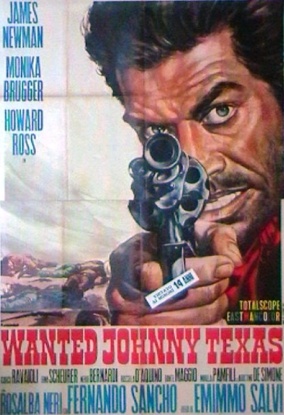 Johnny Texas is recruited by the U.S. Army to find a safe passage for a wagon train and impatient settlers to the West. Johnny figures his best bet is to pay off the local band of desperadoes helmed by a psychotic outlaw. When that doesn't work, Colonel Stewart orders Johnny to attack a fortress and detonate a secret stash of dynamite.

Emimmo Salvi (Seven Adventures of Ali Baba) directed this bloody, peculiar spaghetti western shot in Florence, Italy. The U.S. Cavalry hires Johnny Texas to shepherd a wagon train through hostile territory. The clever Johnny runs afoul of a band of outlaws, blows up a fort, and mixes it up with a spy (Monika Brugger) undercover as a dancehall girl. Salvio fills the film with bizarre touches, like dressing the Cavalry in blue and red (blue and gold was the proper combination) and having Brugger travel 400 miles to deliver blasting caps which are never used. This is a genuinely strange failure which might almost pass for pseudo-surrealism if it wasn't so obviously based on poor planning and bad research. Actor Willy Colombini, appearing here under the alias James Newman, formerly appeared in peplums like this one.