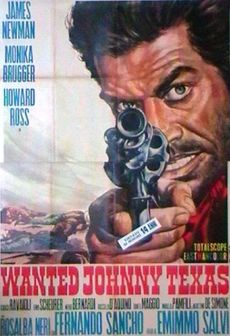 A forum member, the infamous Bad Lieutenant, described the experience of watching this movie as Holy crap-o-rama!. Directed by Emimmo Salvi, according to his contemporaries a director who always wanted to do things differently from the others, Wanted Johnny Texas is a spaghetti western like no other spaghetti western (1). It has a lot of gratuitous violence, some of the ugliest sound stages in the history of film making and Fernando Sancho with blond hair. The film's major asset is Monica Brugger.

Johnny Texas is a man wanted for murder, but he's saved from the gallows by a Colonel of the Texas Rangers (Goldilocks Fernando) because he's the only one capable of rolling up the gang of madman O'Connor, who's blocking a narrow gorge, a vital passage for transport and to settlers heading westwards. He's asked to kill the psycho and to blow up a fort full of dynamite; the blasting caps will be delivered to him by a spy travelling incognito as a dancehall princess.

With the robbers' den located in a cardboard grotto, Wanted Johnny Texas occasionally feels like a western set against a sword & sandal background. The ridiculous sound stages (including matte paintings) and some story elements, such as the villain's henchmen all wearing the same costume, also gave me the idea I was watching a parody on the James Bond or Matt Helm movies. I wouldn't have been surprised if a space ship had landed, but director Salvi settled for a Flamenco dance around the campfire. The script is a complete mess, with lot of loopholes and loose ends. Brugger risks her life and travels miles and miles to deliver blasting caps that are never used, and the madman kills everybody who disagrees with him, including his own men, and yet his private army never seems to diminish in numbers. Virtually every action scene is sped-up, creating a sort of comedy capers effect. 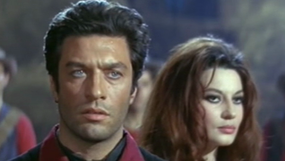 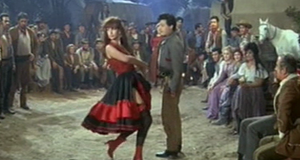 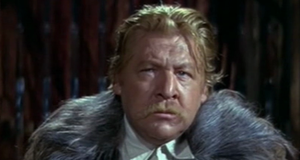 Apart from Fernando and Rosalba, the actors do not belong to the circle of familiar spaghetti western faces. That is not a bad thing per se, but I wasn't impressed by either Howard Ross (in real life Renato Rossini), who deliberately hams it up as the madman (and seems to enjoy himself doing so) or James Newman, who makes his only spaghetti western appearance as the Johnny from the title (2). The best thing about the entire movie, is Brugger, who walks around in ultra-tight pants and flashes her well-shaped thighs during that dance around the campfire. She also has a catfight with one of the settlers girls ("I told you to stay away from our men!"). She is punished for her bad behavior by Newman, who repeatedly kicks her behind in the film's final moments. Bad girl, bad bad girl.

To my surprise the movie seems to have some fans. The Italian spaghetti database calls it 'innovative' and also speaks highly of Emimmo Salvi's 'inspired direction'. Some of the people involved in it also think Salvi did the best with the ultra-tight budget provided by the inexperienced producers from Firenze. Admittedly the movie has some surreal qualities (but maybe they're unintentional and due to incompetence), the hero has a buffoonish sidekick, and the finale offers a nice twist in Sartana/Sabata style; actually I'm quite sure Parolini had it in mind while preparing the ending of the first Sabata movie.

So in the end, what is this? An overlooked gem, an interesting failure or just a crap-o-rama? Judge for yourself. 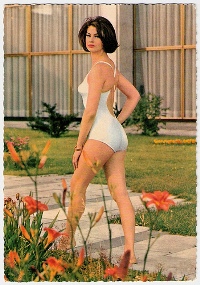 According to the sparse information available, she is German, but I have not been able to find out when and where she was born. In 1964 she was the German contestant at the fourth Miss International Pageant in Long Beach, USA. She only reached the semi-finals but attracted the attention of the famous glamour photographer Bruno Bernard, also known as 'Bernard from Hollywood'. She never made it to Hollywood though, but had a (very) brief acting career in Italy, where she starred in two spaghetti westerns, Wanted Johnny Texas and Buckaroo, the Winchester does not forgive, both from 1967. In the same year a picture of her (in bikini) was also on the cover of Belgian magazine Ciné Revue.

In 1972 she appeared on television in six episodes of the series Suchen Sie Dr. Suk? (Are You Looking for Doctor Suk?). It's the last credited TV or film appearance and Monika seems to have vanished from the face of the earth ever since.