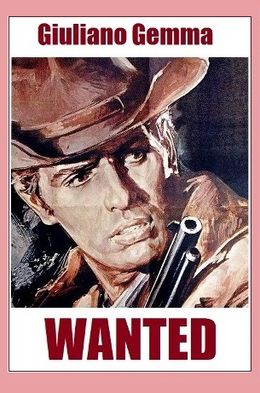 Gemma is an honorable man, the sheriff of a town where crime is rampant. When he is accused of a murder, he must try to prove his innocence by exposing those who framed him for the crime
__________

Wanted - one of the very few spaghetti westerns with an original English title - is the third movie Giuliani Gemma made with director Giorgio Ferroni, following One Silver Dollar and Fort Yuma Gold. Unlike the two previous films, it is not set in the aftermath of the Civil War. With a plot about cattle rustling it's is a more traditional, occasionally even a little old-fashioned western.

Giuliano Gemma is the new sheriff of a town dominated by a corrupt land owner called Vargas, who robs smaller ranchers of their cattle by forging their brands. On his way to town Gemma is shot, but we know he is Bello Giuliano, so he can't be dead. And yes, in the next scene he taps the dust off his precious suit, mounts his horse and rides into town. However, a few minutes before his arrival, one of Vargas' assistants has been appointed as sheriff, but since Gemma is in possession of the right papers, he is given the job. He does his job so well that even the people who'd like to get rid of him are forced to call him a hero, but then he is framed for murder ...

With its Mexican bandits, Mexican Indians, and a particularly resourceful priest (if his prayers won't help he'll lend you his gun), Wanted is a colourful, but also a rather episodic film. With the emphasis more on fistfights than on shoot-outs, it's a relatively light-hearted film, but there are a couple of pretty violent scenes (*2). A heavily wounded man is beaten to death and in one particularly alarming scene a very young girl is threatened to be killed when her grandfather's house is under attack. The first half hour is rather tame and there's an almost laughable scene with Mexican bandits pursuing a wagon in pure Indian style, but the film picks up after Gemma has been accused of murder and is freed from jail. The plot about cattle rustling is a bit naive, but I loved the branding irons used to forge the brands of stolen cattle. The romantic subplot is handled with elegance and a touch of wry humour: after his ultimate fistfight with Marquand, Gemma ends up in a pigsty, both his clothing and his face covered with pig's shit. When Gimpera gives him his well-deserved kiss, her face is covered with shit as well. But of course she doesn't care.

Like some have noticed this is spaghetti western from the glory years (it was released in '67) with the look and feel of an early outing. Sergio Corbucci's Django had changed the aspect of the genre, but Gary Ryan is still closer to Ringo than to Django, and the movie more about redemption than revenge. Antonio Secchi's cinematography is very fine, but scenes shot in the Almeria desert are somewhat erratically alternated by shots of the green (and soaking wet) landscape around Rome. In one of the scenes we even spot snow in the main street of the Cinecittà  western town. Due to its episodic structure the film works better in parts than as a whole. Performances are fine throughout. Kudos go to Nello Pazzafini for a wonderfully tongue-in-cheek performance as the resourceful priest. Gia Sandri is tantalizingly sexy as Cheryl, the woman who got him in trouble in the first place, but whose testimony finally clears him of any suspicion. Gianni Ferrio's score is very fine and atmospheric, and the song When you are wanted (wanted, Wanted WANTED) will worm its way to your ears and stay there for days ...

Simon Gelten is a long time contributor to the SWDb. "I'm not as old as Tom B. but I'm working on it. I hope to catch up with him by the end of the next decade.", he says. Simon saw all movies by Sergio Leone and several by Sergio Corbucci in cinema, most of the time in Eindhoven, the city where he was born. Currently, Simon is living in Turnhout, Belgium. Simon is active within the database as both Scherpschutter and his alter ego Tiratore Scelto.
Retrieved from "https://www.spaghetti-western.net/index.php?title=Wanted_Review&oldid=111685"