Title: Western All'Italiana - Volume 2 (The Wild, The Sadist and the Outsiders) 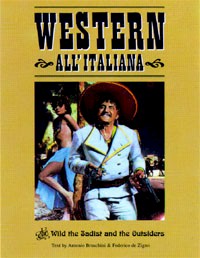 Brief Review: The format of the second book deviates significantly from the first: instead of the continuous-text chapters devoted to the each director, the book is now substantially a list of films in chronological order, giving cast and crew details followed by a short plot summary and review. The length of the reviews varies from a couple of paragraphs to a whole page (for the more important films). The theme of the book is very much in the title "The Wild, The Sadist and the Outsiders", and therefore the reviews are usually keen to point out the various depravities which take place in the films such as gory killings, rapes, tortures, and so forth. This focus may not be to everyone's taste, but a good selection of films are covered, and not all just for the violence.

Like the others in the series, the book has a good selection of pictures, mostly from posters. Unlike the first book the pictures are not usually captioned, which occassionally makes it hard to identify those pictures that come from stills of the film. Towards the middle of the book the pictures get significantly ahead of the text, which makes it slightly inconvenient to flick between the film being discussed and the associated pictures. There are a few mistakes in the English text, but it is generally readable. For the films I've seen, the plot descriptions are accurate. As with the other books in the series, the authors are probably less critical than they should be about some of the lesser films in the genre.

Retrieved from "https://www.spaghetti-western.net/index.php?title=Western_All%27Italiana_Volume_2&oldid=141141"
Category:
Cookies help us deliver our services. By using our services, you agree to our use of cookies.