What Am I Doing in the Middle of the Revolution Review 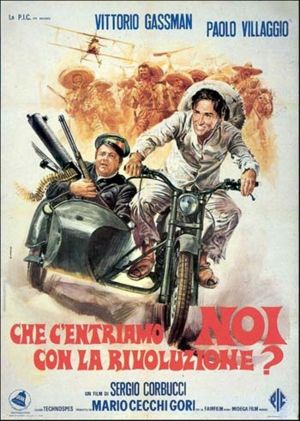 An Italian theatre actor and an Italian Priest are living in Mexico c. 1911. When they are caught right in the middle of a large battle, they accidentally incur the wrath of both the Federales and Revolutionaries. They must band together and impersonate different Revolutionary and Federale figures to stay alive in this ruthless country.

With the so called "Zapata Westerns", Sergio Corbucci found a great talent. These types of westerns certainly had a lot in common with his style of filmmaking: Action, Comedy, Violence, and Politics. And with The Mercenary and Companeros, Corbucci reaffirms this statement. But in the early 70's (after Companeros) Corbucci's style began to wane and his work thereafter seemed far removed from his 60's classics. This was the second to last Western Corbucci would ever make. And compared to his earlier films, it is a large step down. But when put up with several of the poorly paced comedy Westerns flooding the Italian cinemas, this is head and shoulders above them.

One skill Corbucci showed in making his earlier Zapata's was the relationships between two characters. He handled these with comedy, feud and skill. This film also focuses on two men in the Mexican Revolution. Two Italians though. Perhaps a salute to the film's country of origin. Not unlike the previous partnerships, the characters here are far less enjoyable. Vittorio Gassman takes the lead as the Actor Guido Guidi. The character is rather unlikeable as he is always complaining and acts like a prima donna. Paolo Villagio seems very naive and it is hard to relate to his character either. But their relationship is far more focused than in the other Zapata's.

Corbucci always spiced up his Revolution's with lots of Comedy. It was always well placed and kept things less than serious while allowing Corbucci's political statements to seem far less preachy. But they were never out and out Comedies. This film is. But the comedy here is too fast and is nearly impossible to get all the jokes. And in this case, it fails to cover up Corbucci's large political statements. And somehow, the film's execution makes the comedy seem strangely out of place.

Though it may seem I don't like this film. Not true. Because the film has this one great aspect. It is a fairly well made Zapata that has a great picturesque quality that seems to cover all aspects of the Mexican Revolution All'Italiana. This specific feeling can be described as large scale as this film definitely seems large. We have grand sieges, biplane action scenes and machete wielding villagers. These aspects make the film very episodic while retaining a strong focus on both the two heroes and the Revolution. But it is uncharacteristically short on action for a Corbucci film. It seems he stopped adding so much action in his Westerns after Companeros.

A major problem with this film is the casting. Vittorio Gassman and Paolo Villagio both give very good performances but they seem so out of place in a Western. Their characters are both rather unlikeable but are interesting together. Gassman is a loudmouthed Shakespearian actor and Villagio a pious priest. Among the supporting cast is Leo Anchoriz who is very good in his role as a Revolutionary leader. Over the top as usual. Riccardo Garrone stars as Garibaldi, an Italian ex-patriot in Mexico. His character is interesting but not fleshed out. And finally, Eduardo Fajardo steals the show as the oily Federale.

Sergio Corbucci by this time had lost his knack and his Westerns were increasingly flawed. But his direction is swift but too unfocused. His political comments are very thrown in. One scene is pure comedy, the next is pure politics. It does mesh well from scene to scene. But on the plus side, Corbucci has never lost his competence in staging elaborate, well filmed action sequences, that he does know exactly where to place in the film, giving us a somewhat steady pacing.

Ennio Morricone gives us another one of his normal 70's western scores. Slower in pace but very fitting. He may overuse the whistling though. On a whole, his score is also somewhat melancholy. Not really sad but a little downbeat in the tune. This score also shares many similarities with Sonny and Jed's score. Being slower.

A heavily flawed but quite well made Corbucci Western. Made by this director while his talents were slowly decreasing. He still holds on to many of his talents from the 60's but fans of Corbucci may be disappointed. And if you don't like it, you may ask yourself, "What am I Doing in the Middle of the Revolution?!"