What am I doing in the Middle of the Revolution? Review (Scherpschutter)

What am I doing in the Middle of the Revolution?

Corbucci’s penultimate western, and also the third (and arguably least convincing) part of his Zapata trilogy, following The Mercenary and Compañeros!. Again it’s a third person narrative, ‘told’ by one of the protagonists, and again there’s a pair of opposing characters, but instead of the cynical European mercenary joining a naïve Mexican peon, both characters - an actor and a priest - are outsiders. In 1973 Corbucci no longer believed in the spaghetti western, but didn’t want to accommodate to the rattle-brained type of comedy westerns that were overflowing the market. What am I doing in the Middle of the Revolution? was supposed to be a symbiosis of a Zapata western and a thoughtful comedy in the style of Mario Monicelli’s La Grande Guerra (1959), about two young Italians serving the army, but trying to stay out of the war (1). Note that Monicelli’s movie was also one of the sources of inspiration for Leone while making The Good, the Bad and the Ugly, and that it also starred Vittorio Gassman, the actor playing Guido Guidi in this movie. 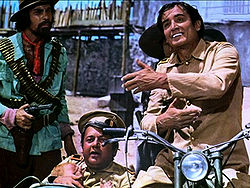 Guido Guidi is an Italian actor of sorts (who thinks he’s a genius) who is invited by an impresario to bring Shakespeare to the stage in a large theatre in Mexico. The impresario is a descendant of Italian revolutionary Garibaldi, who sympathizes with the revolutionary forces of Carrasco, and the performance is only a trick to lure the higher classes to the theatre, in order to give Carrasco the opportunity to kill as many of them as possible in one strike. Wearing the purple dress of a cardinal, Guido is asked to bless the activities of the revolution, but when the revolutionaries are under attack of the federal army, he escapes with the help of a priest, who thinks he’s a real cardinal. The two accidently gun down a federal firing squad, and are therefore now persecuted by general Herrera, a ruthless army chief, but also a fan of the Italian opera …

In the previous films, the cynical and greedy European mercenary slowly developed a revolutionary conscience while instructing the Mexican peon in the art of warfare. The films were also clever variations on the often used master-pupil concept: while instructing the peon, the mercenary was, in a sense, also instructed by him: their friendship and mutual experience made him aware of the social reality of the country, and his commitment to the revolution and its cause. In this movie there’s very little interaction between the two protagonists, and the character development is radically different. The actor finally dedicates himself to the revolution, not out of sympathy for its cause, but because he identifies himself with a part he’s asked to play: that of the deceased Emilio Zapata. Dying like the character he plays, is the ideal way of dying for a brilliant actor like him, Guido Guidi.

The theme used here by Corbucci, is called the Doppelgänger motif. Good examples of stories with such a motive are (in literature) Fyodor Dostojevski’s The Double: A Petersburgh Poem, about a man who feels his identity is usurped by a double, and (in cinema) Akira Kurosawa’s Kagemusha, about a lower-class criminal who is taught to impersonate a dying warlord, and slowly loses his own identity in the process. In this case the ‘process’ is rather abrupt, and therefore not very convincing. However, there are a couple of clever observations about history and revolution, and the thin line between reality and illusion. At one point the actor tries to convince the priest that for him it’s all a show, that for an actor life and death are mere illusions. Several scenes are illustrations of mistaken identities: the final scene, with the actor identifying himself with the part he’s playing, echoes an early scene in which he is mistaken by the audience for a real African American when he’s made up to look like Othello, the Moor from Venice. In a very bizarre scene the two are confronted with bandits who sell severed hands of peaceful Indian peasants as a sort of scalps to the federales. When Guido is about to be executed by them, he’s saved by one-handed, machete wielding peasants with a sort of skeleton masks (2). To add to the confusion, the Indians tell him that Mexico was taken away from them, and that they are the oppressed people, forgotten by the entire world.

What am I doing in the Middle of the Revolution? is an intelligent movie, and some scenes are vintage Corbucci, such as the opening scene, with the federales listening to Vincenzo Bellini’s opera I Puritani, played on a gramophone, while dozens of revolutionaries are executed , but there too many slow stretches and downright silly jokes like Don Albino being bumped into the seat of a car by a bull, or – even worse – being lassoed into the air from a bi-plane by Guido Guidi.