White Fang and the Hunter Review 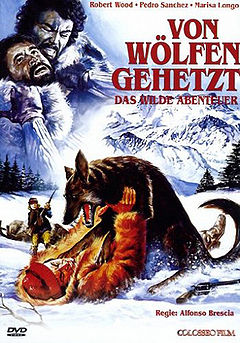 Presumably shot back to back with Brescia's other Alaskan epic La Spacconata (White Fang and the Gold Diggers) as it shares the same cast, same sets, same costumes and more likely than not the same dog food. The only thing obviously changed is the love interest and the annoying kid both of whom are replaced by actors equally squeezable and annoying depending on requirements.

If you didn't like Gold Diggers you're unlikely to find much delight here but, personally, I find them both reasonably diverting if not actually warranting much praise. But then I'm a sucker for a snowy backdrop to the point that not even a dodgy Kevin Keegan perm on the lead actor can put me off. It's not a great film. It's not even a remotely good one on any discernible level but somehow I found enough to keep me entertained. Or at least not irritated too badly.

The story is unrelated to Jack London’s original White Fang stories. Instead of a tale about gold diggers, we get a more spaghetti western like premise about a widow, a land grabber and a railroad. Now where did we hear about these things before? Bobby Woods is the hunter from the title, but this title, at least in Italian, is a bit misleading. Woods is not a solitary hunter but has a sidekick, played by Pedro Sanchez, who has one eye on a voluptuous squaw, and the other on the whiskey bottle. Zanna Bianca is a bit misleading too: he’s clearly played by a German shepherd who will have to eat an elk or two if he ever wants to become a real wolf. According to Woods circumstances on the set were as amateurish as they look on celluloid. He almost died during the avalanche scene. He was buried under a ton of snow and then they had the dog find him before they finally dug him out. Woods, who used to do a lot of his own stunts, calls it one of the most dangerous stunts of his entire career.

Apparently the actors have different memories as to where the movies were shot. Woods thinks they were filmed in the Alpes, Hundar, on the other hand, says they were shot near Norcia (Umbria), in the National Parc Monti Sibilini. Longo (the widow), who appears only in the second movie, says her scenes were filmed near Cuneo, in the province Piemonte, near the French border (which seems to support Woods’ idea that the movies were shot in the Alpes) (1). The scenes with the dogs playing wolves aren’t very convincing, but there’s a protracted shootout somewhere halfway the movie that isn’t bad at all. And it’s good to see Hundar – an actor I tend to identify primarily with pre-Leone westerns – as the bad business man who’s after the widow’s land as well as her body.