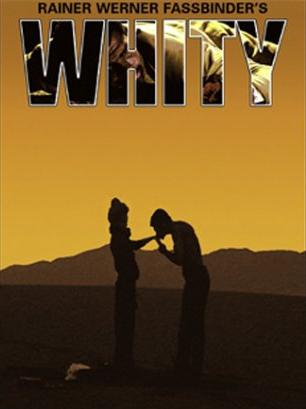 It’s 1878. Whity serves as a butler in the Nicholson Mansion somewhere in the west. He’s the illegitimate son of Master Ben Nicholson and the black housekeeper. The other inhabitants of the mansion are Katherine, Ben’s second wife, and the sons Davy, a lunatic, and Frank, a homosexual psycho. Whity is a devoted employee and bears all the insults and injuries obediently. He has also a kind of girlfriend in the town, a singer and prostitute, who wants Whity to get away from this decadent family. Each member of this clan - except for the mentally limited Davy – cabals against the others and wants Whity to be the loyal assistant.

Whity was probably Rainer Werner Fassbinder's least successful film, as it premiered at the Berlin Film Festival without getting much recognition, and then wasn't distributed theatrically in Germany, nor even received, for this kind of art-house film, the usual TV showing. But the tensions on the set, within Fassbinder's stock company, inspired him to make one of his best films, Beware of a Holy Whore, which was shot only a few months later. Beautifully shot by Michael Ballhaus in the idiosyncratic style of his later films, Fassbinder used for Whity the Almeria locations with the El Paso town set for a stilted and artificial melodrama, which stands much closer to the director's beloved Douglas Sirk than to John Ford or Sergio Leone. by Stanton