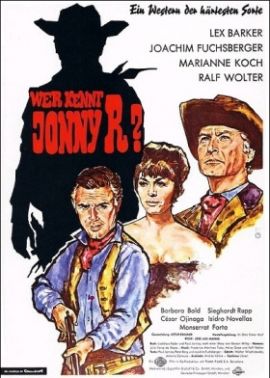 An early Spanish-German collaboration that often feels like a detective story with some western action thrown in. A good cast and nice cinematography of the Spanish landscape are assets, an uneven script a liability

Johnny Ringo is the mysterious leader of a gang terrorizing the region. His fiancée Bea is the only one who has ever seen his face. One day the sheriff of a small western town thinks he has him cornered, but Johnny and his men take refuge in the ranch of an ex-army colonel, Jason Conroy. The ranch is set ablaze and all people inside, including the Colonel's wife and children, die in the fire. Johnny Ringo is supposed to have perished in the fire too, but Colonel Conroy thinks he has escaped. One day Conroy receives a letter from the troubadour Monroe, who tells him the villain is working as a marksman named Clyde Smith for a travelling arms dealer.

This is a Spanish-German co-production, shot between November '65 and January '66. It was released in Germany in May '66, but in most countries it was shelved for a couple of years and only released when the spaghetti western craze was at its zenith. In spite of the presence of Lex Barker and Ralf Wolter (Old Shatterhand and Sam Hawkins of the Winnetou movies) we're far removed from the romanticized world of Karl May, but the film doesn't feel like a spaghetti western either. It often doesn't feel like a western at all, playing more like a detective story, with hidden identities, insinuations and revelations. Apart from the rather gruesome opening and the final shootout, there's not much western action. At first Rupp seems to be the protagonist as Colonel Conroy, the man who cries revenge, but after half an hour or so, the story takes a radical turn and the attention is drawn to Fuchsberger and Barker. It takes yet another turn at the one hour mark, when the identity of Johnny Ringo is revealed (it won't be a surprise to anyone) and the story is led to its climax, with a protracted scene set in a theatre and a violent conclusion with the villain getting just desserts.

Wer kennt Johnny Ringo? is uneven and far from great, but still has its moments. It was nicely shot on various locations in the North-East of Spain, among them the famous mountain range near Montserrat. The scene in the theatre made me think of the finale, set in the Albert Hall, of Hitcock's The man who knew too much (with Doris day singing Que Sera). There are also a few nice hints at the so-called doppelgänger motif when Clyde Smith, who's accused of being Johnny Ringo, starts identifying himself with the bandit and enjoying the privileges granted to him. The film has a fine cast, with Marianne Koch (the eternal beauty of the Sauerkraut western) and Sieghardt Rupp both fresh from A Fistful of Dollars, but I think the movie would've worked better if Fuchsberger and Barker had swapped roles. Fuchberger isn't a bad actor, but he doesn't fit the western genre very well and wasn't in the best physical form while making this movie. As a result, some of the action scenes look very poor. At the same time, Barker's role as the shady salesman is too passive. 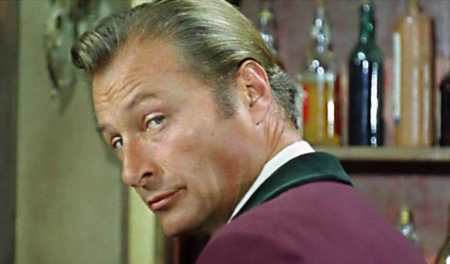 The most common English title of this movie, Who Killed Johnny Ringo? doesn't make much sense. The whole idea of the movie, is that Johnny Ringo was not killed in the fire. The German title means Who knows Jo(h)nny R(ingo)? That is: Who knows who he is? Has anybody seen his face? The Spanish title The Ballad of Johnny Ringo refers to the song, sung in the movie (in Spanish) by the troubadour played by (German) actor Ralf Wolter. I suppose it was sung in German in the German dub, but the version I saw only had Spanish audio. I did retrace a song sung (in German!) by Lex Barker on You Tube. According to the person who uploaded it, the song is related to the movie. I have no idea.

Retrieved from "https://www.spaghetti-western.net/index.php?title=Who_Killed_Johnny_Ringo_Review&oldid=115533"
Categories:
Cookies help us deliver our services. By using our services, you agree to our use of cookies.