You never can trust the Germans, British author Brian Glanville said after the game in Munich, of Sunday July 7, 1974. Germany had just beaten Holland in the final of the World Cup, and the German victory had reminded Glanville of another German victory in a World Cup final, the 3-2 win over Hungary, twenty years earlier, in Bern.

For the Miracle from Bern see: Cinemas of your Hometown - Universum, Kaiserslautern

Even though the game was played on German soil, Holland was favorite to become the new world champion. While Germany had been struggling, Oranje had played a good tournament, introducing their total football to the world. Furthermore Ajax (the heart and soul of the Dutch team), had beaten Bayern (the heart and soul of the German team) several times in the previous years, 5-0 (!) in a friendly, played in Munich, and 4-0, 1-2 in the European Cup in 1973. But how good was Holland? Were they really as good as people thought they were?

In fact neither of the two teams reached their very best form during the tournament. Holland had been confronted with injuries and personal conflicts. The best Dutch goal keeper, Jan van Beveren, and the most prolific goal scorer, Willy van der Kuylen, weren’t good friends of Johan Cruyff and the Ajax clan, and had therefore been left out of the team for some time and were not selected for the World Cup. Furthermore Oranje had serious problems in defense: Ajax stopper Barry Hulshoff was out with a knee injury (he would never really recover from it), and Feyenoord stopper Rinus Israel had undergone several knee surgeries in the past two years and there were serious doubts about his fitness. And then there was the problem with the coach.

The man who had brought Oranje to the World Cup, Frantisek Fadronc, an Austrian-Hungarian ex-patriate, was an amiable person but according to most people within the KNVB, the Dutch Soccer Association, he was too ‘soft’ to lead Oranje during the finals. Holland had played well in the qualifications, but their had been several incidents around the games. The KNVB wanted former Ajax-coach Rinus Michels, who now worked in Barcelona. Michels knew most players and he was respected (even feared) by them. There was one problem: Michels was not available, for a reason that may sound rather peculiar these days: Spain had not qualified for the World Cup, and had scheduled games for the Copa del Rey, the Spanish national cup completion, during the World Cup (in those days foreigners were not allowed to play in the Copa del Rey, so Cruyff and Neeskens could play for Holland). A bizarre solution was found: Michels would coach both Barcelona and Oranje, flying hence and forth from Spain to Germany. In his absence Oranje would be supervised by the soft Frantisek Fahdronc …

Michels had little time to fashion his Oranje team, but he took some drastic decisions. Instead of Twente keeper Piet Schrijvers, who was most likely to replace Van Beveren, he put the relatively unknown Jan Jongbloed in goal (Jonglboed was 33 but had never played for Oranje!) and he decided to post Ajax midfielder Ari Haan in the centre of defense, alongside young Feyenoord stopper Rijsbergen. It was no less than a miracle that the team did so well in Germany. All of a sudden, it all seemed to click. There was a personal drama though: Michels had wanted to play with left winger Piet Keizer, the second golden boy of the fabulous Ajax team that had dominated European club football for years, but Keizer was over his peak and had physical and psychological problems: he hated training camps and hardly ever spoke to his colleagues, nor to his trainer or the press (1). Keizer was very unlucky in Germany. Michels lined him up only once, in the game against Sweden (0-0), the only game Holland had not won …

(In the meantime in the German camp)

Germany had their own problems. They had won Euro ’72 with brilliant football, and were hot favourites to win the title in their own country. But a few friendly games in preparation of the tournaments were lost, and some players struggled to find their best form. They survived the group stages, but had lost their third game, against the Germans from the other side, GDR, East-Germany, which meant they could still be world champions, but not champions of Germany. And the Germans had their personal drama too, involving the best German midfield player from the decade, Günther Netzer. He had been fabulous during the Euro ’72 but had been struggling afterwards, especially after his change to Real Madrid. There were also doubts whether he and that other midfield ace Wolfgang Overath could play in one team. Overath lacked the absolute brilliance of Netzer, but he was a better team player and an easier person to work with for a coach. Team manager Schön finally chose to line up Overath and leave Netzer out of his team. Netzer would play only 21 miutes during the entire tournament, during the … all German match. 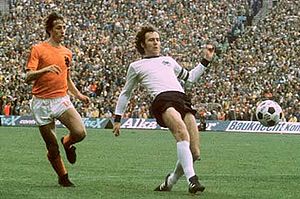 The Ballet Master and the Kaiser

There were no knock-out stages during the ’74 World Cup, the eight teams that had survived the first round (eight others had been eliminated, among them Italy, one of the favourites), played a second round in two groups of four teams. Holland played Argentina, GDR and Brasil. Argentina and GDR caused no trouble at all (4-0 and 2-0), even though the group led by Johan Cruyff, the Ballet Master, had played rather lethargically against GDR. During the game against Brasil, some of the weaknesses of the Dutch team became obvious. Ari Haan was definitely no central defender and Jan Jongbloed worked very nervously. After a good Dutch start, Brasil dominated the first half, but they failed to score, giving Oranje the chance to turn the tide in the second half. Some experts had noticed that Oranje looked like a weary team; there also seemed to be some problems with communication, the so-called total football, in which the position of a player who left his position was immediately taken by another one, in order to keep the team strategy intact, had failed on several occasions during the game: Cruyff, Van Haneghem and Rensenbrink had not taken over positions of team mates repeatedly. What those experts didn’t know, was that there was a lot discord among the players, and that there was no discipline at all in the absence of Michels.

(In the meantime in the German camp)

Because – some say: thanks to – the defeat against their brothers from the other side, Germany did not play in one group with Holland (now the great favourite) and Brazil (the defending champions). Instead they met Yugoslavia, Sweden and Poland. All three were beaten, Poland in a sort of naval battle, after a thunderstorm had turned the Wald Stadium of Frankfurt into the Lake stadium. While Holland seemed to have lost some of their brilliance and freshness in the course of the second round, Germany, led by their captain Franz Beckenbauer, generally known as Der Kaiser, had shown a growing form, especially in the game against Sweden. The Swedes, who had already lost against Poland, played all or nothing, and nearly caught the Germans by surprise: 0-1 at half time. But the Germans bounced back in one of the best 45 minutes of the tournament, played in another thunderstorm (it was quite a rainy tournament), scoring four water polo goals and conceding only one, resulting in a 4-2 win.

The Fall of the Half-Gods

With their long hair and fashionable clothes, the Ajax players had become icons of a new age, half-Gods. They were very gifted football players, but few of them lived for their sport. If some players were half-Gods in their own country, Cruyff was a God to many people in Barcelona, where he was called El Salvador (because he had brought them the first title in years), but he was also a heavy smoker. Some other players, like Ruud Krol, Wim Suurbier and Johnny Rep lived like rock stars. In the days before the final, German tabloid Bild Zeitung published an article on a wild party in and around the swimming pool of the Dutch hotel. Psychological warfare, no more than psychological warfare, the Dutch Football Association said in a press conference. Most people in Holland believed them, and accused the Germans of foul play before the game. But some player’s wives were alarmed, among them Danni Cruyff: she wanted her husband to come home immediately. Cruyff stayed in Germany, after he had promised his wife that this would be his last World Cup (he kept his word and did not play in Argentina four years later), but he was not with his mind at the game.

Holland took the lead in the second minute on a penalty kick by Neeskens, after a foul on Cruyff. No German player had touched the ball when the penalty was awarded and some thought the game was over before it had even started, especially when Berti Vogts, who was supposed to mark Cruyff, got a yellow card shortly after the penalty kick. But once again the Germans bounced back. The equalized from the penalty spot after Hölzenbein had been fouled by Wim Jansen, and gradually became the better team. Helmut Schön and his captain Beckenbauer (the real boss, some people said) had studied the Dutch game very well, and had noticed that noticed that Van Haneghem and Rensenbrink, both brilliant technicians, did little defensive work for the team (one thing they didn’t know, what nobody knew, was that Rensenbrink was injured, and had concealed his injury because he absolutely wanted to play). Anyway, Hoeneß and Bonhof were told to break, if possible, on the right, where there was no Jansen or Neeskens to stop them. The plan worked: a quick break on the right led to a half chance for Gerd Müller. The bomber didn’t even bomb the ball in – it wasn’t even a real shot – but there was no Van Beveren in the Dutch goal, only a Jongbloed, who did not react. Holland would dominate the second half, but wouldn’t score. 2-1 it was, 2-1 it remained. Ja, ja, ja, wir sind Weltmeister! Bild Zeitung headed only a few hours after the game.

Many Dutch fans thought their team had played against the Gods during the second half. Not only they had deserved an equalizer, they had deserved to win. Was this true? I’ve rewatched the game several times and read virtually all books and articles that have been written about it, and the only possible conclusion is: No, it wasn’t. Holland dominated the second half but the better chances clearly were for Germany. A second German penalty was denied by the referee and a second goal by Gerd Müller was disallowed for no discernable reason. So why didn’t we win in ’74 ?

We maybe had the better team, but it wasn’t our best possible team, some of the best players were left out of it. Those who were in the team had played well during the tournament, but they did not really live for their sport and were not focused on what they were doing. There was discord among the players and some of them weren’t focused on the final, for other than sportive reasons. Holland had started well, but their form had been in decline in the games against GDR and Brasil, and was awful during the final.

Germany had an excellent team too, probably, maybe, possibly not as brilliant as Oranje, but the players lived for their sport and were well-focused on the tournament and the final. Germany had been struggling initially, but had found their best form on the right moment: they had played rather well in the second round and were excellent in the final.

Holland did not play against the Gods in Munich. On July 7, 1974 the half-Gods fell from the heavens because of their own lack of discipline. 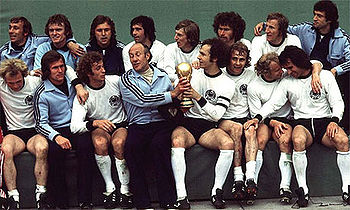