Winnetou: Last of the Renegades Review 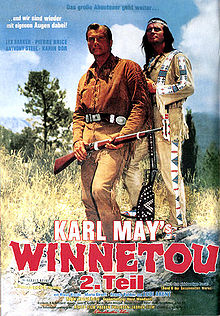 Unlike its predecessor, Winnetou the Warrior, the second part of the Winnetou trilogy has very little in common with the corresponding novel. The novel was still haunted by the evil Santer, who had killed Winnetou's father and sister but had escaped afterwards, and would only be killed in the final part of the Winnetou trilogy. Producer Wendlandt and his screenwriter Petersson had decided to give Santer just desserts at the end of the first movie, and therefore needed a new villain.

Producer Wendlandt first considered to adapt the so-called ‘Old Death episode’ from the second Winnetou novel – by far the best part of the book – to the screen, but this story involved the KKK, and Wendlandt thought this subject was too risky for the kind of movie he had in mind. Instead the Ribanna episode was chosen. In the novel it’s only a brief flashback episode, set in the time before Old Shatterhand traveled westwards and became Winnetou’s blood brother. Winnetou had fallen in love with Ribanna, the daughter of hostile tribe’s chief, but she had decided to marry a white man instead, no other than Winnetou’s friend Old Firehand. Old Firehand does not appear in the movie, but the story element of Winnetou losing Ribanna to a white competitor is respected.

In the first moments of Last of the Renegades, Winnetou rescues Ribanna, when she’s attacked by a bear. He wins the confidence of her people, the Assiniboins, who are lured into a war with the white men by the evil oil prospector Forrester, who wants to lay his hands on the natural resources of their land. The two young people fall in love, but Winnetou is forced to give her up when a young cavalry officer offers to marry the girl for the purpose of ensuring peace with the Indians. 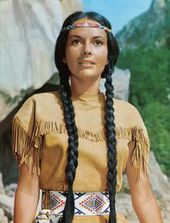 The bear fight in the beginning of the movie is clumsily staged, even though three bears of German Circus Althoff were flown to Croatia, along with their trainer who wore the Winnetou suit on the journey to familiarize the animals with it. But on the scene Winnetou actor Brice didn't dare to take the risk, so for the essential scenes the trainer had to wear a bear suit and replace the animals. It wasn't a good film for Brice at all, since one of his two horses died during the shooting. But the other action scenes are fine, an impressive explosion of an oil mine being a standout. For this scene, shot during four consecutive nights and supervised by pyrotechnist Erwin Lange, 3000 liters of fuel were used. Anthony Steel isn’t too bad, but Mario Adorf’s Santer is sorely missed. For two reasons this entry is a must see for spaghetti western fans: one of Steel's henchmen is played by Klaus Kinski (who is at his slimy best) and the cavalry officer who marries Ribanna is played by dark-haired italian actor Mario Girotti, who would later become world famous as the blond Terence Hill (my guess is they dyed his hair for this movie, not for the Trinities).

As usual the film is lovely shot on location in Croatia. The grand finale is set in the famous grotto complex of Postojna (for the first time filmed in colour for this occasion) and is absolutely stunning.