Winnetou: Thunder at the Border Review 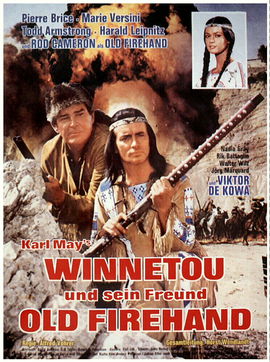 The penultimate entry into the series. Like Winnetou und das Halbblut Apanatschi it wasn’t even a real Winnetou movie: for both films an existing script was reworked to give Winnetou a place in it (in this case a script based upon the novel Thunder at the border by David De Reske). Winnetou and his friend Old Firehand play the "Magnificent Two" when they cross the border to help defending a small Mexican town beleagered by revenge hungry bandits. To complicate things even further, Winnetou is in the company of his sister Nscho-tsi. This would imply that the story is set before Winnetou I, the first part of the Winnetou trilogy (in which she was killed), still Winnetou is called chief of the Apaches, a title he only received after his father's death, at the end of part one. All this makes little sense. 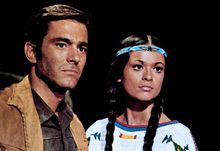 Vohrer directs more energetically than Reinl (the director of the Winetou trilogy), but seems unable to give any structure to his movie, that therefore looks very choppy, with some Winnetou scenes thrown in only to justify the title. What we're left with is a mediocre Sauerkraut Western, closer in spirit to The Magnificent Seven than to any of the other Winnetou movies. There are a few thunderous action scenes, but the film is marred by silly comic relief and a lot of sentimental scenes that are downright embarrassing.

Cameron, who looks very much like John Wayne in The Alamo (1960), seems even more out of place than Brice. He looks awful in his outfit of a mountain man, but seems to enjoy himself as Old Firehand, a man who - says he - never misses because he doesn't like to squander the price of even one singular bullet (he is clearly either Dutch or Scottish!). To give his presence some justification, he's given the opportunity to court an old flame, a hot-tempered redhead who's supposed to be a French madame from Paris, but looks more like a woman of easy virtue from Soho created by Charles Dickens. De Kowa, on the other hand, who plays a British gentleman madly in love with her, looks very much like French singer Maurice Chevalier with his fashionable clothes and white gloves. The film’s best performance is turned in by the relatively unknown Todd Armstrong, who plays Cameron's philandering nephew, who's so charming that even Winnetou's sister loses her head over him. But experienced viewers know that it's not a good idea to court this poor girl.

The make things even more bizarre and confusing, the version I saw had only German audio. With the French looking British and the British looking French, and all of them, (even the Mexicans and Indians) fluent in German, this must be one of the oddest European westerns ever.

Retrieved from "https://www.spaghetti-western.net/index.php?title=Winnetou:_Thunder_at_the_Border_Review&oldid=107638"
Categories:
Cookies help us deliver our services. By using our services, you agree to our use of cookies.