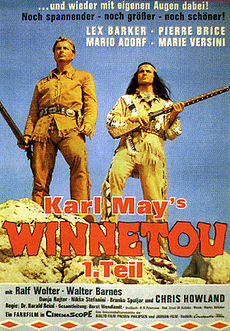 The construction of the Great Western Railroad, in the middle of the 19th century in the American West, creates heavy conflicts between settlers, the railway company and neighbouring Indian tribes. This is when criminal gang leader Santer (Mario Adorf) sets his eyes on a gold mine, which is located on holy Indian land. He then influences the construction supervisor, to change original planning and alter the railroad route straight through the Apache land. Old Shatterhand (Lex Barker), who works as a measurement technician for the Railroad society, discovers the evil plan and contacts with the Indians, in order to unite against the gangsters.

This was the first of a series of adaptations of Karl May's great travel novels. It starts the tale of Winnetou the Apache hero and Old Shatterhand (Karl May's alter ego), his white brother. A nice story full of adventure, and Reinl establishes his special brand of adventure/tale/sauerkraut-western. A must see, especially for people interested in German westerns. --Sebastian 16:12, 25 Aug 2005 (CEST)