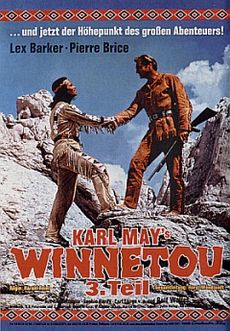 The third part of the the Winnetou trilogy was in fact the seventh entry in the series. After Reinl had completed Winnetou II, both Albert Vohrer and Harald Philip had made films with the Winnetou character in it, but with Stewart Granger replacing Lex Barker as Winnetou's white brother. While the Old Surehand movies were slightly tongue in cheek, this movie, with Harald Reinl again in the director's chair, turns back to the original ponderousness of the series. Winnetou is worrying about the survival of his people (or the native Americans in general) and is also having premonitions of his own death. Actually, the Winnetou character dies in a sacrificial act in the last minutes of the movie, making this the saddest entry in the series. But of course his death was not the end of the series. Some guys never give up.

Again the corresponding novel, the third in the trilogy, was hardly used. In the novel, Winnetou is killed by a warrior of the Sioux-Ogelala, a renegade tribe teaming up with a gang of train robbers. In the movie, the story is (once again) about villains trying to provoke an Indian war in order to confiscate the oil that has been found on their lands, and it’s the leader of these villains, Rollins, who fires the fatal shot. The film trilogy ends with the death and burial of Winnetou, the novels have a sort of coda, in which Old Shatterhand finally manages to hunt down Santer, the murderer of Winnetou’s father and sister. The evildoer is, in a highly symbolic scene, buried under the Apache gold he had been craving for all the time. Although the script is more focused than in the meandering Winnetou II, the film works better in parts than as a whole. Some story elements, like villain Rollins using Winnetou's knife to frame him for the murder of a young Jacarilla brave, are well-handled, but others, especially those with a more comical edge, don't work at all. Some of the more dramatic scenes in Winnetou III are so pompous that they become embarrassing. 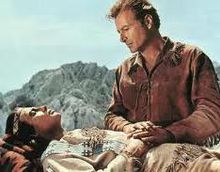 The hinge point of Karl May's vision on the West is the opposition between the noble savage and the renegade Indian, each one seconded by white men, respectively the benevolent frontiersman and the greedy businessman. While glorifying the purity of the noble savage, May could not escape from the idea that the noble savage was a Christian in the making: all you had to do, was bring them into contact with the Christian faith to awaken his religious consciousness. This idea is illustrated in Winnetou III in the scene in which Old Shatterhand and Winnetou travel to Santa Fe and the latter is touched by the sound of church bells ringing. The sentimental hodge-podge finally results in Winnetou offering his life to save that of his friend, by putting himself between Old Shatterhand and the bullet from Rollins’ rifle.

As usual, Reinl makes good use of those magnificent Croatian locations. A scene in which Winnetou escapes from his persecutors by using his swimming and diving skills, belongs to the most beautiful of the entire series. The scenes set in Santa Fé, were shot in the historic centre of Trogir, since 1997 included in the UNESCO list of World Heritage Sites. For the scene with Battaglia shooting buffaloes, stock material was used (previously used in Winnetou I), and there's a scene near the end with rafts and oil fires, that seems to be inspired by a similar scene in the Bond movie From Russia with Love. The film also contains some of the most horrifying examples of horse-tripping you'll ever see (if your censor doesn't cut them).

In the weeks before the film's release, production company Rialto hinted that Winnetou would be killed in the movie, which led to spontaneous protests organized by the children's magazines. Battaglia was booed at the premiere and later confessed that people continued complaining about his vile act for years, even though several films (all presented as prequels) had been made with Brice as Winnetou in the meantime. When Reinl asked him again for a Winnetou movie, he allegedly answered: Only if I don't have to kill the hero!