Winnetou and Shatterhand in the Valley of Death 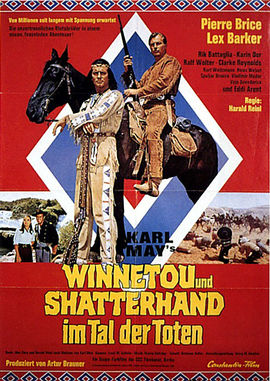 The Last of the Winnetou movies. It was produced by Arthur Brauner, not by Horst Wendlandt, who had started up the series six years earlier. Wendlandt and Brauner - and their respective production companies Rialto and CCC - were old rivals, and when Wendlandt declared that Rialto had decided to end the production of Winnetou movies, Brauner decided to give the series one last chance. For the occasion the film was directed by Harald Reinl, who had also directed the first Winnetou movie, Treasure of Silver Lake.

The script was written by Herbert Reinecker, one of Germany’s most prolific screenwriters (1). His script has little in common with the Karl May novel of the same name. In the opening scene Winnetou comes to the aid of a mortally wounded army officer, Major Kingsley, who is persecuted by bandits. The US Army thinks Kingsley has stolen a shipment of army gold and hidden it somewhere in a safe place in Mexico. His daughter Mabel believes in her father’s innocence and is given 60 days time to clear his name. Of course the men who have killed the major are now on her trail, because they think the girl knows the whereabouts of the gold, but luckily the famous frontiersman Old Shatterhand has read their evil plans …

Some pretty violent scenes make clear that a few things had changed since Barker and Brice had first played Winnetou and Old Shatterhand. A man who is trapped under a wagon is brutally executed by the bandits, and there’s a rather gruesome torture scene that shocked most fans of the series. But more violent or not: once you hear Martin Bötcher’s music (the friendship theme) you know you’re in Karl May Western Wonderland, peopled with larger than life heroes and villains, damsels in distress and Croatian Indians. And you can always be sure that Winnetou and his braves come to the rescue in the end, in true Cavalry style. 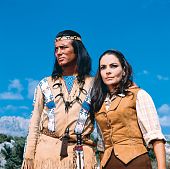 There’s a lot of action and the script by Reinecker is quite lively (if also more than just a bit trite). With Reinl back in the directional chair, the film is nearly entirely free from the tongue-in-cheek influences that actors like Stewart Granger (Surehand) and Rod Cameron (Firehand) had brought into the series. Ralf Wolter (as Sam Hawkins) and Eddi Arent (as Lord Castlepool) perform their comic routines, but they had been part of the series from the very beginning. There are a few remarkable scenes involving bees and snakes, and the finale in the valley of Death is a visually striking sequence, but overall the film can’t escape the impressions that the Karl May movies belonged to a bygone era.