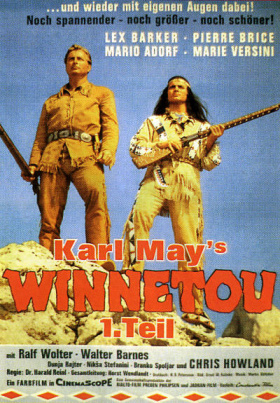 Despite the German title, this is not the first film of the Karl May series. It was made one year after the phenomenal success of Treasure of Silver Lake. The script is – for once - rather close to the novel it was based upon. However, a few changes were made. In the novel Old Shatterhand is a young German immigrant, who finds a new Heimat in the New World, in the movie his age is never mentioned, but he looks more like a man in his mid or late thirties. Santer - who appears relatively late in the book - is brought more centre to the story here (actually he has been merged with another villain, Rattler, who doesn’t appear in the movie). Moreover his fate is different.

An engineer is sent westwards by the Railroad company, to find out why the original plans for the projected railway have been altered, risking a war with the Apaches. Behind all this, is a villain called Santer, who is after the famous Apache gold. The engineer makes himself a name as a pugilist who knocks out every opponent with a single punch, and is therefore christened Old Shatterhand. When the Apaches, misled by Santer, launch an attack on the railway workers, Old Shatterhand is nearly killed by Winnetou, who’s unaware of the fact that Shatterhand has saved his life when he was captured by the Kiowas, the arch enemies of the Apaches. Winnetou plans to torture Old Shatterhand to death, but Winnetou’s sister, who has fallen in love with the prisoner, manages to prove that Shatterhand is a friend of the Apaches …

Winnetou the Warrior is no doubt one of the better entries in the series, but in the book there was more interplay between the two main characters, with Old Shatterhand gradually developing a fascination for the young warrior, risking his own life in order to save that of the other. This attraction, which eventually becomes mutual, is far less tangible in the screen version, where the decision to become blood brothers seems a little abrupt. Once more, the comic relief is the weakest part of the movie. There's an English reporter (called Tuff Tuff, no less) who wants to make photographs of Indians for his newspaper, the Oxford Times. Nearly all his scenes were cut for the international release, and never dubbed in English, so the only English character of the movie speaks German, while the Indians around him are fluent in English! There’s also the usual amount of silliness. In a particularly silly scene, a train is driven through a saloon. We’re supposed to believe that railway workers could lay the rails without the people inside noticing it!

Karl May's tales are, above all, morality tales. Although highly romanticized, the movie adaptations are far less didactic and preachy than the novels. May had been a failure as a school teacher and tried to make up for this in his writings. Moreover the novels are first-person narratives, suggesting they are personal experiences. Old Shatterhand is often called Scharlih by his blood brother, apparently a corruption of Charley (Charles/Karl). In the movies the emphasis is more on action than didactics, and May's emphatic (but at the same time rather vague) Christian message is neglected almost completely.

The beautiful Croatian landscape is even used to better effect here than in Treasure of Silver Lake. The Apache pueblo village was ‘built’ (it was no more than a façade) on a plateau overlooking the Zrmanja River (in the film called Rio Pecos); the vast panorama over the river and the surrounding hills would be a recurring element of the Winnetou movies. The opening scene and the finale, both set on Nugget Tsil, the place where the Apache Gold was hidden, were shot in Velebit National Park, near the city of Gospic. The tender scenes with Old Shatterhand and Nscho-tschi are shown against the beautiful scenery of the waterfalls of the Krka river. Barker is too old for his part (he was 44 at the time!) but hides his age well. Brice would play the Winnetou part all his life and Mario Adorf is an excellent villain. In the book Santer escapes after the killing of Winnetou’s father and sister, but producer Horst Wendlandt and screenwriter Harald G. Petersson thought this was too risky for family entertainment, so Santer got just desserts.

Retrieved from "https://www.spaghetti-western.net/index.php?title=Winnetou_the_Warrior_Review&oldid=133189"
Categories:
Cookies help us deliver our services. By using our services, you agree to our use of cookies.