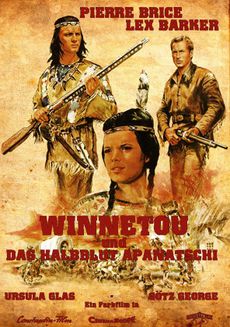 This movie got the same treatment as Winnetou und sein Freund Old Firehand, released later the same year: An existing script was reworked to turn it into a Winnetou story. Winnetou, Old Shatterhand and Sam Hawkins were smuggled into the storyline, and the villains Sloane and Pinky were clearly modeled after the characters Fat Jimmy and Tall Davy created by Karl May (their names were changed because Jimmy and Davy were 'good guys' in the novels).

Winnetou und das Halbblut Apanatschi seems primarily aimed at children, but there's also some influence of the spaghetti western, especially in the shootout near the end, creating a very incongruous movie, memorable only for Bavarian beauty Ursula "Ushi" Glas, who makes her real screen debut here - after a brief appearance in an Edgar Wallace adaptation - as the half-breed girl from the title. Due to her dark complexion Glas had often been called a half-breed when she was a child. But she had to be dubbed in the German language version because of her accent. Even in the fantasy world of Karl May half-breed Indian girls with a Bavarian accent apparently were beyond imagination. 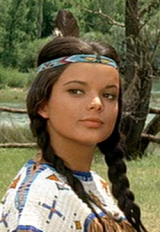 For her 21st birthday Apanatschi's father (Walter Barnes) gives her a gold mine, but two friends of the family, Pinky and Sloane, become greedy and start chasing the young girl and her little brother, after they have killed their father. Escaped from the evil couple, Apanatschi starts looking for Old Shatterhand, who is organizing the resistance of railway workers and the citizens of a small town, who are terrorized by Curly Bill and his gang. Things went from bad to worse with the Winnetou series. With a goldmine that turns good people into greedy monsters, the movie is slightly reminiscent of Winnetou I, but with the two story lines never really integrated, this film has very little momentum, and elements like secret tunnels and a boy stealing a feather from an eagle's nest for his sister's birthday, are almost completely ridiculous.

Apart from a particularly awful optical effect in the opening minutes, the special effects look quite convincing. When filming an explosion, a fire broke out, nearly destroying the entire Croatian western town near Crvena Luka. Works had to be delayed for a month to rebuild the town. To meet with the costs, several outdoor scenes were cancelled and take-outs of previous movies were used instead. It gives the film an even more static, almost claustrophobic look, with too many actors walking around and not knowing what to do. Barker and Brice look uninspired, but Götz George, in his third Winnetou movie, turns in a nice performance as a nimble-fingered magician who uses his tricks to ridicule his opponents. But he would have his glory days in Tatort, not in these movies.

Retrieved from "https://www.spaghetti-western.net/index.php?title=Winnetou_und_das_Halbblut_Apanatschi_Review&oldid=95249"
Categories:
Cookies help us deliver our services. By using our services, you agree to our use of cookies.