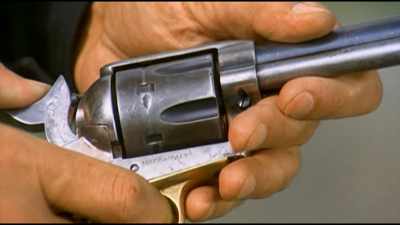 A man is working at clearing vegetation in a field when another steps up behind him. The camera starts at the man's black boots and rises slowly to the gunbelt strapped to his thigh. The Colt pistol is removed from the holster and loaded by the anonymous man and in so doing some stamped lettering can be read on the side of the weapon. It reads "Made in Italy". I have no idea if this was an oversight on the part of the filmmakers or a deliberate inclusion designed to entertain the observant viewer. Either way it pleased me enough for me to approach the rest of The Wrath of God (for it is the opening of this film which I have just described) with a smile on my face and a forgiving nature in my heart. Any film with that kind of beginning is goning to get brownie points from me no matter what. Thankfully, the rest of the movie didn't disappoint.

Mike (Brett Halsey) returns home in order to leave his gunfighting days behind him and settle down on a farm with his old sweetheart but things do not go as planned. Finding Jane murdered, Mike is set upon and left for dead by her seven killers who also steal his life savings of $10,000; all in $50 dollar bills. They leave only seven dollars and Mike vows to track down every man, paying him back with a solitary dollar and death.

A Spaghetti fan of any length of time will recognise some pretty familiar conventions here. In fact it would be fair to say that pretty much every element of this film is derivative of others in the genre; from the revenge for the murdered sweetheart motive to the episodic 'picking off' of each villain structure to the 'surprise' chief villain reveal at the end. Even the seven dollars left behind by the murderous gang was used before. In fact by Cardone himself in Seven Dollars on the Red. But despite it's recycled nature this is a thoroughly satisfying film and is a credit to all involved. Cardone directs competently despite a clearly restricted budget, Mario Pacheco shoots the film with some flair and the cast play their parts well, maintaining a consistant mood and overcoming any of the film's more glaring flaws. And flaws there most certainly are. Looming large among them is the weak ending which, althogh crafted as a surprise, is anything but. Being so predictable as to be almost an offense to the audience's intelligence. I won't give details here just in case, by some stretch of possibility, someone doesn't get it while watching but, in reality, I could probably reveal all without risk of being accused of any major spoilers. Equally strange, although far less important, is a scene in which Halsey has a duel with one of the bad guys in a pitch dark room. In this scene we are not only asked to accept the use of luminous paint as an acceptable device but, more bizarrely, get to watch as the defeated bandit jumps out of the room at Halsey despite having just been defeated by a bullet in the forehead! 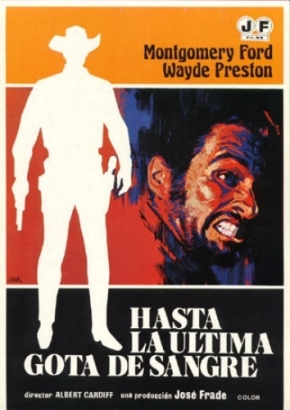 The fact that such sloppy lapses did not dull my enjoyment of the film in any great way speaks volumes for the quality on show for the rest of the picture. Halsey is at his coolest and plays a great hero with quintessential style while always looking magnificent. Anthony Steffen should have taken note. This is how to wear a hat! Not to mention a very fetching black serape and a rather natty waistcoat. He also carries off the action sequences with skill and is believable in a dramatic sense while wisely keeping his lines to a minimum. Of the seven, or rather eight bad guys involved Wayde Preston and the ever dependable Fernando Sancho are the stand outs while Cardone shows his deft touch with a fight scene in the excellent one on one knife fight in the desert between Halsey and Franco Fantasia. A scene which uses an overhead POV really effectively and challenges Cardone's other great fight scene, the finale of Seven Dollars on the Red featuring Fernando Sancho and a baling hook, for tension and style.

All in all this is a very solid and satisfying slice of Spaghetti pie. Its failings of plot, predictability, occasional lapses in logic and highly formulaic structure are more than made up for by its sound direction, interesting photography and solid acting performances. Not to mention an effective score written by and featuring the delightful trumpet playing of Michele Lacerenza, veteran of the Dollars films of Leone. The film is a fine example of good genre film making. It delivers what the viewer wants with more style than the budget would seem to allow and leaves with one a sense of satisfaction in having enjoyed an hour and a half of good quality fun. This is what Cardone is good at. He was no master in the Leone or Corbucci mould but he made good qualty, enjoyable films and always seemed to do the best possible with the resources he was given. I like Cardone's films and Wrath of God sits comfortably among his clutch of highly recommendable works.

Unfortunately I do not know of an official english friendly release of this film. I was lucky enough to view an excellent fan dub which used what looks like the Italian Eagle Pictures release as its source and added english subs. It is a film well worth an english language release. In fact, what would be even better would be an Alberto Cardone box set featuring all of this director's very enjoyable westerns. Now there is a project for Koch Media to consider.