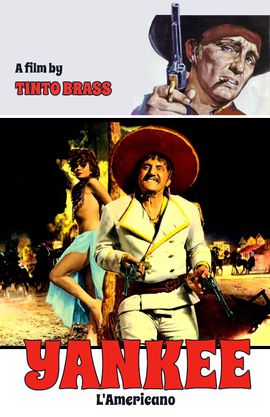 A spaghetti western directed by no other than Tinto Brass. Rapid editing of the action scenes and an overall feeling of alienation make up for an all too familiar storyline
____________

Thematically Brass' western is a not-so-special variation on the A Fistful of Dollars formula. Philippe Leroy is the stranger in town who smells money when he's told - by the local gravedigger - about a man called The Great Concho, a megalomaniac bandit who has supreme power over the region. Concho is living in his own palace, a church no longer required for public worship (instead he is worshipped!), surrounded by an army of henchman. In the sheriff's office, the stranger notices that Concho and his men all have a price on their head and therefore represent a fortune. The Yankee concocts a scheme to eliminate them all, and collect the bounties.

That's the movie we know, but apparently not the movie Brass had in mind. His material was taken away from him and re-edited to make the whole thing look more like a spaghetti western à la Leone. Brass was influenced by the paintings of Dali and De Chirico and the psychedelic fumetti, Italian comics, by Guido Crepax (*2). He had also wanted to construct his movie like a bullfight, with Leroy in the role of the torero teasing and agonizing his victim before giving him the estocada, the pierce through the heart. In spite of the producers decision to interfere, some of Brass' original intensions still shine through: the action scenes are marked by the rapid editing techniques of Brass' experimental movies and many scenes - especially those in the church - breathe a certain psychedelic atmosphere. 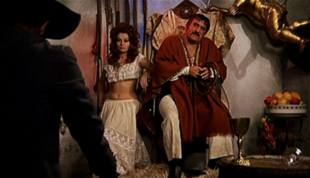 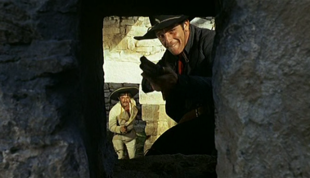 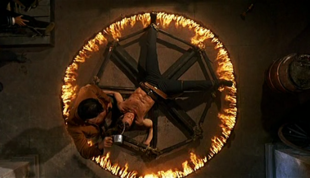 Brass' editing techniques and unusual framing (often showing only one eye of a character) make up for a familiar, all too familar storyline. Initially his western is a bit too talkative, but the action picks up in the second half with a series of brisk action moments and some grotesque imagery, Freudian and Biblical symbolism galore. Concho's girlfriend (Mirella Martin) is tied naked to a totem pole and Leroy is symbolically crucified on a wheel of fire (no, Johnny Cash does not perform the theme song). Leroy is not very convincing as the stranger, but Celi is quite remarkable as the villainous Concho, a cross between the traditional Sancho type of Mexican bandit, a Mafia Don and a depraved Roman emperor.

Simon Gelten is a long time contributor to the SWDb. "I'm not as old as Tom B. but I'm working on it. I hope to catch up with him by the end of the next decade.", he says. Simon saw all movies by Sergio Leone and several by Sergio Corbucci in cinema, most of the time in Eindhoven, the city where he was born. Currently, Simon is living in Turnhout, Belgium. Simon is active within the database as both Scherpschutter and his alter ego Tiratore Scelto.
Retrieved from "https://www.spaghetti-western.net/index.php?title=Yankee_Film_Review&oldid=109897"