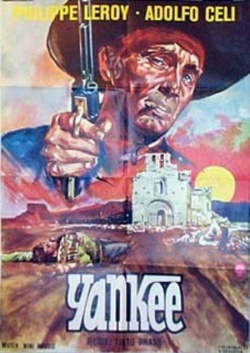 There are a number of Spaghetti Westerns made by and featuring artists with little or no experience of the genre where their lack of understanding for its conventions result in a disappointing mishmash. Rapidly increasing popularity of eurowesterns led to bandwagon jumping from all sides and many directors and actors chanced their arm in the genre only to fail and withdraw. Thankfully, that is not the case with Yankee. Although this is Brass' sole venture into the Spaghetti Western field he produced a film who's look and feel is right at home in the genre.

Yankee, (played by Philippe Leroy in his first western) is a bounty killer who decides to take on a bandit chief and his henchmen when he realises the prices on all their heads adds up to a tidy sum. The bandit, El Grande Concho, is lord of the entire region and resides like a king at court in an abandoned church surrounded by his entourage of philosopher, painter, fortune teller and soldiers; robbing and murdering anyone who ventures into his territory. Add to this a shipment of gold big enough to make them all rich beyond their dreams and the stage is set for gunplay, intrigue and cruelty as the lone gunman sets his wits and skills against the might of the megalomaniac leader.

Leroy does a sound job as the eponomous anti hero but the scene stealer here is Adolfo Celi, better known for his portrayal of Spectre agent Emile Largo in the 1965 Bond film Thunderball . His combination of physical presence and exuberant cruelty make El Grande Concho a truly memorable screen villain. In fact, in many ways Concho is very much like a Bond villain. Arrogant and confident in his own power, he plays with Yankee after capturing him at one point in the film and chooses to keep him tied to a star wheel rather than merely kill him which would have been more sensible. Parallels with Austin Powers and Dr Evil spring to mind at these points but it doesn't matter. The tone is right for the film and the pantomime villain nature of the character satisfies all our genre requirements.

What is equally satisfying is Tinto Brass' excellent visual style. Interesting and original framing combined with rapid fire editing results in a truly memorable end product where tension is built skillfully and the viewer is never bored. Ultra close ups 'a la Leone' are given an original twist by showing only half a face; concentrating on only one eye rather than two. Points of view are switched to above and below while tense scenes shot on location are often entwined with flashes of obviously staged, interior shots of faces, coins, guns etc. As a result there is a self reflexive feel to the final product; making the viewer aware of the constructed nature of the film without disengaging from the world of its narrative. Considering Brass' reputation is based usually around his highly erotic films such as Caligula and Salon Kitty, I was pleasantly surprised by his consumate skill behind the camera and his ability to find interesting variations on how to shoot in this genre without losing touch with its essentials.

The soundtrack from Nino Rosso is based around a single theme tune but its catchy nature and the variating ways in which it is used makes it effective without being outstanding. It's a tune which sticks with you though, so don't be surprised if you are still whistling it a few days after watching the film. I was.

Yankee is one of those Spaghettis that are not widely known of outside the hardcore enthusiast circles but it is a film well worth tracking down. Thankfully, this is not so hard now as it has had a recent DVD release in Germany by Koch Media which includes an italian language version with english subtitles. (The english subs are not mentioned on the cover but they are there none the less) This is a first class DVD release with excellent picture quality and crystal clear sound and makes Yankee a pleasure to watch. Moreover, because of the beauty of the internet it is easily acquired online wherever you may live.

I am a firm believer that a clear widescreen picture makes even the most mediocre film more enjoyable, so when you have a good quality film (which Yankee is) to start with you really can't go wrong.

Highly recommended for fans of the genre.