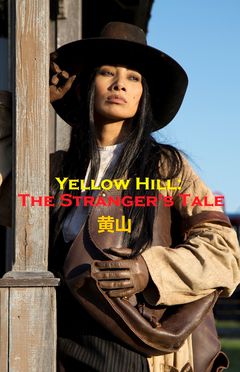 Yellow Hill: The Stranger’s Tale (See Database Page) is a short western movie developed, produced and directed by Ross Bigley, co-developed, co-produced and starring Chinese-born Bai Ling, probably best known for her appearance alongside Brandon Lee in The Crow (1994). It can be watched as a stand-alone short, but it was set up as an introduction to an upcoming feature length movie called Yellow Hill.

The entrance of the Stranger is similar to the introduction of the Man with No Name in Sergio Leone’s A Fistful of Dollars or the mysterious avenger in Clint Eastwood’s High Plains Drifter: he’s a figure in the landscape, appearing out of nothing, a ghost-like apparition taking the shape of a person while entering a hostile world. Unlike the Man with No Name, the Stranger is a woman, and unlike the drifter from the high plains, she’s on foot. And note the way she walks! She’s not contemplating or examining things, not biding her time or calculating her actions, she’s fast, determined, as if she's saying: "You can tell me everything you want, Mr. Leone, I don't stroll on the tones of Mr. Morricone, I'm fast, and I'm furious ... Here I come ...

The Stranger is on her way to the small mining town of Rock Ridge, a place where strangers aren’t welcome. Just out of town she is spotted by a cowboy, one of the kind who likes to shoot first and ask questions later. She plays dead but literally springs back to life when the gunman approaches her to check if his bullet has done its dirty job and rob her from all things valuable. After neutralizing the aggressor, the Stranger continues her way to town. The first thing she is told, by Lyle, the local bartender, is to go look elsewhere for fire water, because Indians aren’t served in his saloon. It’s only when she raises her head and looks the bartender in the face that he realizes he has made a mistake. His reaction is significant:

Yellow Hill, the feature length movie, will be about celestials, Chinese immigrants who came to America in the 1860s, about their hopes and dreams and the hardship they found (2). The short isolates a few elements from the feature's script, related to the character of the Stranger and her estranged father. Like many young Chinese girls, the Stranger was sold into prostitution because her father needed the money. A couple of flashbacks, filmed in harsh black and white (with a few desaturated colors added) which reveal a history of abuse and humiliation. But today she is free person, a person with a mission: to retrace her father and find out what happened to him. The only one in town willing to help her, is another Chinese woman, working in the saloon, most probably as a prostitute, all others want to get rid of her, as quickly as possible ...

Yellow Hill- The Stranger’s Tale was made on a $10,000 budget (half of it was raised by crowd-funding) and shot in South-Dakota, in the Badlands and the original South Dakota 1880‘s western town. The character of the stranger - whose arrival in town literally changes everything - is clearly modeled after Sergio Leone’s Man with No Name and the movie remains tributary to the spaghetti western throughout, but there are also nods to classic Hollywood (notably John Sturges' 1955 noir-western Bad Day at Black Rock, which has a similar premise of racism towards immigrants and an isolated town trying to hide its dark secrets). The fast pace and some of the imagery owns a lot to Tarantino or the Warchovskis: instead of Leone’s ritual build-ups we get a series of scenes which quickly - often without warning - discharge into violence. Yellow Hill: The Stranger’s Tale is a wonderfully made, very well acted short; it offers thirteen minutes of fast-paced, often furious story-telling, explosive action, bad ass characters and a cigar smoking, gun-toting heroine who is a sexy as she is lethal.