Review of 6 Bullets to Hell by Kevin Grant

Opening with the sturm-und-twang of Ennio Morricone’s ‘Seconda caccia’, from The Big Gundown, and the killing of a cowering priest, 6 Bullets to Hell signals its intentions even before the rotoscope-style credits gambol across the screen. Assembled on a miserly budget by a coterie of genre aficionados and shot entirely in Almería and its environs, this US-Spanish co-production is an unabashed love letter to the overheated vendetta westerns that rolled in this region in the Sixties. The evocative music and familiarly arid scenery are complemented by characterisations, costumes and gurning close-ups culled from the Euro-western stylebook, while Olivier Merckx’s radiant landscape photography achieves a resonance that more than compensates for the rudimentary plot. Its premiere at this month’s Almería International Western Film Festival ought to be one of the event’s hottest tickets. 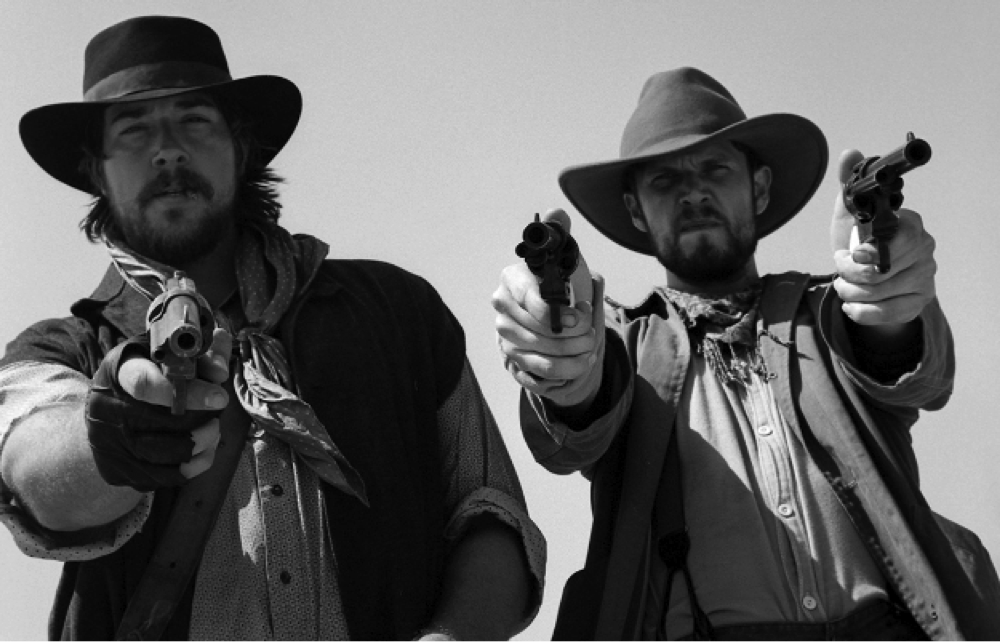 Events centre on the Bobby Durango gang, who follow up ecclesiastical homicide by raping and murdering Grace Rogers on her isolated farmstead, deep in the American southwest. Bobby displays his ruthlessness by hanging one of his own men when he pleads for the woman’s life. They proceed to rob the town bank but, in the meantime, Grace’s husband, Billy, has discovered her body. Inevitably, Billy is a former gunfighter, and he resurrects his old persona to pursue the bandits one at a time, overcoming stock Euro-western obstacles – a hair-trigger card game that ends in violent death – and some rather hapless opponents – including a London-accented Native American, who injects a welcome dose of eccentricity. Equally inevitably, given the influences active on the film, the scene shifts to Mexico for the final reckoning.

In the spirit of the old Serie B westerns, the story is little more than a framework. The film-makers have not aspired to the grandiosity of Leone or Sollima, or the political point-scoring of Corbucci. Co-directors Tanner Beard and Russell Quinn Cummings approach their bare-bones revenge plot with the same ruthless economy demanded by the production as a whole – at just under 80 minutes, there is scarcely scope for diversions or thematic tangents. Despite or because of this, 6 Bullets is actually more representative of the genre in its heyday – the kind of rough-and-ready, no-frills fare savoured by grass-roots audiences in second-run cinemas – than something more expensive and prestigious such as Django Unchained, which proclaims its allegiances and inspirations with greater ostentation.

As well as being shot in Almería, the film was conceived there, when actor-producer-director Tanner Beard of Silver Sail Entertainment met Danny García and César Méndez of Chip Baker Films at the 2012 Almería Western Film Festival, where Beard’s The Legend of Hell’s Gate – an engagingly offbeat slice of pseudo-history – was among the winning films. Beard, a lifelong fan of Euro-westerns, eagerly seized the opportunity to shoot in iconic locations in and around the Tabernas desert, plus the well-maintained sets at Mini Hollywood and Fort Bravo. This was indie cinema in a very real sense; there was no support from the regional film commission, and several of the actors and production staff pulled double duty. Both directors have prominent roles: Beard as the callous and egotistical Bobby Durango; Cummings as the sheriff who comes to Billy Rogers’ aid. Their fellow producers, García and Méndez, have minor roles (García chews up the scenery in the grand Euro-western tradition as a duster-clad “son of a bitch” who pays with his life for interrupting Billy’s lunch; Mendez appears as a newsman, listening to Billy recounting his tale). Supporting actor Aaron Stielstra, who essayed a spaghetti-style bounty hunter in 2011’s The Scarlet Worm, provided much of the incidental music, while cinematographer Merckx plays the priest gunned down by Bobby Durango in the opening scene.

Just as numerous Euro-westerns, particularly in the early days, assigned the lead role to an Anglo import, so 6 Bullets to Hell posits Britain’s Crispian Belfrage as the aggrieved antihero. No stranger to the Euro-western, having appeared as a Pony Express rider in Terence Hill’s Doc West and Triggerman (both 2009), Belfrage imbues Billy Rogers with the requisite intensity. He gets plenty of mileage from a penetrating hard stare, judiciously captured in close-up, and an increasingly haggard, haunted expression. He radiates hatred and communicates – partly via voiceover – an obsessive and ruthless mind-set that denies him easy access to the moral high ground – he is not above executing unarmed opponents, for example. “Life can be a son of a bitch… can turn you into the devil you were before,” he muses, forging a connection with every tormented western protagonist who tried to outride his demons, from The Gunfighter’s Jimmy Ringo to Unforgiven’s Will Munny. 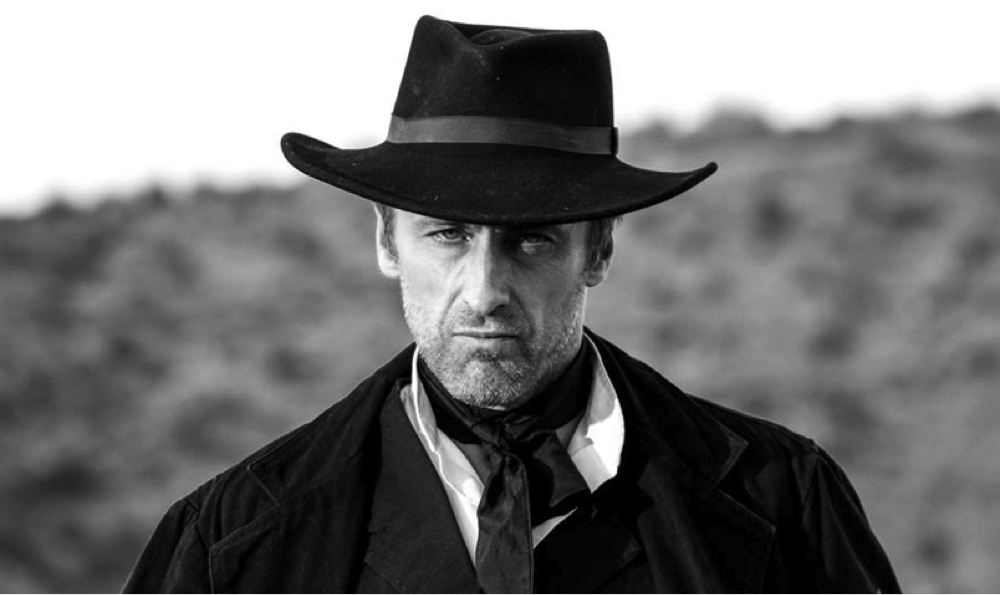 As well as being struck by his colleagues’ willpower and collective work ethic (see The Resurrection of the Euro-Western), Belfrage was impressed by his hosts. “The Spanish were fantastic to work with and they all mucked in. They know they live in a special part of Spain, a sort of secret place, yet they are all very humble about what they have and can do. In this area they are all very talented horsemen and gunslingers, and so when it was needed I got all the help I wanted to make the fight scenes and riding scenes work. But this is the fourth western I have done, so I am starting to get the hang of riding horses.”

The real star of 6 Bullets to Hell, however, is arguably the landscape, ranging from the dusty ramblas of Tabernas to a rocky plateau on the outskirts of Abla, near Granada, where Billy and Bobby settle their account. The scenery is captured in all its austere majesty and changing moods by Merckx’s dynamic photography, rounded off by some dizzying aerial shots (courtesy of Spain-based specialists José Antonio Vela and Krasi Ivanov) during the finale. In a visual sense, the level of detail may not match that of Techniscope, but 6 Bullets demonstrates that digital photography, in the right hands, can deliver impressive results. Indeed, when the budget and schedule are as tight as they were in this case, it may be the only viable option. “We all love film, but it’s just not practical [for us] to shoot on film,” says Tanner Beard. “The great thing about making movies digitally, however, is that there are so many advanced technologies in editing where you can make the picture look any way you want. Not everyone has the budget in post-production to create that, but the option does exist.” 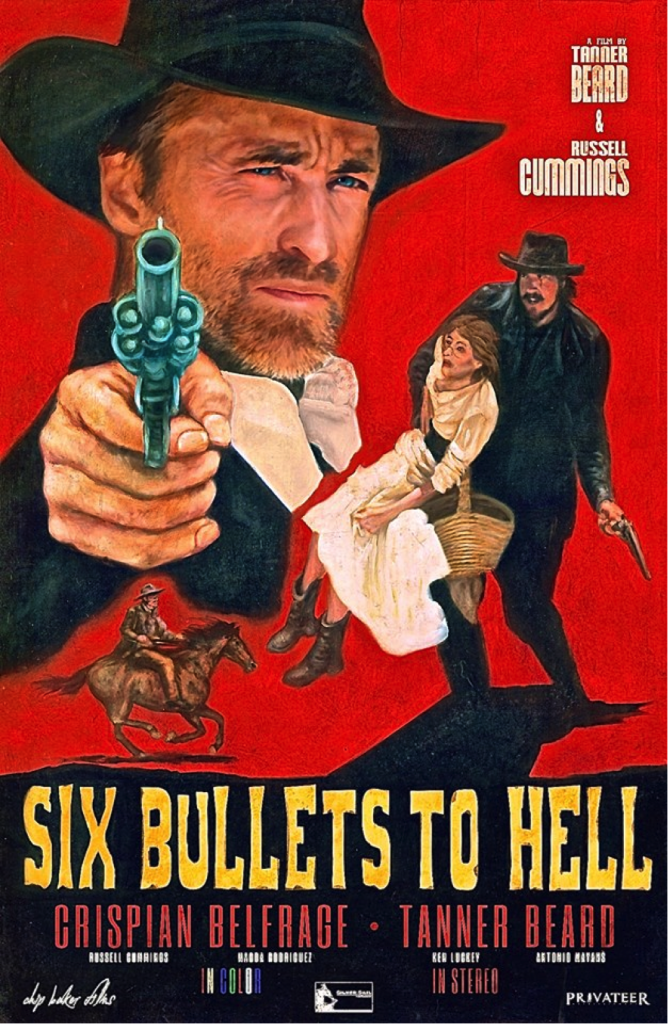 Beard and co. could well be venturing back to southern Spain in the near future. “Silver Sail Entertainment actually has two films in the works that may shoot in the Almería area,” he says, “and one is a very cool spaghetti western.” Chip Baker Films, too, is planning another genre piece, currently titled Reverend Colt (no relation to the 1970 Guy Madison/Richard Harrison entry). As a tribute to the spaghetti westerns of yore (perhaps the under-used ‘paella’ epithet would be more appropriate), 6 Bullets to Hell may not be quite a full repast, but it is a satisfying taster of things to come.

Kevin Grant's fascination with European westerns began when he saw A Fistful of Dollars as an unsuspecting child. He began writing about them in legendary fanzine Blood, Money and Vengeance and similar publications, and eventually corralled his thoughts on the genre in the book Any Gun Can Play: The Essential Guide to Euro-Westerns.
Retrieved from "https://www.spaghetti-western.net/index.php?title=6_Bullets_to_Hell_review&oldid=100642"
Category:
Cookies help us deliver our services. By using our services, you agree to our use of cookies.