A Pistol for Ringo Review 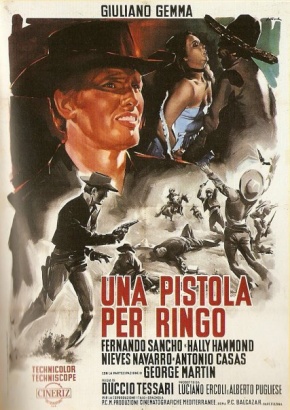 One of the most successful films of the early stream of spaghetti westerns, A Pistol for Ringo follows the example of Leone's A Fistful of Dollars, in the sense that Ringo, the character from the title, still is a passer by like The Man With No Name, a person who accidently gets involved in the drama, and not yet an avenger in the Django mould, who comes to a place to get even with a murderous villain. This is no surprise, since director Tessari was one of the co-authors of Leone's first western. But Ringo is not a No Name clone. Just look at the way the character is introduced: he's playing with a group of children while he is addressed by four guys. Before we know what is going on, he shoots all four of them. There's no ritual build-up here, no musical crescendo announcing the eruption of violence. The wonderful scene says: I'm a cheerful fellow, but don't mess with me! From the beginning, A Pistol for Ringo was meant to be a lighter, less cynical version of the western Italian style, with Giuliano Gemma playing a clean-shaven, more fashionable version of Eastwood poncho-clad drifter: his knick-name would be Angel Face, and he would not wear a poncho but a suit. Actually, his style of clothing is modelled after the clothes Gary Cooper is wearing in High Noon.

The film has a unique setting within the days leading up to Christmas, not a period easily identified with the world of the spaghetti western. In the first scene two people approach each other in the main street of a western town. Normally this means trouble, but this time Christmas greetings are exchanged instead of bullets. The film even has a symbolic scene with Gemma waking up on Christmas Morning in a stable, but we're still in a spaghetti western, so this Christmas won't be a peaceful one. A gang of Mexicans have crossed the border and robbed the bank. While they try to get away, their leader (Fernando Sancho) is hurt, and in an attempt to shake off their persecutors, they take refuge in a nearby ranch and take the occupants hostage. Sancho threatens to kill two hostages a day until he and his men are allowed to leave. The sheriff is reluctant to take action because his fiancée is among the hostages. The only one who can possibly help him, is a gunslinger named Ringo, who shot four men out of self-defence but was arrested nevertheless and is now spending his Christmas in jail. The sheriff promises to set Ringo free if he is willing to infiltrate the gang and find a way out of the status quo ... 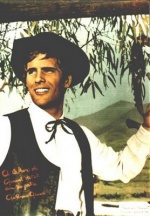 Tessari tells his story very effectively, with acute dialogue (you'll learn what made equally born men different) and interesting plot twists. The film even has a endearing and tragic love affair between a female member of the gang (the gorgeous Nieves Navarro), and the much older aristocratic ranch owner (Casas). Only the ending is a bit silly, with Gemma using a bell to deviate his bullet in order to shoot Sancho, who would otherwise be out of reach. Many critics thought Tessari's film was closer to Hollywood than Cinecittà , and indeed a Hollywood movie (albeit not a western) served as inspiration for the script: William Wyler's Desperate Hours (1955), a gangster movie with Humphrey Bogart, about three convicts terrorizing a family in an American suburb. The name Ringo, is of course of Hollywood origin too: both John Wayne (in Stagecoach) and Gregory Peck (in The Gunfighter) played a character with this name. Some have linked the name to the song Ringo, sung by Lorne 'Bonanza' Greene, that was translated in Italian for Adriano Celentano (one of the country's most popular artists) and a hit in Italy in both versions (1). It's interesting that Tessari already proposed the name Ringo to Leone (for what would become the No Name character), who didn't like it, allegedly because he had read about the historical Johnny Ringo, a member of the Clanton gang (John Ireland's character in Gunfight at the O.K. Corral is based on this person). It's also interesting to hear from Tessari, that he sees the Ringo from A Pistol for Ringo as a Sturm und Drang personality, an angry young man, not accepted by a society he cares much about and wants to change desperately.

A Pistol for Ringo was released in Italy in May 1965, and shortly before Christmas the same year in Spain, and was an instant success in both countries. It made a star out of former Italian stuntman Giuliano Gemma, and told the industry that a successful western could be made without importing an expensive American actor (Eastwood worked for little money on his first film, but soon learned how to squeeze Italian producers). In Spain audiences were fascinated by the Spanish locations and the names of several Spanish actors in the cast. For both Sancho (who had previously appeared in Corbucci's Minnesota Clay) and Navarro it was a breakthrough movie, resulting in a series of invitations for spaghetti westerns. Tessari first wanted Fernando Rey for the part of the old aristocrat, but when Rey turned out to be engaged, the Spanish co-producers pushed forward the name of Antonio Casas, a former soccer player for Atletico Madrid (and a notorious ladies' man).

For an early spaghetti western the film is surprisingly non-violent, even though the body county is pretty high and there's one outrageous scene with Sancho executing Mexican peons, that would inspire Sergio Corbucci to a similar (if more sadistic) scene in Django. The film's lush photography is breathtaking; both indoor and outdoor scenes are shot inventively. Tessari's use of the widescreen is impressive, but this means the film suffers severely when it's not shown in the right aspect ratio, like on most VHS tapes and the Japanese SPO disc (see under DVD info). Morricone's score is, needless to say, very fine. Maurizio Graf sings the title song (lyrics by Gino Paoli) Ringo had an Angel Face, but whenever Ringo loved, Ringo fought. However, some of the lyrics, seem more appropriate for the film's sequel Return of Ringo : and the woman who's waiting for his return. There's no woman waiting for Ringo to return in this one.

DVD info: I watched the French Seven7 DVD, called Un Pistolet pour Ringo, which is a very nice disc, with good image quality, showing the film in its OAR of 2,35:1, but only with French audio. As already mentioned, the overpriced SPO disc actually was a bit undersized, showing the film in a ratio of only 1,85:1. Recently a few English friendly discs have been released, a Thai release by Triple X Video, which reportedly has acceptable image quality, and (finally) the much awaited release by Koch Media in their rainbow series; you can read Sebastian's (German) review of the disc here. For more info on the various releases of this movie, see : Una pistola per Ringo/DVD 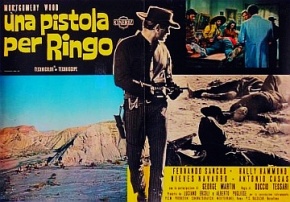 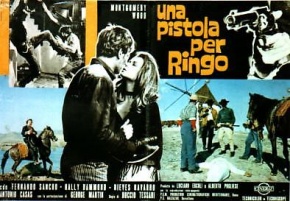 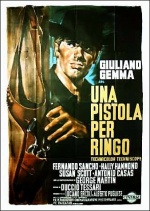 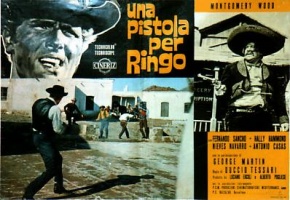