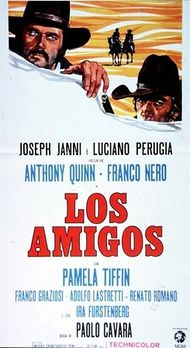 In this unusual spaghetti western departure for exploitation filmmaker Paolo Cavara (La Tarantola dal Ventre Nero), two friends help Sam Houston work for Texas statehood. Johnny Ears (Franco Nero) and his deaf-mute sidekick Erastus "Deaf" Smith (Anthony Quinn) go after a Mexican general (Franco Graziosi) under orders from Germany to agitate the populace. The film looks terrific, thanks to cinematography by Tonino Delli Colli (Once Upon a Time in America), but is often lacking in the story department. Perhaps part of the blame belongs to co-screenwriter Harry Essex, fresh off the dreadful sci-fi flop Octaman (1971). Pamela Tiffin appears as a prostitute, and the film co-stars Tom Felleghy and Renato Romano.

A 'Spaghetti Western' Without Meat (Published: July 26, 1973) "Deaf Smith & Johnny Ears," the Italian-made, English-language horse opera shot in Spain that clattered aimlessly into local houses yesterday, is as limp an example of the so-called "spaghetti Western" as has turned up in recent memory. Anthony Quinn and Franco Nero are the titular heroes who stop Franco Graziosi, as a would-be dictator, from taking Texas from President Sam Houston in 1836. They are ineffectually involved in an ersatz adventure that is neither as explosive or as funny as most movies in the genre it tries to emulate or lampoon.

The gimmick here, if you have not already guessed, is Mr. Quinn playing a deaf-mute whose "ears" are supplied by his tough sidekick, Mr. Nero. As a veteran movie vaquero, Mr. Quinn is properly saddle-weary and weath-erbeaten in a floppy sombrero and a worn, dusty Prince Albert frock coat. He is also handy with his fists, sticks of dynamite, a Gatling gun and rudimentary sign language. Unfortunately, neither he nor the action has much to communicate to a willing viewer.

Mr. Nero, handsome if unshaven, projects an overacted machismo that is pointless, especially when it is channeled toward comedy that rarely registers and Pamela Tiffin is merely naive as a pouting, babyish blond prostitute. "Deaf Smith & Johnny Ears" also has a couple of scenes in an ornate bagnio seemingly inspired by Toulouse-Lautrec, but they are no reason to visit this simulation of frontier Texas.

Retrieved from "https://www.spaghetti-western.net/index.php?title=Amigos,_Los&oldid=128744"
Categories:
Cookies help us deliver our services. By using our services, you agree to our use of cookies.