An interview with author Michael Hauss

On the occasion of the release of his latest book, I spoke to Mike Hauss, regular contributor and long term member of the SWDb community, and author of numerous articles and recently a series of books about film, and in particular the spaghetti western. 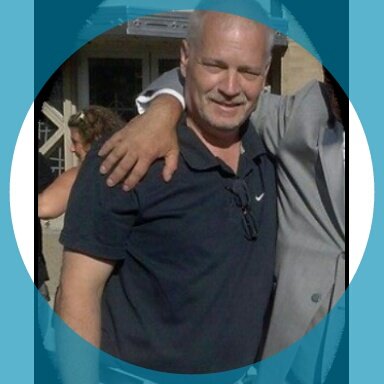 Sebastian: What first got you into spaghetti westerns? Do you remember specific experiences?

Mike: In November 1981, my brother asked if I wanted to see a new 3-D western playing at the Tri-County Cinemas in Springdale, Ohio. That film Comin' at Ya! started me on my Italian western obsession that continues to this day! Before that, I remember watching A Fistful of Dollars with my father on television when it was first released to that medium in the USA with the Harry Dean Stanton filmed opening. I had also seen My Name is Nobody in the summer of 1975 at the Drive-In. Back to Comin' at Ya!, after that viewing, I found an article in a local newspaper about Tony Anthony, the star of the film, and it made a note of his 'Stranger' films, which were the first films I purchased through the gray market in the mid-1980s! But long before I even knew what a Spaghetti Western was, I was a fan of western movies, especially the "B" westerns that played every weekend on Cleveland Ohio UHF stations in the 60s and 70s.

S: What is your personal favorite?

M: I have to say that The Good, The Bad, and The Ugly is my favorite and a movie that, no matter how many times you have viewed it, it still sucks you in again and again!

S: Which character in a spaghetti western has left an impression on you?

M: The first time I had the chance to view the film, Black Jack, was in the early 1990s, and since that time, I have obsessed over both the film and the character Black Jack Murphy endlessly. I have even had the chance to interview Robert Woods twice. The horror aspects of the film are what drew me in, along with the terrific performance of Robert Woods transforming from a man into a human monster. Black Jack borrows bits and pieces from the Edgar Allen Poe short story The Fall of the House of Usher and some visuals from the 1960 Roger Corman film House of Usher, like the brother-sister component and the ending.

S: Which popular spaghetti western do you hate?

M: I cannot honestly say that I hate any Spaghetti Westerns besides some of the comedies!

S: Which unpopular or niche spaghetti western do you love?

M: While not a fan of comedy-westerns, I must admit that three I enjoy but have found are not highly thought of in the Italian western fan community are They Believed He was no Saint, Dallas, and Jessie and Lester. Anthony Steffen in They Believed He was no Saint, and Dallas turns in solid performances in both. While playing the same squinty-eyed wooden hombre as he did in most of his westerns, he's at least a bit more animated and seems to be enjoying himself. As two brothers in Jesse and Lester, Richard Harrison and Donal O' Brien have great chemistry together, and the film is a vapid but fun experience in my eyes. 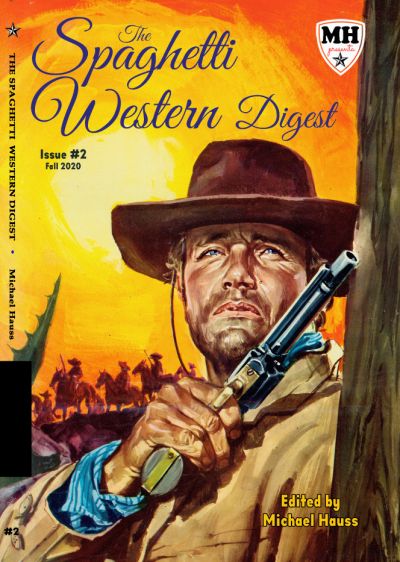 S: Aside from your own books, which literature do you regularly turn to?

M: The Italian Gothic films by Roberto Curti; Any Gun Can Play by Kevin Grant; Popular Italian Cinema edited by Flavua Brizio-Skov and Darkening the Italian Screens by Eugenio Ercolani.

S: What are your favorite title song in a spaghetti western?

M: My favorite theme song is “Ringo Came to Fight,” sung by Bobby Solo on the film One Hundred Thousand Dollars for Ringo.

S: If you had access to just one set of original negatives plus distribution rights, which long lost spaghetti western, would you release on BluRay right away, and why?

M: Death Played the Flute would be the first one on the list. It is a scummy, violent tale of revenge that is a fascinating watch. Second would be the Gordon Mitchell starring film from 1972 called A Gunman Called Dakota, that as far as I can tell was never dubbed in English!

S: What made you start writing about spaghetti westerns?

S: Tell us about the motivation and the genesis of your book projects and how they were received?

M: I have had almost all positive feedback! The first volume of Spaghetti Westerns! was problematic as I uploaded the wrong file and then had computer issues that made me pull the book back down in haste and re-release it. I am still not happy with volume #1 of Spaghetti Westerns, but it was great learning experience! Once the time frees up, I plan to revise it! The Spaghetti Western Digest has gotten nothing but praise, which makes me most happy for the contributors involved.

S: Did you ever meet any directors or actors in spaghetti westerns in real life?

M: I have not. But I have had the pleasure of exchanging emails and messages with such luminaries as Robert Woods, Ernesto Gastaldi, Sergio Martino, John P. Dulaney, Fred Williamson, Glenn Saxson, Tom Betts and others!

S: Where do you see influences of the spaghetti western in contemporary popular culture?

M: I think that I started noticing it in the 1980s with the action films whose heroes were molded after the anti-heroes in Italian westerns. Of course, the music has reverberated through the years. And Quentin Tarantino has borrowed much from the films!

S: Aside from the spaghetti western, what are some of your other favorite genres and cinematic periods?

M: Growing up in the late 60s and 70s in the United States, one was forced to have a varied taste in films because there was only a fistful of broadcast channels. Therefore, I would watch almost anything that popped up on that media in the way of a feature film. I remember I was obsessed with Errol Flynn growing up and had, at one time, quite a collection of posters and press books. So, on any given weekend, you could find westerns, Kung Fu, horror, comedies, and many other genes; it was always a crap-shoot. As I became a teenager, I frequented the Drive-ins, mainly to catch horror films, like The Texas Chainsaw Massacre, The Hills Have Eyes, and numerous others. In the 80s, with the availability of home video, I ran the gamut all the way from westerns to horror films to sex comedies. In the early 90s, my taste in cinema was cemented, and my go-to films were Spanish, Italian, Hong Kong, and Japanese. Not that I did not still watch movies from outside those countries, it is just that my preference laid within those mentioned above.

S: What are your thoughts on early, pre-Leone spaghetti westerns, and even more so, the Spanish and German westerns that kind of paved the way for the genre?

M: One problem I have is that Sergio Leone was such a looming presence over the genre that many films and their directors were quickly dismissed and then forgotten, which is a shame. I mean, as odd as this may sound, I honestly believe that in 1964, the best European western is a toss-up in my book. I believe that Joaquin Luis Marchent’s Seven Guns from Texas is just as good as Sergio Leone’s A Fistful of Dollars. I am talking about the version of Seven Guns from Texas with the death at the ending intact. It is quite frankly a masterpiece that is overlooked because of the Leone shadow. Technically, the film is a more traditional western with a twist of Spanish melodrama mixed in; that melodrama allows the viewer to become invested emotionally in the film. A Fistful of Dollars is iconic and one of the greatest Spaghetti westerns, and the film that jump-started the sputtering genre. I am also a fan of the early comedy films in the genre as opposed to the later comedies, which I dislike for the most part. I find in the German westerns exciting, thrilling spectacles, and when I need a break from the pessimism of the Italian oaters, I give a Winnetou or one of its brethren film a spin. 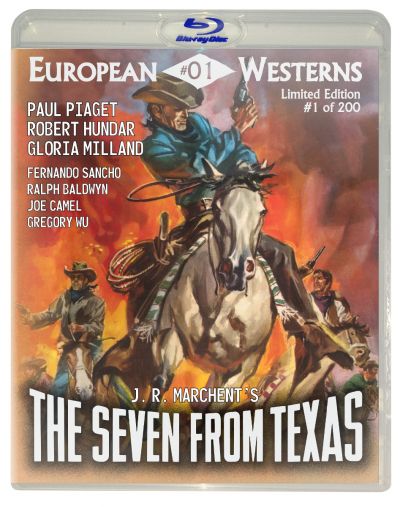 S: Do you watch spaghetti westerns dubbed in English, or do you choose the Italian dubs with subtitles? What would you advise newcomers to do?

M: I prefer watching in Italian with English subs. The reasoning behind that is because when I write about a film it is easier to make notes following the subtitles. That said, I grew up watching a steady stream of dubbed Kung Fu and foreign films and have no problem with dubbed films.

S: Do you collect spaghetti western soundtracks? Are there specific releases you can recommend, on vinyl or CD for example?

M: I was never much of a vinyl collector, but I do have all the Morricone' Dollar films soundtracks and various others. I have quite an extensive CD collection of Spaghetti soundtracks. Rather than recommend some of the more common CD releases, here are a few under the radar releases that I found are excellent examples: Cinevox Records release of the soundtrack for Shango, Music composed, orchestrated, and conducted by Gianfranco Di Stefano. Another gem in my book is the GDM CD release of the music from the film One More to Hell by Nico Fidenco. And I cannot say enough good things about the Beat Records CD releases of Italian film soundtracks!

S: As a writer and editor, what is your primary goal - to inform, to facilitate debate, or to (maybe even in academic terms) explore and analyze?

M: I never wish to facilitate a debate. I only want to explore and analyze. I desire to spread the Spaghetti gospel and gather the facts and share them with my readers. In The Spaghetti Western Digest, I have assembled a great group of writers who are knowledgeable about Spaghetti Westerns and have a passion for the genre. I have found that I enjoy the research process much more than the actual writing. I am in regular correspondence with the Spaghetti Western expert Tom Betts, and we share information regularly. We have been working on searching out individual films to see if they have played in the United States either at the theater or on television. Surprisingly, many early Spaghetti westerns (even some hard to find ones) have played on either or even both mediums. We have also extended our searches to include Canada, where many obscure films played on either television or at the theater.

Many thanks to Mike for agreeing to the interview, which was conducted by Sebastian. The SWDb recommends Mike's books (and earns a commission if you use our Amazon links to order them). Thanks to all our readers for the support. Please do share this article widely.

Retrieved from "https://www.spaghetti-western.net/index.php?title=An_interview_with_author_Michael_Hauss&oldid=122528"
Category:
Cookies help us deliver our services. By using our services, you agree to our use of cookies.