And his Name was Holy Ghost Review 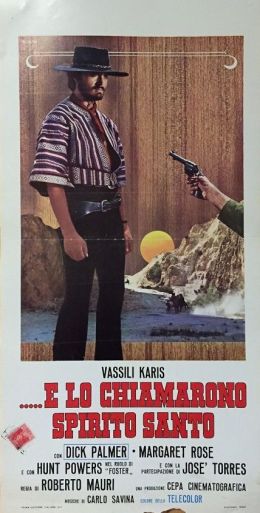 The first and arguably best of the three Spirito Santo movies directed by Roberto Mauri, starring Greek actor Vassili Karis as Spirito Santo (Holy Ghost). The movies are unrelated to the better known Uomo avvisato mezzo ammazzato... Parola di Spirito Santo, directed by Giuliano Carnimeo and starring Gianni Garko. According to Karis, producer Vitolo was a clerk working within the business who therefore knew a lot of people, but had otherwise no experience in film making. He had a handful of lires to create a production company ... and the rest was up to the director and the actors. According to Karis it was he who did the casting (*1). If so, he did a good job: with Mimmo Palmara, Hunt Powers and José Torres the movie has enough familiar faces to give fans of the genre a safe feeling.

Karis' character was called Spirito Santo because a white dove - a sign of the Holy Ghost - appeared on the window sill when he was delivered. The first time we see him as an adult, he's a prisoner in a labor camp. He's picked up by an Indian sheriff (Palmara), who's supposed to escort him to Tucson, where he will be brought to trial. But the escort is ambushed by the men of a corrupt landowner (Powers) who wants to rob a money transport and needs Spirito Santo's assistance to carry out his plans. All members of the escort are killed, with the exception of the Indian sheriff, who keeps trailing Spirito Santo because he has a personal score to settle with him. All things go according to plan, but then the landowner's daughter, Consuelo, falls in love with Spirito Santo, and the aristocrat doesn't want his daughter to marry a scoundrel ...

Made on a shoestring, the movie has some of the look and feel of the low budget productions filmed in Israel, like Black Jack or Diamante Lobo. Mimmo Palmara playing an Indian may even deepen this impression. But it was entirely shot on Italian soil, for most part in the Manziana region, northwest of Rome, with a couple of additional scenes shot at familiar locations such as Villa Mussolini and the Monte Gelato Waterfalls. The script consists of no more than a series of snippets of what might have been coherent storylines; of these snippets, the revenge element works best. An early flashback tells us that the Indian sheriff thinks Spirito Santo killed his sister, and only in the moments dying moments, we learn what really happened on that fatal day. For a film that was made with such a small budget - or with no budget at all - the first Spirito Santo is remarkably enjoyable. It looks as cheap as it is, but Palmara is once again a terror-inspiring Indian and Karis is an amiable, poncho-wearing anti-hero, a bit different from the flock (even that poncho is different, it's not a poncho actually). Margaret Rose Keil was a so-called postcard girl who became a starlet in European B-movies; most sources claim she's German, but otherwise not too much is known about her. Powers is almost unrecognizable, sporting one of the most impressive whiskers is film history. José Torres adds a maniacal type to his repertoire as the machine gun-toting priest who kills everybody with a smile on his face. The movie also offers some of the most bizarre snouts in the history of film making in supporting roles. 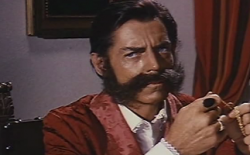 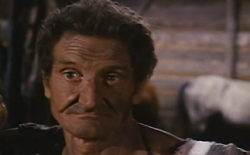 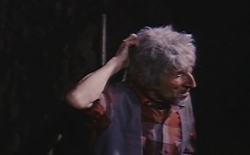 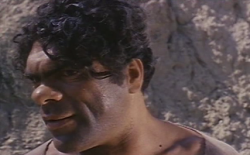 Simon Gelten is a long time contributor to the SWDb. "I'm not as old as Tom B. but I'm working on it. I hope to catch up with him by the end of the next decade.", he says. Simon saw all movies by Sergio Leone and several by Sergio Corbucci in cinema, most of the time in Eindhoven, the city where he was born. Currently, Simon is living in Turnhout, Belgium. Simon is active within the database as both Scherpschutter and his alter ego Tiratore Scelto.
Retrieved from "https://www.spaghetti-western.net/index.php?title=And_his_Name_was_Holy_Ghost_Review&oldid=127237"
Categories:
Cookies help us deliver our services. By using our services, you agree to our use of cookies.