And the Crows will dig your Grave Review 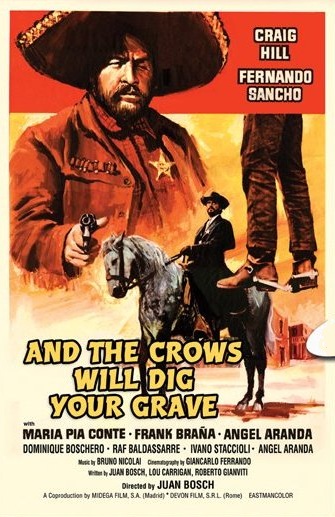 A little known paella/spaghetti western, made relatively late into the history of the genre. It tells a story of a cat-and-mouse game, with the cat repeatedly being outsmarted by the mouse. Apparently it's an adaptation of a western novella by Enrique Vera, a Spanish author of dime novels (who also contributed to the script), but it's also a thinly disguised imitation of one of the most distinguished genre outings, Sergio Sollima's The Big Gundown.

In the aftermath of the Civil War many men have turned to banditry. Wells Fargo is forced to hire bounty hunters to protect their business, but these professionals aren't much better than the robbers they're hunting down. One of them, Jeff Sullivan, buys the freedom of a convicted robber, Dan Barker, in the hope that the man will lead him to the bandit masterminding the robberies, a guy called Kovacs. In the course of the events the two men learn to respect each other and when they eventually arrive at the bandits' hideout, they will both have to make an important decision ...

In spite of the year of production this is not a comedy. And the crows ... is actually quite sadistic, with a couple of brutal torture scenes. At the same time it's rather short on typical spaghetti western action. The story is built around a chase and the movie's true villain only appears in the final twenty minutes. The final shootout is furious but it's also rather fast and there are no ritual duels in the style of Leone. Cast and crew are almost entirely Spanish and Giusti presumes the Italians only made a financial contribution (*1), but the credits tell us that some indoor scenes were shot at the Elios studios. The film has a bit of an old-fashioned look and feel, as if it belongs to the previous decade and somehow wandered off into the Seventies. 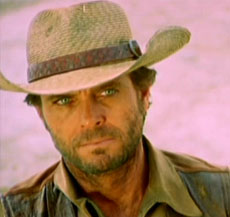 This is not a great movie, but for a low-budget affair it's not bad. The background story of a post-war society in disarray lacks depth, but there's some character development and the motivations of the various people involved are revealed progressively throughout the movie; only relatively late we find out why this Sullivan is so desperate to track down Kovacs. Hill and Aranda are no Van Cleef and Milian, but they're doing a good job here. For once Sancho is active on the right side of the law, but it doesn't make much difference, he's as ebullient and unreliable as ever.

English title: And the Crows will dig your Grave

The film is not to well-known, but several genre fans have praised its wonderful title. There's some confusion about the birds mentioned in it. The Italian corvo may refer to both crows and ravens: in fact they belong to the same genus, corvus, and the large-bodied raven, a carrion bird, does not form a single taxonomic group within the genus (*2). Il corvo, crow, is often referred to as a bringer of bad luck or a messenger of death in Italian. This does not originate in the Bible or Norse mythology, as some have suggested, but goes back to Edgar Allen Poe's poem The Raven, translated as Il Corvo in Italian (*3). The Spanish title mentions another bird altogether: buitres are vultures (but like raven they are carrion birds) (*4)

Simon Gelten is a long time contributor to the SWDb. "I'm not as old as Tom B. but I'm working on it. I hope to catch up with him by the end of the next decade.", he says. Simon saw all movies by Sergio Leone and several by Sergio Corbucci in cinema, most of the time in Eindhoven, the city where he was born. Currently, Simon is living in Turnhout, Belgium. Simon is active within the database as both Scherpschutter and his alter ego Tiratore Scelto.
Retrieved from "https://www.spaghetti-western.net/index.php?title=And_the_Crows_will_dig_your_Grave_Review&oldid=131535"
Category:
Cookies help us deliver our services. By using our services, you agree to our use of cookies.