This movie (See database Page) has a truly wonderful opening scene: Three men, looking like Clint Eastwood, Lee Van Cleef and Franco Nero ride into town. They're evil gunmen - they're actually so evil that people quickly close their doors and windows. But someone is waiting for them, a bounty hunter dressed in black, called The Stranger. Three coffins are brought out of town by a gravedigger and suddenly the evil gunmen notice that the coffins are destined for them. The next moment ... well, see for yourself

The bounty hunter (Hilton) is looking for a Mexican bandit called Monetero (Roland), but accidentally witnesses a train robbery, masterminded by the bandit himself. He then starts having second thoughts about killing Monetero, because the bandit may lead him to the stash of gold that was stolen during the robbery. After saving Monetero from the gallows, the two men team up and are joined by a third person, a treacherous bank employee (Byrnes) who is in possession of a part of the medallion that reveals the whereabouts of the treasure ...

With three men vying for a hidden treasure and different parts of information - when pieced together - leading to the hiding place, the film is one of the many Italian westerns to rip off the famous premise of The Good, the Bad and the Ugly (*1), and also one of the best. It actually freely borrows from several illustrious predecessors, but it's all done with a wink of the eye and without any possible disrespect. The wonderful opening scene is one of the best in-jokes of the entire genre. In spite of this spoofy opening and some tongue-in-cheek humour, the first half of the movie is still pretty violent, with a bloody assault on the train and some cynical behaviour of the bandits. It's only halfway through that the movie takes its comical turn with a hilarious fistfight between Byrnes and Hilton (in his underwear!). 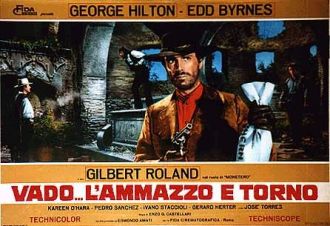 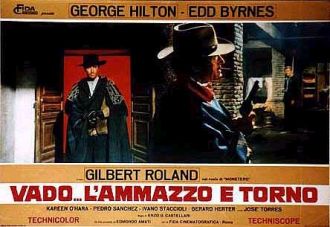 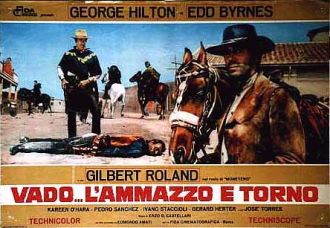 Things occasionally slide off into silliness and director Castellari has a tendency to over-elaborate the action sequences. A good example is a chase scene on a market place that begins well with some heavy punches launched, but ends up with Byrnes using trampolines to escape from his persecutors. But Castellari also keeps up the pace - there's hardly a dull moment - and his movie remains enjoyable due to some great visual moments and excellent performances by the three leads. The part of the ever-smiling, nearly immoral adventurer/bounty hunter fits Hilton like a glove and would provide him with a model for most of his later westerns. Roland turns in a fine, laconic performance as the sophisticated Mexican bandit and television actor Byrnes is a pleasant surprise as the white collar criminal with a fifties forelock. The original story was written by Romolo Guerrieri (Enzo G. Castellari’s uncle) but Enzo and his co-author Tito Carpi spiced the screenplay with a strong dose of irony and some slapstick. According to Enzo this movie marks the beginning of the comedy spaghetti – long before Barboni invented the Trinity formula (*2). It wasn’t really the first comedy western made in Italy, but he might still have a point: the slapstick elements are new and it seems likely that Enzo Barboni and the duo Hill & Spencer had this movie in mind when developing the Trinity formula. 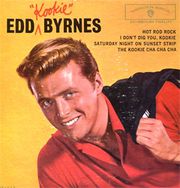 Simon Gelten is a long time contributor to the SWDb. "I'm not as old as Tom B. but I'm working on it. I hope to catch up with him by the end of the next decade.", he says. Simon saw all movies by Sergio Leone and several by Sergio Corbucci in cinema, most of the time in Eindhoven, the city where he was born. Currently, Simon is living in Turnhout, Belgium. Simon is active within the database as both Scherpschutter and his alter ego Tiratore Scelto.
Retrieved from "https://www.spaghetti-western.net/index.php?title=Any_Gun_Can_Play_Review&oldid=114907"
Categories: