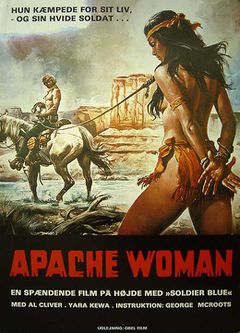 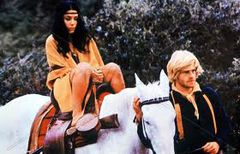 This is Soldier Blue all’italiana, with some isolated plot elements taken from Ulzana’s Raid and Cry for me, Billy. A group of Apaches - mainly women and children - have escaped from the reservation (note that they took their teepees with them!), but the army is on their trail and most of them are killed in a surprise attack. One Indian woman survives the massacre and is found by a young recruit, who fell from his horse and therefore was unconscious during the events. Now the two must try to make it back to Fort Cobb, where the young man is garrisoned.

Made during the twilight years of the genre, the movie mixes the violent antics of the Indian westerns that were made in Italy in the early seventies with the melancholic tendencies of the twilight spaghettis. It also adds a strong dose of leering sex and nudity to the dish. The actress playing the Apache Woman walks around semi-nude most of the time and we get all kind of flashes, including a (hairy) pussy flash. However, the sado-masochistic scene depicted on the well-known movie poster, of a woman walking behind a horse, hands tied behind her back, her body only covered with a ragged piece of cloth, is not in the movie. Between the salacious goings-on (there are even a few rape attempts), the movie tries hard to create a gloomy atmosphere and to make some statements on the human condition. The West depicted in this movie, is a world of cruelty and moral decay in which no-one can be trusted. On their way back to civilization, the two meet all kinds of human monsters, but in true Italian style the most dangerous encounter of them all, is that with a family of religious fanatics.

It’s not good, it’s merely half decent, but at least it’s not hopeless. The first half of the movie is pretty embarrassing, but somehow director Mariuzzo gets the narrative on track and the last half hour or so, even offers some excitement (and a decent amount of carnage). The twists and turns of the screenplay are rather simple, but effective. The production was seriously affected by its ultra-low budget and often looks as if it was shot by amateurs, on a few consecutive Sunday afternoons, in a woody area just outside town. It was actually shot near Viareggio (Tuscany) and on the premises of the Tirrenia Studios, located between Pisa and Livorno (1).

The Italian title means A Woman called Apache, and the character played by actress Yara Kewa is indeed called Apache by the young man (who takes pity on her and eventually falls in love with her), because he can’t pronounce her real name, Sunsirahè. Kewa is most probably a pseudonym and according to IMDB (as well as most other sources) her real name was Clara Hopf. As an actress she’s only listed for one other movie, a comedy western with some mild eroticism, Partirono preti, tornarono... curati (2). Director Mariuzzo, who calls himself George McRoots (!) for the occasion, made only two other movies, plus a documentary called Mondo Porno Oggi. These things may explain the rather amateurish look and sexual content. We do see some familiar faces in supporting roles. Corrado Olmi plays an arms dealer modeled after Donald Pleasence in Soldier Blue, and Rick Boyd is a good, nasty villain, one of those who think rape and humiliation are funny.

Simon Gelten is a long time contributor to the SWDb. "I'm not as old as Tom B. but I'm working on it. I hope to catch up with him by the end of the next decade.", he says. Simon saw all movies by Sergio Leone and several by Sergio Corbucci in cinema, most of the time in Eindhoven, the city where he was born. Currently, Simon is living in Turnhout, Belgium. Simon is active within the database as both Scherpschutter and his alter ego Tiratore Scelto.
Retrieved from "https://www.spaghetti-western.net/index.php?title=Apache_Woman_Review&oldid=101326"
Category:
Cookies help us deliver our services. By using our services, you agree to our use of cookies.