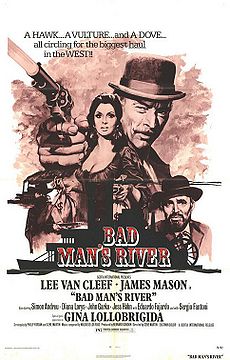 In the early seventies all had become fun in spaghetti western wonderland. Or at least it was meant to be fun. In Bad Man’s River, made in 1971, Lee van Cleef wears a toupet and a bowler hat, Gianni Garko rides a bike and wears goggles, and James Mason makes his debut in a European western as a Mexican revolutionary. And they’re all duped by a sex symbol who clearly was over her two major peaks.

Lee is conned by Gina Lollobrigida into marrying her: instead of sharing the bed with him, she has him tied to a chair to steal his money. But, as said, Bad Man’s River is a film about the stupidity of men in the face of an attractive woman (the bizarre Italian title, E continuavano a fregarsi il milione di dollari, means something like: And they kept gambling away those one million dollars). So when Lee and his men are asked by La Lollo to blow up a Mexican mission turned into an arsenal by government troupes, they accept the job, only to be duped again. And again, and again, and again.

Bad Man’s River is not the worst spaghetti (or paella) western you’ll ever see, but what hurts is that it could’ve easily been so much better. Thanks to Hollywood veteran Philip Yordan the script is lively and eventful (if a bit sinuous), and with a cast like this, even an ordinary director should have been able to create at least a decent western. But Martin is no ordinary director: I never understood how a man who was responsible for the excellent The Bounty Killer, could also be responsible for Pancho Villa, a true disaster of a movie. Pancho Villa is not just bad, or disastrous, it is horrendous, atrocious. It seems Bad Man’s River shows both sides of señor Martin’s capacities: although it’s nowhere nearly as good as The Bounty Killer, the picaresque first half has enough action, flamboyant acting and broad humour to keep most viewers entertained. Had Martin maintained the tone and pace of this first half, his movie would’ve been a fairly enjoyable genre outing, half serious, half tongue-in-cheek, never really engaging, but overall diverting. But once Lee and his men get involved in some revolutionary activities (thanks to Lollobrigida, of course), things become obnoxious, and I mean really obnoxious. The jokes are silly and very quickly all momentum is gone. In order to provoke a laugh, good old Aldo Sanbrell is saddled with lines like: “I know this man like my brother. But who the hell is he?” Why oh why, señor Martin?

Van Cleef’s performance is strictly routine and most other actors struggle with a script that gives them hardly any chance. At the age of 44, Lollobrigida (La Lollo to Italians and friends) was definitely past her prime but still seductive; actually she’s quite enjoyable as the deceitful temptress who twists all men around her little finger. The score, by Waldo the los Rios, easy listening sparked with some up-beat dance hall tunes, is unusual to say the least, but I thought it worked quite well in this context. But for no particular reason there’s a poorly performed rock song thrown in somewhere halfway the movie. Maybe this is where they got the idea to ask John Bon Jovi for his score for Young Guns II. As always, Alejandro Ulloa’s cinematography is great and some of the settings are attractive, notably the river boat.

Simon Gelten is a long time contributor to the SWDb. "I'm not as old as Tom B. but I'm working on it. I hope to catch up with him by the end of the next decade.", he says. Simon saw all movies by Sergio Leone and several by Sergio Corbucci in cinema, most of the time in Eindhoven, the city where he was born. Currently, Simon is living in Turnhout, Belgium. Simon is active within the database as both Scherpschutter and his alter ego Tiratore Scelto.
Retrieved from "https://www.spaghetti-western.net/index.php?title=Bad_Man%27s_River_Review&oldid=101162"
Categories: