The film (See Database Page) is best known as the twin movie of Sergio Leone’s A Fistful of Dollars. It was produced by the same pair of producers (Colombo & Papi) for their production company Jolly Films. It’s even thought that Leone’s movie was financed with the left-overs of this movie, but this was denied by director Mario Caiano, who sustained that the two movies were separate projects, each with their own budget.

What kind of movie is this next of kin of Sergio Leone’s landmark movie? Well, it’s a very traditional western, occasionally looking closer to the German Karl May adaptations than to the Hollywood westerns it obviously tries to emulate. Rod Cameron is Pat Garrett, the sheriff of a small border town, whose wedding day is ruined by a bank robbery, performed by two brothers, Billy and George Clayton. He easily tracks them down, but they have crossed the border and to avoid problems with the local authorities, Garret will have to cross the desert to bring the two brothers to justice (and the loot back to town). The venture is further complicated by local bandits who have smelled money …

Le Pistole non discutono can’t hold a candle to anything Leone has ever done, but that doesn’t mean it’s a bad movie. Some scenes – like Garrett hoisting up his prisoners to mislead the Mexican police – are a bit ridiculous, but Caiano shows some visual flair and the trek through the desert is particularly well done. Cameron looks a bit old and tired and Aranda is overdoing things as the younger of the two brothers, who is shocked by what happened, but Horst Frank is a delight as the evil Billy Clayton, who uses all his malice and wit to persuade Pat Garrett to give up his mission. Unfortunately his character killed too soon, most probably to give Aranda a chance to redeem himself in an unconvincing finale.

If you want more detailed comments on this movie, see Phil H's review: HERE. In the meantime, I want to concentrate on a question that imposes itself in relation to this movie: 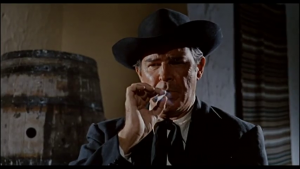 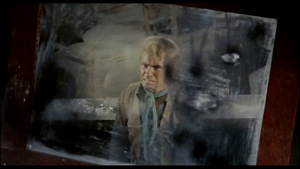 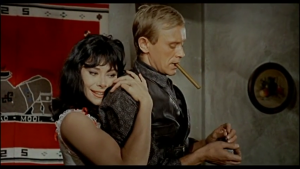 A Dollar and a Pistol: How close were they related?

What about these persistent rumours that the two films were arranged together (or one as a result of the other), so one could ride off the costs of the other? The statement appears in most reference Works. Gianfranco Casadio writes:

It’s a decent film, no more, that wasn’t successful, but one with a curious history. The left-overs of this film’s budget are given to Sergio Leone to direct PER UN PUGNO DI DOLLARI, which would have an enormous success and gives the producers, so to speak, a bonus to cover the money they lost on Caiano’s movie. (*1)

The story pops up again on the Italian spaghetti western database:

The film is important from a historical point of view because it was meant to be a challenge to the American western, but instead “Jolly Film” decided to use the financial left-overs for this film for the production of a second one, mainly for accountancy reasons: PER UN PUGNO DI DOLLARI (…) (*2)

These things are confirmed by Marco Giusti, who also states that both movies shared various locations and crew members (and a score by Morricone), and that several people, among them Sergio Leone and Mimmo Palmara, were involved in the preparations of the two movies. It was in fact Leone who recommended Rod Cameron to Caiano, while Palmara was offered a role in both movies, but chose to appear in Caiano’s movie because it had the bigger budget and Caiano also seemed more keen on engaging him (*3). Christopher Frayling claims that both movies were backed by the same three production companies. This is not true: Fistfull and Pistols shared the same Italian and German production companies (Jolly Films and Constanstin Movies), but while Fistfull was co-produced by Ocean Film, Pistols was co-produced by Trio Film (*4).

Once the two productions were conceived, the movies were realized separately, so it seems. Several people involved in the making of the movies have confirmed that the two directors did not meet a single time during the filming of their respective movies (*5).

Simon Gelten is a long time contributor to the SWDb. "I'm not as old as Tom B. but I'm working on it. I hope to catch up with him by the end of the next decade.", he says. Simon saw all movies by Sergio Leone and several by Sergio Corbucci in cinema, most of the time in Eindhoven, the city where he was born. Currently, Simon is living in Turnhout, Belgium. Simon is active within the database as both Scherpschutter and his alter ego Tiratore Scelto.
Retrieved from "https://www.spaghetti-western.net/index.php?title=Bullets_Don%27t_Argue_Film_Review&oldid=114927"
Category:
Cookies help us deliver our services. By using our services, you agree to our use of cookies.