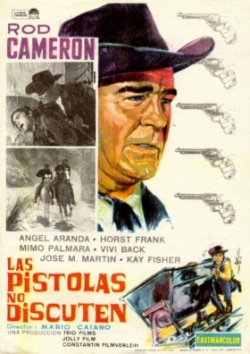 If you ever need an example of how much influence Sergio Leone had on the italian western a viewing of Bullets Don't Argue will tell you all you need to know. It's a competantly enough directed oater with a decent Morricone score and good central performances by all concerned, filmed in the same Almerian locations and at around the same time as A Fistful of Dollars. Leone was even involved in the pre production work. But this film is as different an animal to Leone's first western as a Bengal Tiger is to a badger. Why? Well, let me count the ways.

To begin with the lead character in Caiano's film is an old school western hero of 1940s B movie proportions. In fact Rod Cameron, the star of the picture, was a B movie actor of the 1940s and, as such, couldn't have cut a more different figure to Clint Eastwood in 1964 if he had painted himself blue. In his mid fifties and thick set, Cameron appears more like a kindly uncle than anything else and although he is clearly at home on a horse and carries out his fight scenes with a confidence born of long experience he never really inspires excitement at any point. If Eastwood's cheroot smoking Joe epitomised a new era of cool, Cameron remained the vanguard of the luke warm.

As you would expect with such an old school central character the story line of Bullets Don't Argue follows a similarly traditional line. Sheriff Pat Garrett (Cameron) pursues two bank robbing bandits across the border into Mexico intent on bringing them back to face justice for the killing of the two staff members unlucky enough to have recognised them during the raid. Identified as local brothers Billy and George Clayton (Angel Aranda and Horst Frank) the bandits are easy to locate but prove harder for Garrett to transport back, especially once the existence of the $30,000 swag comes to the attention of mexican gang leader Santero (Mimmo Palmara) and he and his men pursue the lawman and his prisoners across the desert. After a few twists and turns Garrett finally is forced to hold up at the ranch of a friendly young woman and the younger bandit brother gets the opportunity to redeem himself in the face of Santero's superior numbered forces. No signs of any pragmatic morals here. Garrett is a straight shooting upholder of truth, justice and the american way while key bad guys Santero and Billy Clayton are rotten to the core. 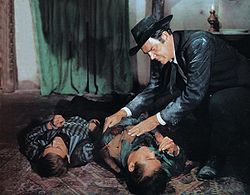 If this wasn't enough, the friendly young woman ranch owner (Vivi Bach) has a syrupy nice little brother called Mike who wouldn't be out of place in an episode of Leave it to Beaver and who gets rescued from the flaming ranch house by our hero when the rest of us are all baying for him to be left in there to burn!

No, make no mistake, this film is based so heavily on the traditional style U.S western that it even appears out of date compared to american oaters of the pre spaghetti period. And Caiano admits this openly himself. He set out to make a traditional western and used plot threads and ideas from a host of famous U.S westerns of the 1950s as he went along. The examples of this poaching are seemingly endless, from the Sheriff's ruined wedding day (High Noon) to his transportation of the bandit to justice (3.10 to Yuma). It even has the Cavalry charging in to save the day for Pete's sake and you won't see that too often in an italian western. 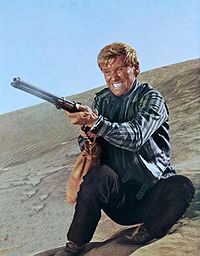 And it is this open mimicing of it's american counterparts that really sets this film apart from the eurowesterns that followed the success of Leone's films. Caiano is not trying to set any new styles here. He is openly attempting to make a western, in europe, that looks as much like an american film as possible. And, in that, he was pretty successful. I was brought up on american westerns just like this and I still love them. Bullets Don't Argue, in that context, is a success and it's 'saturday morning pictures' qualities afford it a certain nostalgic warmth. Indeed, this film could have been shown at the Leyton Odeon (my childhood local cinema) on any given saturday morning in the 1960s and been received with foot stamping enthusiasm by an army of scruffy, lolly stick throwing urchins just like me whose prefered cinematic diet was satisfied by just this kind of straightforward horse and gun fest. It is fun and formulaic. What it isn't is innovative. It is a film which looks squarely into the past and that is why its comparison with Leone's effort of the same year is so stark.

But for all its differences (and they really can't be overstated) Bullets Don't Argue still shows hints of a european style about to emerge. It is almost as if, despite all its best efforts to mask its european origins, they just can't help peeking through. Part of this is almost certainly due to the Almerian landscape and locations. Rod Cameron may be a middle aged vanguard of virtue with an expanded waistline but he still walks down the same streets in Los Albaricoques that Eastwood and Van Cleef would immortalise soon after. There is also the contributions of Carlo Simi (set design) and Morricone (musical score) which add more resonances of spaghettis to come and, lastly, there are one or two faces in the cast who would go on to become familiar favourites and stalwarts of the italian style westerns. First among these, undoubtedly, is Horst Frank. Although younger, thinner and with shorter hair than when he became more familiar to us in later films his icy stare and calous wickedness is proudly on show here and his performance as Billy, the terminally mean Clayton brother, is the strongest in the film. He swaggers around killing, slapping and stealing without a moment's hesitation and his glowering presence adds a real edge to this otherwise wholesome canvas. The only disappointment is that we are denied the pleasure of a final showdown between him and the hero. A real missed opportunity in my view but probably symptomatic of the film's more mainstream goals.

Fundamentally then, Bullets Don't Argue was proof that the italians could make an american western with acceptable skill and genre understanding if they chose to. This film ticks a whole lot of general boxes and is entertaining in its traditional style. Thankfully, however, this style was not to be the dominant influence on eurowesterns in the coming years. It would be the more innovative style of Leone and its more morally ambiguous characters that became the dominant and defining image of the western all'italiana. And we can all be grateful for that.