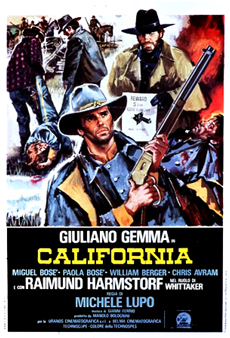 At the end of the Civil War, a discharged Confederate soldier travels with a fellow solider to Missouri where his young companion is shot and hung for horse stealing. California decides to take the dead companion's belongings to his family's ranch, where he falls in love with his friend's sister. But then the "ghosts" of the war return in an unexpected way haunting him again.

Tired and incoherent attempt to make a serious SW when the genre was already dead. The first half is set in a struggling post war scenario, with not much interesting to say or show. It leads into a short romantic bridging section, just before the film turns into more familiar SW stuff with the revenge story of the second half. The film mostly ends the story elements too hastily, just before they can become interesting or really dramatic, and suffers from a cliched way of lighting (which still has its atmospheric moments) and an inappropriate soundtrack. But it should be mentioned that California is liked by many of the SW community.

Retrieved from "https://www.spaghetti-western.net/index.php?title=California&oldid=134205"
Categories:
Cookies help us deliver our services. By using our services, you agree to our use of cookies.