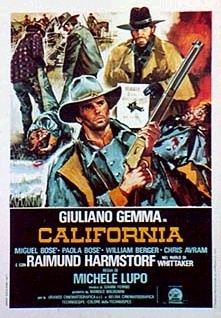 1977 didn't see the last of the Spaghetti Western but it was close enough. By this time production of westerns in Europe had slowed beyond a trickle to an occasional drip. The cycle had just about played itself out and its popularity in Italy had been overtaken by the crime and horror film in just the same way as it had in the rest of the world. Yet, in the face of this numerical decline, the quality of the product which did actually get made during this twilight period of the genre could be surprisingly good. Not all of it of course. There was some appalling rubbish churned out too (Kid Vengeance springs to mind). But considering the small number of westerns produced during these final few years the percentage of above average fare is quite an impressive one. Films such as Keoma, Mannaja and Four of the Apocalypse may not be from the very upper tier of the genre but they are certainly creditable affairs which gave proof there was still life in the old dog yet. California falls heavily into this category.

Set as the war between the states has just finished, California follows the story of a recently demobbed Confederate soldier, Michael Random, (not the character's real name but an alias he adopts from a popular tobacco brand) as he seeks a new start amongst the harsh realities of the post war nation. Bounty killers and veangeful, grieving families populate the roads, creating a perilous 'gauntlet' for the returning soldiers to run and after his young companion is killed, Random decides to head for the sanctuary of the boy's farm and family. All does not remain calm of course and when the bounty killers show up again Random's new sweetheart is taken hostage. Strapping on his guns again, the ex soldier is forced to embark on a new and more personal war as he seeks out the men who have taken his girl and attempt to bring her home safely.

The better of these twilight westerns were decidedly darker in tone and this film is no exception; undoubtedly Giuliano Gemma's most downbeat outing in the genre. In fact, for me, California has an almost post apocalyptic feel about it. From the opening scene we are consumed with mud, rain and misery. Random (Gemma) arrives at one ghost town after another, their decaying facades and caved in roofs signifying perhaps not only the desolation of a nation ripped apart by civil conflict but also the terminal condition of the western genre in Europe. The sets are so miserably dilapidated it is difficult to know if they were skillfully constructed that way for the purpose or just genuinely old and worn out, their useful days as western towns a melancholy memory. Whichever the truth, they are put to excellent use here, creating just the right backdrop of desolation and dispair for the story which unfolds around them. One of the towns even comes complete with craters in the street fresh from artillery bombardment which are readily put to use by our protagonist as pseudo open graves for two of his prey while a building on the verge of collapse is helped along with a well aimed bullet and becomes the direct cause of death for poor old Robert Hundar; a man who was killed in a number of ways during his long spell as resident bad guy in this genre but who I suspect was never knocked off by failing architecture before.

But the misery extends beyond the abandoned towns. At the farm where Random settles with his dead friend's family the sense of desolation is just as strong. In fact the whole film is shot in subdued light and colours to such an extent that even the lighter hearted scenes have a melacholy air. This is particularly noticeable during the scenes shot in Almeria; a landscape we are used to seeing in blinding sunlight and rich colours. All in all, not a mood you neccesarily expect from a Giuliano Gemma picture. Indeed, even the character Gemma plays, despite his kitten saving, girl rescuing heroics is decidely dirtier than is the norm for 'Bello Giuliano'. And I don't just mean the muddy uniform he wears. Gemma's fight scenes were always action packed and well choreographed. His background as an acrobat and stuntman meant that his natural athleticism and training made his physical abilities a strong asset which was usually taken advantage of. What is slightly different here is that we not only see his character fighting with energy and style but also with an unusually nasty edge. We don't just see punches and grappling but kicks and head butts. And I don't mean bullish, Bud Spencer type head butts driven at the stomach but, well aimed 'Glasgow Kiss' type head butts planted squarely into the face. One of his brawls (I won't say against whom in order to avoid a spoiler) also ends with a particularly vicious use of a lump of four by two with a nail in it. Not so much the pretty boy hero of the Ringo films or Adios Gringo here, but a far more jaded and ruthless character willing and able to get down and dirty.

Having said all that, the film eventually develops as time passes into a more traditional revenge themed tale and despite this angle being handled quite well it gives the impression of a certain disjointedness to the piece as a whole. Almost split into three separate phases the story starts as a tale of returning soldiers battling against forces of anarchy in a post war nightmare world, shifts to a love story as Gemma settles in to life on the farm with his friend's sister, and ends as a revenge and rescue flick as he sets out to save the girl and kill the bad guys. This variation in direction has put some fans off as an inconsistancy but I believe the changes follow more of a pattern than is perhaps obvious at face value. The middle section of the film which develops the love interest is setting up not just the rescue element but the idea of new hope. It is saying that perhaps life can be good and clean again and that it may still be possible to escape the war without too many scars. It offers the characters the promise of an unstained future. The events that follow, even the seemingly successful denouement, suggests that this hope is unrealistic. That even the 'victors' will have to carry their scars and live in a future that will always be tarnished to a large extent.

The cast here is very solid. Gemma carries the film largely of course and his previous work with Lupo in Arizona Colt and Ben and Charlie obviously allowed for a good understanding between actor and director. But main villain Raimund Harmstorf also plays his part well and brings some wide grinning nastiness to the role as long as a skillfully conveyed sense of tragedy in his characterisation of the bounty killer, Whitaker. Harmstorf is ably assisted in the bad guy department by the ever reliable Robert Hundar too and it was nice to see William Berger, although his role as the broken father grieving after his lost son keeps him fairly static throughout his part in the film. The young Prestons are competently covered by Paola and Miguel Bose and we even get a cameo from one of my favourite genre faces, Franco Ressel. There's a good, melancholy score from Gianni Ferrio too and although Alejandro Ulloa's cinematography is of the aforementioned subdued palette variety it fits the film well and is to his usual high standards.

The DVD release from NEW presents the film in a nice 16:9 ratio and offers English, German and Italian audio options. The quality of the transfer is up to their usual good standards although it is often only available at a somewhat hefty price. Mine was a lucky ebay purchase for which I am grateful as California is a very good example of the twilight spaghetti and a film well worth seeing for any fan of the genre.

Retrieved from "https://www.spaghetti-western.net/index.php?title=California_Film_Review&oldid=132812"
Category:
Cookies help us deliver our services. By using our services, you agree to our use of cookies.