Difference between revisions of "Cannon for Cordoba Review" 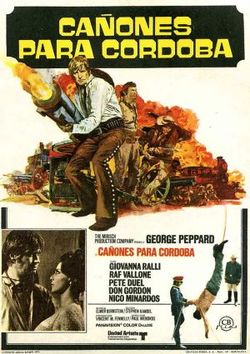 The film is set in 1912. Mexican revolutionary bandits are launching surprise raids on both sides of the border. When six cannons are stolen by the renegade general Cordoba, the American general Pershing (Russell) thinks it’s high time for some radical measures ‘to prevent that any of these cannons will ever be used against the American people’. Since the American Army is not allowed to cross the border with Mexico, an elite group, led by the tough, iconoclastic Captain Douglas (Peppard) is sent into the heart of Cordoba’s territory.

The first half hour of the movie, strongly influenced by The Wild Bunch (even if it changes that film's premise and refrains from its excessive bloodletting), is by far the best part of the movie. It’s atmospheric and rounded off with a well-staged, large scale massacre scene, but once we’re passed it, the mood changes and the film also slows down considerably. Despite the Mexican setting it seems closer to those WWII adventures like The Dirty Dozen or Operation Crossbow (also starring Peppard), about groups sent to hostile territory with a special assignment, usually the neutralization of a majestic weapon. The Mexican villains also sound a little like the Nazis in those movies, talking some kind of pseudo-American gibberish to each other (even when there are no Americans around) instead of their native tongue.

The problem is that our conception of Mexican revolutionaries (even when they have turned to banditry) is radically different from that of the Nazis, which makes the waters this movie is fishing in more than a bit murky. It's often labeled as a reactionary, counter-revolutionary movie which served the Nixon administration well in their fight against revolutionary movements and America's radical youth. One of the members briefly mentions there’s a people’s revolution going on in Mexico, and that he doesn’t want to disturb it, but nothing’s really done with the idea. There’s also a particularly nasty torture scene early on in the movie to convince us this general Cordoba is a monster, but it all feels a little awkward.

Still, if you’re are looking for a tough action movie, you could do a lot worse. The camerawork is a bit show-off, but the action scenes are well-handled. The international cast, headed by George Peppard (in very good form here) is very attractive. Televison actor Pete Duel (from Alias Smith and Jones) sports some impressive side-whiskers, Aldo Sanbrell and Giovanna Ralli (Columba from The Mercenary!) are representing the spaghetti western community, and it’s nice to see that by then Peppard had already developed the cigar chewing habit from The A Team. He doesn’t even loose his cigar when he’s smacked in the face. Old smokers never die.

Simon Gelten is a long time contributor to the SWDb. "I'm not as old as Tom B. but I'm working on it. I hope to catch up with him by the end of the next decade.", he says. Simon saw all movies by Sergio Leone and several by Sergio Corbucci in cinema, most of the time in Eindhoven, the city where he was born. Currently, Simon is living in Turnhout, Belgium. Simon is active within the database as both Scherpschutter and his alter ego Tiratore Scelto.
Retrieved from "https://www.spaghetti-western.net/index.php?title=Cannon_for_Cordoba_Review&oldid=110769"
Category: