Dan Vadis was an American actor famous for his lead roles in many Italian films made in the 1960s. He was born on Jan 3rd 1938 in Shanghai, China and passed way on June 11 1987 in Lancaster, California (USA). 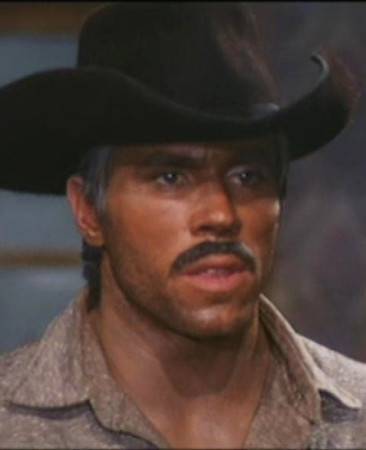 Dan Vadis was born Constantine Daniel Vafiadis in 1938 in Shanghai. China to Greek American parents. After a stint in the US Navy (given his year of birth, most likely serving in the Korean War), he got into bodybuilding.

At some point while competing, he became friends with fellow bodybuilder Gordon Mitchell who got both of them spots on Mae West’s Muscleman Revue stage shows. After Steve Reeves’ success in Le Fatiche di Ercole (Hercules), Vadis would accompany Mitchell to Italy to partake in the wave of sword and sandal (Peplum) films, rooming together in a Rome apartment complex alongside of fellow Mae West stud Mickey Hargitay. Like Richard Harrison, Vadis had the ‘Hollywood’ looks and enjoyed a stint as a heartthrob to female audiences.

Move to the Spaghetti West

When the Ancient Rome set films faded out of interest, Vadis, like Harrison and Mitchell, made the seamless transition into the burgeoning Euro Westerns and Spaghetti Western genres. His first Western appearance was actually while the Herculean films were still in vogue in the German production Die Flußpiraten vom Mississippi (The River Pirates of the Mississippi) in a supporting role as Native American Chief Blackfoot. Again, like his close friend Gordon Mitchell, Vadis found himself mainly playing slimy villains in the Westerns, ranging from Mexican bandits in Degueyo and Un Uomo, una Cavallo, una Pistola (The Stranger Returns) to traitorous types in Per Pochi Dollari Ancora (Fort Yuma Gold). Vadis proved well suited to villainy, particularly in getting audiences to really despise his cutthroat baddies who would do anything and everything to get what he wants.

Return to the US/Working with Clint Eastwood

After playing a shifty and crooked Deputy Sheriff in the lesser known Western Dio Perdoni la Mia Pistola (God Will Forgive My Pistol), Vadis left Italy and disappeared for four years, seemingly retired from films. He resurfaced in the US in 1973 after meeting and becoming friends with Clint Eastwood, who cast him as one of the baddies in his Western with supernatural vibes, High Plains Drifter. His role as one of the outlaws who are sought by the Mysterious Stranger for murdering Marshal Jim Duncan, led to him once again play villains and henchmen. Aside from playing one of George Kennedy’s henchman in John Wayne’s Cahill US Marshal and an uncredited role in The White Buffalo with Charles Bronson, Vadis would stick with Eastwood, appearing in four of the actor’s films, including The Gauntlet and Bronco Billy. He also made one TV appearance in an episode of Starsky and Hutch, playing a small role.

After working on Eastwood’s Any Which Way You Can, Vadis was invited back to Italy to appear in a revival of the Peplum genre. Muscleman Lou Ferrigno, after his success on The Incredible Hulk, made two space age like Hercules films for director Luigi Cozzi, reigniting interest in the genre of the early sixties. Schlock filmmaker Bruno Mattei teamed Ferrigno with Vadis and Brad Harris, another Peplum star, also with 80’s action Queen Sybil Danning in I Sette Magnifici Gladiatori (The Seven Magnificent Gladiators), an Ancient Rome version of The Magnificent Seven. While the film itself did so-so, it did seem to get Vadis noticed again and things looked promising. Sadly, Dan Vadis’ career was cut short when police found him dead in his car in the Lancaster California desert. His death would be ruled an accidental overdose of ethanol, heroin, and morphine, but it remains unknown if he was privately battling addiction and relapsed, or was truly a freak occurrence.

Retrieved from "https://www.spaghetti-western.net/index.php?title=Category:Dan_Vadis&oldid=125811"
Category:
Cookies help us deliver our services. By using our services, you agree to our use of cookies.