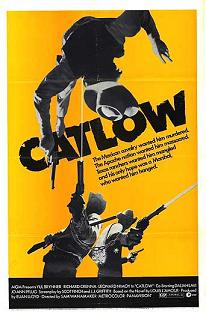 Comedic western based on a Louis L'Amour novel, starring Yul Brynner (Indio Black) as the laidback title character Catlow. Leader of a gang Catlow likes to steal and screw other guys' women, so there are various parties -Indians, Mexicans, husbands, jealous women and the US government- that he upsets. But he doesn't care about that, mainly because he's a smart guy. Besides that, he has sheriff Richard Crenna (La Spina dorsale del diavolo, Un Hombre llamado Noon) for a friend. Even though the sheriff has to bring Catlow in for criminal charges, they help eachother out constantly. Hot on Catlow's trail is Star Trek's Leonard Nimoy as the evil dude hired by the government to get back the $2 million in gold that Catlow stole.

This movie simply works. It's not a masterpiece by any means, but it definitely kept me entertained throughout. Shot in the spaghetti soaked atmosphere of Almeria, Catlow actually feels somewhat like a spaghetti western. This production manages to blend different western-styles nicely. The plot might not be Oscar-worthy material, but it has a very likable main character. The buddy thing between Brynner and Crenna is not too original a plot device, but works because of the fine portrayals by said actors. Above that, the humour managed to cause some smiles. There is a sufficient amount of action in this western, and even some romance. Because it was done in a comedic fasion here, instead of the soap-opera way, I had no objection to it.

By the way, fans of Leonard Nimoy (Mr. Spock in Star Trek) might want to check out this movie because their hero appears naked in it.

This material was used courtesy of Filmboob

Retrieved from "https://www.spaghetti-western.net/index.php?title=Catlow&oldid=123724"
Categories:
Cookies help us deliver our services. By using our services, you agree to our use of cookies.