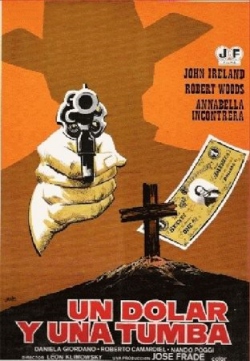 A drifter happens across a recently hung man and a distraught young woman as he rides through the country alone. He buries the man and takes the woman to a local ranch where he discovers that she is the ranch owner's daughter and that Dad was responsible for the hanging; his unsubtle way of fending off an enamored suitor he disapproved of. At first the drifter signs on to work at the ranch but he quickly falls out with the owner, Don Diego and his spiteful son, Chris and wanders into town instead. Here he meets up with a beautiful saloon keeper, falls even further foul of Chris and winds up rediscovering the dangerous passion of his unhappy past. Something that can only lead to more blood and tears as Don Diego and son see him as an increasing threat to their local supremacy.

On the surface, the above synopsis could easily describe any one of a number of genre features which aspire to nothing more than a bit of melodrama interspersed with periodic action sequences leading up to a showdown. The characters of megalomaniac patriarch, spoilt psychotic son, whore with a heart of gold and drifter compelled to intervene are by no means unique and the basic storyline is equally common. But first impressions can be deceptive and The Challenge of McKenna is far from a run of the mill horse opera. Beneath the standard plot structure and stock characters lies a genuine attempt to explore some deeper emotive issues and along the way it leans heavily on philosophy, scripture and poetry. Not something which can often be boasted by even the most lofty examples of the genre, let alone by a low budget, studio and gravel pit confined production directed by a man better known as a 'journeyman' than an artist.

This is possibly unfair on the director as Leon Klimovsky, although becoming better known for his lower end genre work, began his career in Argentina adapting literary titles for film such as Dostoyevsky's The Player and Ernesto Sabato's El Tunel. He always insisted that he had set out to make art films but had ended up making commercial ones. So perhaps The Challenge of McKenna is an example of what Klimovsky was capable of when given the opportunity. Then again, maybe not. As with many of these films, actual authorship is difficult to place. In a business climate of co productions where a quota of names from a particular nationality was essential to secure funding it is not always safe to attribute work to someone purely because of the credit list. Klimovsky's name is, for example, the one credited for A Few Dollars For Django despite the fact that Enzo G. Castellari is known to have directed much of that film. What confuses matters further is the appearance in the credits as writer of fellow director Edoardo Mulargia. Mulargia did occasionally write for films he didn't direct but at this time in his career that was rare. And lastly, just to muddy the waters further, it was claimed in Variety at the time of the film's production that the story was supplied by star John Ireland and British screenwriter Wolf Mankiwitz while Robert Woods has claimed that he and Ireland were responsible for directing most of the dramatic scenes themselves as Klimovsky said very little to the actors throughout the film. I am not claiming anything specific in regard to the actual credits due on this film. I just can't be sure of anything. But I do think there is probably more to be discovered about the film's actual authors and that we should probably be cautious in accepting the credits as given. One thing is for certain. Whoever was responsible, The Challenge of McKenna is a success due to a very good script well filmed.

Indeed it is the quality of the script that lingers with the viewer long after the closing scenes. Full of excellent one liners and interwoven with poetic quotes and religious allusions it exhibits genuine depth and resonance. It also allows the characters to show themselves through their dialogue beautifully without getting bogged down in lengthy speeches. One of the best examples of this is when Chris (Robert Woods), Don Diego's villainous son, is discussing with Ed, a neighbouring ranch owner, the possibility of marrying his sister if he has sufficient money. Ed is horrified at the idea that Chris would sell his sister. To which Chris replies "Me? I'd give the Bitch away." In one brief exchange we understand fully that Chris is not only nasty but jealous of his father's attention and that his father covets wealth and power above all else. We also learn that Robert Woods, in the right circumstance, makes a terrific spaghetti villain. As the film unfolds Woods grovels, rages, bites his nails with cannibalistic intensity and generally overacts to a wonderful degree. He also laughs maniacally, caresses his own face like some demented Richard the Third caricature and shows a truly unhealthy attraction to his sister. This is what I like to see in my spaghetti bad guys. Full on, unhinged villainy and Woods shows himself to be well suited to the type. Roberto Camardiel was, of course, more familiar than Woods with the heavy role and he is his usual excellent self as the patriarch Don Diego. Camardiel often alternated between villainous and light relief character parts but, for me, he is at his best in this sort of mean Mexican role.

At the same time, John Ireland fills the role of the drifter, Jones, perfectly too. Ireland played his share of villains over a long career but was always best, in my opinion, as the steady if troubled individual trying to live decently in challenging circumstances. This is the part he plays here. Jones (he is never called McKenna in the english language version of the film I have) is an intriguing mix of embittered loner and affable moralist. In western movie terms, a kind of cross between a James Stewart and a Randolph Scott character; at once searching for himself while running away from a bitter past. He is clearly the moral compass of the piece, his burying of the hanged man and instruction to the livery stable owner to "Give my horse 50 cents worth of feed and a kind word" establishes that very early on. Yet his character retains a certain ambiguity throughout and often resembles a film noir anti hero in his actions and cynicism. His enigmatic persona is accentuated even further by his repeated use of poetry quotes to answer personal questions directed at him throughout the film. But these quotes actually reveal more about his motivations than is immediately obvious. Shelley's Ode to the West Wind and Thompson's The Hound of Heaven illustrate Jones' rejection of God and the deity's reluctance to let him go so easily. Shelley was an outspoken atheist, Thompson's poem centres on the tenaciousness of faith and man's inability to escape it. Heady stuff for a low budget western.

The film does have its failings however and these, despite his excellent performance on the whole, are primarily centred around John Ireland. Or more specifically, his age. Although he plays his multi layered character very well, his love affair with Maggie the saloon owner is difficult to accept. Ireland was pushing sixty at the time and looks old enough to be the beautiful Annabella Incontrera's father. A sound actor he may have been, a romantic lead he patently was not. Moreover, it is clear that Ireland was also too old to handle his own fight scenes. A fact made all too obvious by the stunt double used, who even from behind appears twenty years younger. (This is a lesson worth noting for all film makers actually. If you are going to substitute an actor with a stunt double don't place them in the extreme foreground of the shot. Stevie Wonder with a bag over his head will be able to spot it.)

But these things aside, The Challenge of the McKennas is a very good example of a low budget film which punches well above its weight. All the cast are due praise, the soundtrack works well without being a classic, the themes are well played out and thought provoking and, above all, some of the dialogue and one liners are truly memorable. I could list a number of excellent quotes but perhaps the closing lines best exemplify the quality and down beat nature of the script. While pleading with Jones not to leave her, Maggies says: "You can't kill our love!" to which he replies: "I'm a human being, made in the image of God. I can kill anything I like." Excellent.

Unfortunately I am unaware of any current DVD release of this film. The copy I have is an old ex rental VHS whose fullscreen picture does not do it justice. However, the strengths of the film overcome this , along with its aforementioned weaknesses, and I would recommend it as worth watching in whatever format you can get hold of. Most certainly a hidden gem for my money. --Phil H 19:01, 28 February 2009 (UTC)

Retrieved from "https://www.spaghetti-western.net/index.php?title=Challenge_of_McKenna_Review&oldid=45092"
Category:
Cookies help us deliver our services. By using our services, you agree to our use of cookies.