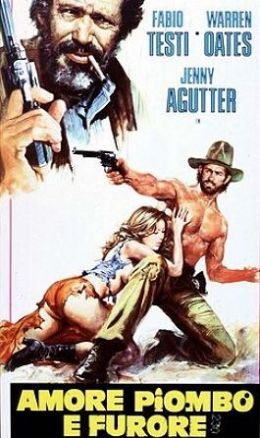 In 1978 the western genre was as good as dead on both sides of the Ocean, but some people just wouldn't accept it and thought it could be saved with a new impulse. Monte Hellman had both puzzled and fascinated audiences with his two acid westerns Ride in the Whirlwind and The Shooting and this movie originated in his wish to make a more traditional western (1).

A hired gun, Clayton Drumm, is saved from the gallows by Railroad Men, who ask him to kill a third person in return, a miner called Matthew Sebanek who refuses to sell his land to the Railroad Company. Clayton accepts the assignment, but the intended victim turns out to be a likable person. Matters are complicated when Matthew's young bride, Catherine, falls in love with Clayton; the two have sex on the morning of Clayton's departure, but Matthew finds out about his wife's adultery and wants to punish her and shoot the younger man. Catherine stabs Matthew in the back and joins Clayton under the idea that she has killed her husband, but Matthew has survived and asks his unhinged brothers to help him track down the couple ...

China 9, Liberty 37 (the title refers to a signpost shown in the opening scene of the movie) is a Italian-Spanish production and with the exception of the director and a couple of actors, the crew is entirely European, mainly Italian. The background story of the Railroad driving people off their land is no doubt a homage to Leone's Once Upon a Time in the West, but otherwise the film feels more like the revisionist American western. Sam Peckinpah has a small role (as a writer of pulp fiction) and there are a few similarities to Ride the High Country (the runaway bride, the unstable brothers, Warren Oates); in spite of Hellman's statements about his wishes to make a more traditional western, there are also similarities to his experimental westerns (and Peter Fonda's similarly unconventional The Hired Hand); the atmosphere is often oppressive, dialogue is sparse and although the two protagonists are gunslingers, it's more a story about people who have secluded themselves from society.

China 9, Liberty 37 is an interesting post-western, but it's not really a film for those who prefer the action-packed spaghetti westerns from the glory years. The script is meandering, with scenes set in a circus (clearly a homage to Fellini) and a brothel (probably a hint at McCabe & Mrs. Miller), but it also takes you off-guard with a few unexpected twists. The cinematography by Giovanni Rotunno (a regular Fellini collaborator) is likewise interesting, but often a bit foggy and artsy, with dim foregrounds and glowing backgrounds, a sort of clair-obscur in reverse. The score by Pino Donaggio is different, to say the least. Some love it, others hate it, I didn't really know what to think of it. I do like the China 9, Liberty 37 Love Ballad sung by Ronee Blakley over the end credits. Oates turns in a very fine performance as the miner, a very complex character: we soon learn that he has been a hired gun for the railroad and was forced at one point to kill a whole family, "right down to the dogs, the cats, and the chickens." He gains our sympathy, loses it, and finally gets it back again. Fabio Testi isn't bad either, but his lines weren't dubbed and he has a tendency to speak English as if it were Italian (that is: too fast) which makes it very hard to make out some of his lines. Like some have mentioned, his role also seems a bit under-written. Hellman uses him as some sort of Jack Nicholson (who appeared in both of his experimental westerns), focussing too much on Testi's brooding look and not paying enough attention to his character's moral dilemma's (2).

All in all this is a likable movie, and it has at least one aspect that will be appreciated by all male viewers: the presence of Jenny Agutter, the British actress who said about herself that the combination of her innocent looks and daring nature of her roles offered 'perfect fantasy fodder' (3). We're only five minutes underway and she's having a striptease - my oh my - and her assets are used on display throughout the movie, with a couple of love scenes that will certainly provide fodder for some peoples' fantasies. If Logan's Run is your favorite movie, wait until you've seen this one.

Simon Gelten is a long time contributor to the SWDb. "I'm not as old as Tom B. but I'm working on it. I hope to catch up with him by the end of the next decade.", he says. Simon saw all movies by Sergio Leone and several by Sergio Corbucci in cinema, most of the time in Eindhoven, the city where he was born. Currently, Simon is living in Turnhout, Belgium. Simon is active within the database as both Scherpschutter and his alter ego Tiratore Scelto.
Retrieved from "https://www.spaghetti-western.net/index.php?title=China_9,_Liberty_37_Review_(Scherpschutter)&oldid=113803"
Categories: