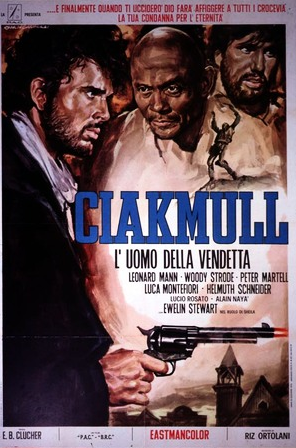 Four men escape from an asylum when it is set ablaze as a distraction to cover a robbery. One of the men, an amnesiac, is recognised by one of the robbers, but he dies before he can provide any further information. The four former inmates then travel to the town (incidentally the same one as named in Forgotten Pistolero) where it seems the mystery of the amnesiac's identity can be solved.

With Ciakmull, former photographer Enzo Barboni (Django and 9 other SWs) adopted the pseudonym E.B. Clucher and turned to directing. A year before he launched the Trinity films he proved that he was also capable of becoming a competent director of action films. Ciakmull shares the autumnal atmosphere and a similar story with Today It's Me, Tomorrow It's You, and only fails to become just like this one, a minor classic, because the screenplay sometimes runs out on Barboni by being a bit underdeveloped in places.