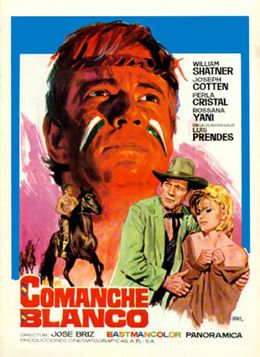 Most people of this planet (and several others I suppose) know William Shatner as Captain James T. Kirk from the TV series Star Trek, but he was also one of the American TV-actors who tried his luck in the Italian genre industry. Many critics have ridiculed his excursion to 'Italy' and his double adventure as both rapist and lover of 'Italian beauty' Rosanna Yanni, all this in the faint hope to make an Eastwood like career move. It's sometimes called the ultimate litmus test for Shatner fans: if you like this one, you may call yourself a genuine Shatner junkie.

A few remarks first: those of you with any notice of the Latin language group, will have noticed that the original title, Comanche Blanco, is Spanish. Technically this is not a spaghetti western but a paella western. Furthermore Rosanna Yanni is not Italian but Argentine. The film tells the story of two half-breed twin brothers (white father, Comanche mother), Johnny and Notah, who were both raised by the Indians. Johnny has decided to live as a white man, Notah has peyote-induced visions in which he leads the Comanche once again to glory (a clear reference to the incidents among the Sioux concerning the Sun Vow ceremony that eventually led to Wounded Knee). Johnny is almost hanged for crimes Notah has committed, such as an attack on a stagecoach and the rape of a female passenger. He is offered a job in the town where he and his brother have decided to meet within a few days to settle the score once and for all ...

Reviewed version: The film is part of the 3DVDs/9Films box of St. Clair Vision. The transfer is full-screen and very poor; the colour palet often changes from too yellow to too green in one and the same scene and - even worse - white turns to pink from time to time, nearly damaging my already reduced eyesight. Luckily the film was awfully shot in the first place.

Simon Gelten is a long time contributor to the SWDb. "I'm not as old as Tom B. but I'm working on it. I hope to catch up with him by the end of the next decade.", he says. Simon saw all movies by Sergio Leone and several by Sergio Corbucci in cinema, most of the time in Eindhoven, the city where he was born. Currently, Simon is living in Turnhout, Belgium. Simon is active within the database as both Scherpschutter and his alter ego Tiratore Scelto.
Retrieved from "https://www.spaghetti-western.net/index.php?title=Comanche_Blanco_Review&oldid=101765"