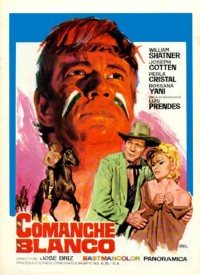 Awfully shot and badly written, the film still manages to entertain as one of the genre's utmost oddities. The best thing about it, is Cotton - in the last of his three European westerns - as a wise and knowing sheriff who tries to maintain the peace. Shatner is no match for him but he delivers the expected one-liners with bravery (Cotton: I noticed that your horse has no brand. Shatner: You'll find no brand on me either). To see him in war-paint and thrust a tomahawk is truly a unique film experience. Argentine beauty Yanni, who made a career as a heroin in European horror movies, may not be the greatest of actresses, but her screen persona is so strong that we even accept that she falls for the spitting image of her rapist. The other actors, looking very Spanish and talking with strong accents, all do their job decently, without making much impression. The action scenes are rather well executed, but the director has an almost laughable predilection for shots between the eyes. And oh, for what it's worth: a homosexual friend of mine told me that Shatner looked great with war-paint (and a naked upper part of the body).