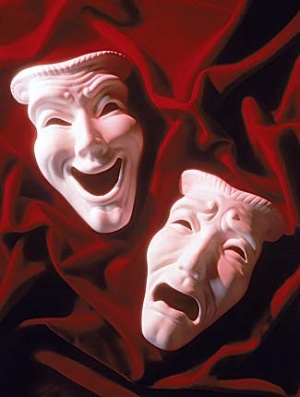 Spaghetti Westerns are very famous for their darkness, cynicism and often bleak outlooks on life. Although many were less than serious, the genre really flourished when it was being serious. But so many of these ultra dark, serious Westerns were being made in 1968, that audiences began to bore with the same old vengeance, killing and death. The amount of Spaghetti Westerns drastically slowed down by 1969. But several were still being produced. But in 1970, former cinematographer, Enzo Barboni, finally began work on his long awaited project, They Call Me Trinity. Although this film was a humongous success, it proved to be a very costly move for the Spaghetti Western.

They Call Me Trinity was written by Barboni several years prior. But had never been made on account of producer disinterest. This did not deter Barboni. Apparently, he offered the role of Trinity to Franco Nero while photographing one of the star's early Western films. Nero had no interest in a lighthearted western and refused. But by 1970, Barboni had the go-ahead. The Italian acting duo, Terence Hill and Bud Spencer were cast as Trinity and Bambino. The film was released to great success and started a newer version of the Comedy Spaghetti Western.

Of course there had been comedy Spaghettis before it, but those films used the West as a backdrop for comedy and silly antics. But still stayed true to the genre. Or so I've read. Trinity was the film that changed it all. It poked fun at the super macho Italian Westerns before it and chose punches over bullets, fists over guns and laughs as the desired affect. Audiences took to this and were laughing with the film at the Western. Instead of tense waiting for Leone-esque gunfights, the hero would be wolfing down a plate of beans and chugging down Tequila before shooting his opponents dead. If not shooting them in the hand instead. That is another thing. The kill counts of the Comedy Spaghettis had also drastically subsided. As noted, the characters settled their differences with comedy fist fights instead of duels. A trick to escape the cliche of the duel was the slap. If a villain challenged a hero to a duel, the hero will proceed to go into the gun slap routine where the hero draws his gun, quickly re-holsters, slaps his opponent, then draws again. The purpose is to intimidate the villain with the heroes exaggerated gun skills which is in turn, all for laughs. This was the style of the new comedy western. 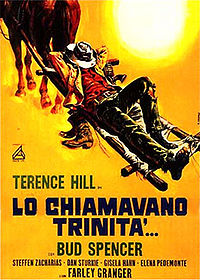 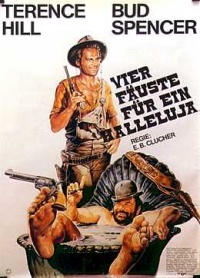 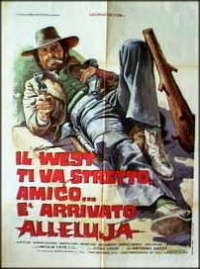 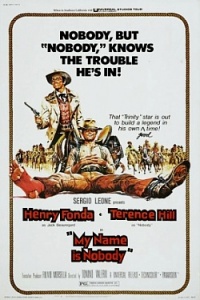 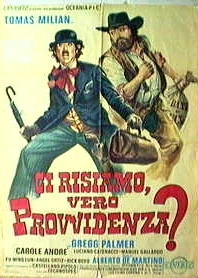 Italian director Giuliano Carnimeo had directed Spaghetti Westerns before the Trinity films but once they arrived, he was one of the many genre directors to completely change his style to cope with the new comedy films which sold big at the box office. A great example of this is the director's own They Call Me Hallelujah. The film is chalked full of excess. It has enough action for action fans and enough comedy for comedy fans. But the film is unmistakably 70's in terms of comedy. But it is a great example of a film which sits rather oddly with the comedy label. But it does have many trademarks of the Trinity films. Definitely a film made to make a lot of money and probably not one of Carnimeo's labors of love. But this definitely is an example of the Italian tradition of mimicking the style and or characters of other successful films. (Django, Sartana, Sabata, Ringo, Hercules and Hallelujah.)

So many Spaghettis in the 70's included comedy, that the lines of what exactly makes a Spaghetti comedy have become somewhat muddied as we began to immediately expect that any and all 70's Spaghettis were comedies (not true btw). Serious films such as Price of Death feature scenes that were more appropriate for comedies but alas were not comedies in the strictest sense. Even Carnimeo's later westerns were barely comedies. Mostly because of the incredibly high kill counts. So, in my eyes, for a Spaghetti Western to be a comedy, it must be constantly funny, silly and not serious. But there is one Spaghetti comedy which seems to go against all these rules.

My Name is Nobody. Sergio Leone is credited as starting the genre. But during the comedy boom of the 70's, Leone looked at his beloved genre with disgust. He is known to have hated the Trinity movies which parodied the genre and Leone. So Leone's response to this was to produce a comedy of his own. And if you read into it enough, you might find his response was very drastic. In my eyes, with this film, Leone is intentionally killing the Western. The aging American western hero is growing weary of the new times and sails away for new horizons. But he decimates a 150 strong gang called the Wild Bunch, before it. So when he shoots them, he is also shooting down the western. But he is doing this so it will be remembered for what it used to be before it gets out of hand with the new Trinity movies. As I said, this film defies all Comedy Western rules. Well, maybe not all. But it is not nonstop laughs. It is fairly talky and can be rather touching in both its beauty and its message. It can be serious too. But the film has its comedy moments and is rather silly.

My Name is Nobody is quite possibly the most referential Western ever made. And what would a comedy be if it didn't reference other movies to parody? Not much. But this film does not parody most of the films it references. Those it does seem to parody are the Spaghetti Western comedies which were destroying the genre. Leone's answer to this was to directly copy from these Spaghettis both to entertain the audience with supposed comedy, and to somewhat make fun of the comedies. Some have said he was trying to hold a mirror to the audience to see what the genre had become. But the bulk of the comedy Spaghettis beyond Nobody were referencing Leone's films and the early films in the genre. But not all references were Spaghetti. Trinity seems to make references to Shane with Trinity and Bambino protecting defenseless Mormons from a greedy rancher. This scenario is also similar to The Magnificent Seven. But the main parody of these two films lies in the style of the Trinity comedy. Instead of a grand gunfight or settling of accounts duel seen at the end of these two films, there is a grand fistfight. Both these two films were serious movies but their climaxes have been turned into comedy. Another reference in Trinity is the use of Mormons as the good people whom we are to sympathize with. They are obviously references to poor defenseless ranchers seen in countless westerns that are terrorized by the rich. But the fact that they don't believe in violence is simply the easiest way out of filming scenes which go deep into religious or personal beliefs which might have been one of the more serious moments in the film. A possible parody in the Carnimeo comedies and Trinity is Still My Name is the use of monks as bad guys in disguise. Italy was and is a very Catholic country and this spilled over into the realm of the Italian Western on numerous occasions. But in the previously mentioned films, it is possible that the monks are parodies of the religious aspects of the early Spaghettis. This is not etched in stone and is definitely open for interpretation. 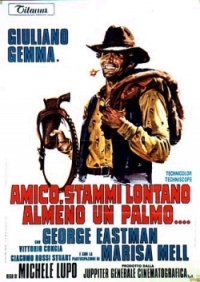 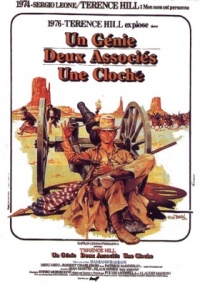 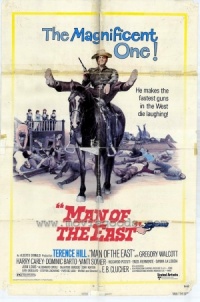 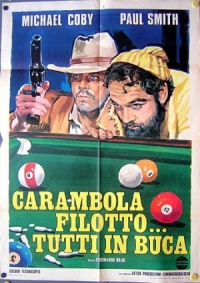 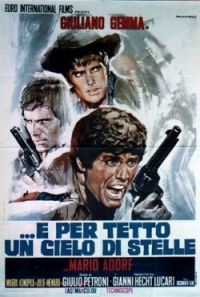 After Nobody's success, Leone saw a money making opportunity in a sequel. I have to make a little comment that may seem slightly off topic. I believe it was wrong for Leone to do this as it seems to completely go against his obvious and recorded intentions with My Name is Nobody. He wished to end the Western with Nobody but with Genius, he was responsible for continuing it in its already damaged state and not only that, it was another comedy which seems to make him something of a hypocrite. Anyway, Genius is a follow up to My Name is Nobody with Hill again in his Nobody garb. The film shows flashes of brilliance only Leone could achieve but I felt a certain sadness while watching it knowing this was one of the very last films of a great long genre. Almost like saying your last goodbye to a dying friend. And the film does share similar aspects with Nobody and has the same melancholy feel about the end of the glorious west and the passing of a time. On the comedy level, I didn't laugh but it is an appropriate goodbye to the comedy westerns. Being one of the last made in Italy.

I know that many of you on the board do not like these comedy spaghettis and I don't really laugh when watching them, but they are a crucial part of genre history and despite the fact that 90% of these comedies were unfunny and awkward, there were and are a few classics that brought a smile to my face. But there is one film that gets an official gold star from me. This film deserves a prize for ACTUALLY MAKING ME LAUGH AT SPAGHETTI COMEDY. I make it a big deal because, as I said, most of the Spaghetti comedies are very unfunny. But the film I am talking about is Life is Tough, Eh' Povidence? But even this film suffered from the decline of the genre as started by Trinity. I do not hold Trinity responsible for killing the genre, I hold Italian producers responsible for this as they were the ones who were responsible for allowing so many of these genre killers unleashed. But the comedies of the genre are absolutely necessary. They brought a smile to the people and relieved us from the nonstop mean-spiritedness of the Golden aged Spaghettis. For their effort, I salute them.

Without a doubt the funniest Spaghetti Comedy I've seen. It features a lot less of the stupid humor of the other comedies and replaces it with wonderful silliness, well timed wise cracks and some shock humor. It is probably the comedy that most genre lovers speak of with actual pleasure. It's a very well made comedy with strong attention given to characters. You actually enjoy the characters and want them to stay on screen longer. I'm usually repulsed by the comedy hero and his stupid sense of humor. But this film has great characters. There is no real serious situation in the film that forces you to connect with the character in a short emotional scene that halts the comedy. None of that here. The film is straight comedy and for you to bond with the characters or at least enjoy them without any serious development is extraordinary.

I must give my man Petroni his credits. His contribution to the Spaghetti Western genre is like Alfred Hitchcok's contribution to Thrillers and noirs. He (Petroni) is mostly remembered for his serious westerns but here, he does what no other genre director could do. He creates a genuinely hilarious Spaghetti comedy. He also assembled a rather strange cast. Popular genre actor, Tomas Milian was cast as the Chaplin clone hero. He is teamed with little known American actor, Gregg Palmer. Who I've personally only seen in Big Jake. The two make a great pair and had me laughing for the whole duration of the 1 hour 40 minute runtime. The film was followed by a sequel, Here We Go Again, Eh' Providence, which has a reputation of being even wilder than the first but I've yet to see it. I will wait in agony until then.

Retrieved from "https://www.spaghetti-western.net/index.php?title=Comedy_Spaghetti_Westerns&oldid=47872"
Category:
Cookies help us deliver our services. By using our services, you agree to our use of cookies.