Difference between revisions of "Companeros review by Pete R" 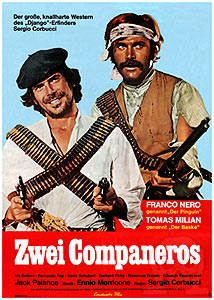 After directing such Spaghetti Western classics like Django (1966), Navajo Joe (1966) and his first Zapata Western: The Mercenary (1968), Sergio Corbucci decided to make another Western set during The Mexican Revolution called Companeros starring the same actors he used in The Mercenary: Franco Nero and Jack Palance. Corbucci is known to Spaghetti Western aficionados as "the other Sergio", the other being Sergio Leone. During the Spaghetti Western era in the late 60s-early 70s, Corbucci established himself as one of the masters of the genre. Although he was influenced by Leone and even borrowed Leone's composer, Il Maestro Ennio Morricone for several of his films, Corbucci crafted unique stories and went on to make the genre his own.

Companeros opens with a scene from the finale of the film (which I won't spoil) then we get an introduction to Vasco (Tomas Milian) a small time thug who's trying to do his best to stay alive. When he meets a man who disrespects him, Vasco lets him know that he won't be messed with. When the feared General Mongo sees this, he is impressed by him. He gives Vasco the honor of being Lieutenant in his personal army. Vasco cant believe it, but pretty soon we can see the new status has gone to his head.

Enter Yodlof Petersen (Franco Nero) aka The Swede, an arms dealer who has arrived by train to meet with General Mongo to help him with the war against the Sandinistas. When Vasco and his men see the Swede they begin to laugh because he is dressed like a prissy dandy. Vasco quickly gives him the nickname "Penguin" and the men roar on with laughter as Swede walks closer. The Swede sees a banana peel that Vasco has thrown at him and picks it up with the tip of his cane. Then he throws it back down. Swede asks Vasco what the best spot to stay in town is, and Vasco points him towards an old hotel where Mongo's men usually hang out. As The Swede leaves, Vasco begins to walk the other way and slips right on the banana peel.

The Swede enters the hotel where he inquires if theres any rooms to rent. The inkeeper explains that the room he wants is vacated by one of General Mongo's men, Pepito. Pepito is a fat slob, who is eating a leg of turkey and drinking tequila. The Swede deftly crosses out Pepito's name from the book and signs his own name in. He then walks over to Pepito and insults him and every member of his family except his sister. Pepito gets his ass handed to him by The Swede. The Swede may look like a bit of a high class wuss, but he's tough as nails. When The Swede gets to his room, he encounters a small group of Sandinistas. They want to know if he will help them get weapons to fight Mongo and the Zapatistas, but The Swede tells them he has no interest in politics, just money. If they come up with the cash, he will help them out. Vasco and his men pay a visit to The Swede, and see the Sandinistas running from his room. They open fire on them and Vasco goes up to Swede's room, where he is in the middle of making out with a woman in the bed. Vasco comically taps Swede's head and then Swede replies with an "I'm busy" gesture. Vasco lets him know that he's in deep trouble for helping the Sandinistas.

In the next scene, we see The Swede is up to his neck in trouble (literally). Vasco has buried him, Spaghetti Western style up to his neck in hot sand in the center of an arena. Swede knows he's had it. When Vasco tells his men to charge on their horses, Swede tries to sink down as much as possible. As the men gallop towards The Swede set on crushing his head like a berry, suddenly a car pulls into the arena and General Mongo jumps out yelling to the men to stop. When Mongo realizes Vasco is behind this stunt he calls him every name in the book. The Swede looks up and tells Mongo he loves him.

Since Mongo has The Swede there to help out by using the explosives he's brought with him, he shows The Swede a large bank safe that they have in their "current possession". The problem is, they can't open it. The only one they know who could is Professor Xantos, but that's another problem as Xantos is being held at a Fort in Texas. Mongo asks Swede if he will go bring Xantos back to open the safe and The Swede agrees on one condition: that he gets 1/3 of the money inside. Mongo agrees and gets The Swede's old pal Vasco to go with him. The wild Companeros' adventure then begins!

Companeros is an example of Italian Westerns at their best. It really is a gem of the genre. Filled with all those things Spaghetti Western fans like myself love to see and hear. You'll get that great light hearted charm from Franco Nero's Swede contrasted with Tomas Milian's crass, reckless Vasco character. There's also a very entertaining performance by Jack Palance as John, a marijuana addicted outlaw who is an old acquaintance of The Swede. It seems that John and The Swede were partners years earlier in Cuba. During a botched job, The Swede left John high and dry, to be crucified by the Cubans. While John was on the cross, the only way he could get free was by letting a bird eat his hand off. He kept the sparrow whom he calls "Marcia". The film also has a lot of witty humor including a scene where Vasco comes to The Swede's aid after he is hung up on a pole by John. The Swede begs for help (as he tries to balance on a barrel) and Vasco climbs the pole and really makes the most out of Swede's vulnerable position.