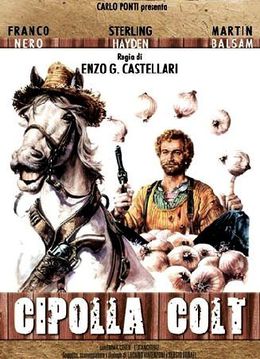 This comedy spaghetti may not be as bad as it’s reputed to be, but don’t forget that it’s often called one of the worst ever. It was directed by the man behind Johnny Hamlet and Keoma and stars Mr. Django himself, but the movie is a stinker about the fastest Onion in the West. And no, it doesn't smell like spaghetti spirit. Franco Nero is Onion Jack, a man who virtually lives among the onions. He eats them, drinks them, and even uses them to defend himself. He’s in possession of a gun, but basically uses his onions to throw, squeeze and breathe his opponents out. Jack has bought a piece of land and now wants to settle down and cultivate his beloved onions, but the property is still in possession of two orphans of the original farmer, and they have a lease which identifies them as the legal owners. Furthermore the property is coveted by the evil oil prospector Petrus Lamb, who has already driven all other inhabitants of the valley off their lands.

Simon Gelten is a long time contributor to the SWDb. "I'm not as old as Tom B. but I'm working on it. I hope to catch up with him by the end of the next decade.", he says. Simon saw all movies by Sergio Leone and several by Sergio Corbucci in cinema, most of the time in Eindhoven, the city where he was born. Currently, Simon is living in Turnhout, Belgium. Simon is active within the database as both Scherpschutter and his alter ego Tiratore Scelto.
Retrieved from "https://www.spaghetti-western.net/index.php?title=Cry_Onion_(Cipolla_Colt)_Review&oldid=110860"