Okay, maybe this comedy spaghetti is not as bad as it’s reputed to be, but don’t forget that it’s often called one of the worst ever. It was directed by the man behind Johnny Hamlet and Keoma, written by two of the best screenwriters in the business, and stars Mr. Django himself, but the result is a stinker about the fastest Onion in the West. Franco Nero is Onion Jack, a man who virtually lives among the onions. He eats them, drinks them, and even uses them to defend himself. He’s in possession of a gun, but basically uses his onions to throw, squeeze and breathe his opponents out. Jack has bought a piece of land and now wants to settle down and cultivate his beloved onions, but there are a few complications: the property is still in possession of two orphans of the original owner, and they have a lease which identifies them as the legal owners, and furthermore the property is coveted by the evil oil prospector Petrus Lamb, who has already driven all other inhabitants of the valley off their lands.

The story by Sergio Donati and Luciano Vincenzoni is a sort of rewriting of Once Upon a Time in the West, with some changes made - water has become oil, the widow has become two orphans (don't know how they did it) - and in the style of a spoof. Nero has been given a curly perm to make him look like Terence Hill (or maybe his poodle), while his horse seems modeled after Luky Luke’s famous four-footed friend Jolly Jumper: he has been given the capacity to communicate and I’m sure he’d beat his boss at chess. People have either silly names or silly characteristics: Jack gets some assistance from a newspaperman called Pulitzer, and the corrupt oil prospector has a robotic hand, and an employee with a Hitler moustache (and a Jewish name, Benjamin!). Martin Balsam hams it up as the evil Petrus Lamb (a miracle they didn’t call him Agnus Dei), but Sterling Hayden (once Johnny Guitar) plays his newspaperman with an ironed face. Balsam often made the trip to Europe in the course of the seventies (apparently he had the right face to play in mafia movies), but it was Hayden’s only appearance in an Italian genre movie; he was in Italy for Bertolucci’s Novecento, and probably had no idea in what kind of movie he had ended up. Among the genre regulars are Leo Anchoriz, Romano Puppo and Dan van Husen, all in silly parts. Giusti claims that Castellerai made a guest appearance in his own movie, but I haven’t spotted him. 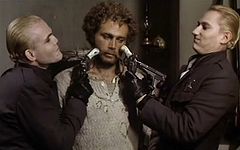 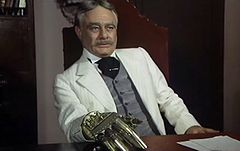 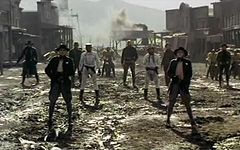