Condenados a vivir (See database page) is best known for the tag line “Possibly the most violent Eurowestern ever made" (1). It’s said that certain theaters distributed ‘Terror Masks’ that people could use to cover their faces during the most shocking scenes. The film tells the story of Sergeant Brown (Undari) and his daughter Cathy (Emma Cohen) who are escorting a chain gang of seven convicts to the prison of Fort Green, situated on the other side of a mountain range. The escort is ambushed by bandits who are looking for gold (but can’t find any) and therefore kill the soldiers and frighten the horses. The wagon capsizes and one of the convicts breaks a leg, but Brown forces the men to continue the journey. The gold the prisoners were looking for, was under their nose: the chains binding the men, are made of gold. Greed and distrust take over and the journey turns into a nightmare ...

According to Claudio Undari, the gore scenes were an afterthought. The film was shot without too much blood and gore, but the American distributor asked Marchent to re-shoot some scenes in order to turn the whole thing into a splatter movie (2). I suppose the terror masks were an idea of the same person. How violent is this movie actually? Well, a throat is slit, a foot is chopped off, an eye is shot out, bodies are burned to a crisp and a person’s entrails are exposed in close-up during a stabbing scene. So I’d say it’s pretty violent, but the scenes are rather brief and sudden (too sudden to put on the terror mask) and they also have a fake look. The rape scene is more shocking than the gore. It seems to me that the gore scenes don’t add much to the film’s main objective, that is to show how bad and destructive people can be. Maybe the film would have worked better without them. 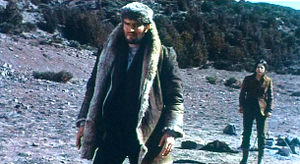 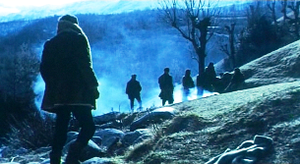 Cut-throats Nine isn’t bad, some of the movie works, some of it doesn’t, and it works better as a survival movie than as a western. Undari is killed halfway through and only re-appears in what has (erronously) been called a 'zombie scene’. The scene is introduced by the burned-down house rising from its ashes in phoenix style, so it’s clearly a hallucination and it perfectly links up with this idea of survival and people living on the edge of insanity. It’s actually one of the better scenes in the second half of the movie, which is less poignant than the first. The flashback style - freeze frames introducing personal memories of the characters - doesn’t really pay off. Some tension is created with the help of a whodunit subplot (Brown was convinced that one of the convicts killed his wife) but those who know their Agatha Christie will have no trouble identifying the killer.

Due to the snow-capped hills, the movie invites comparison to The Great Silence. Marchent’s movie is a bleak horror western, quite successful in showing the beast called man at his ugliest, but it’s by no means a masterpiece and apart from the snow, there are no real paralelles to Corbucci’s movie. In the interview with Giusti, Undari complained about temperatures of -20 °C on the Picos de Europa, a National Park in the Cantabrian Mountains (20 km inland from the northern coast of Spain), but the location isn’t mentioned on-screen. The credit sequence tells us that the film was shot near Huesca, more to the East, on the south-flanks of the Pyrenees. Most scenes were shot below the timber-line, and in many scenes there’s no snow at all, nor are there any signs that circumstances were that harsh.

An infamous horror western set in the snow, about a chain gang of seven prisoners who are escorted by a sergeant and his daughter. They lose the wagon and therefore will have to continue their journey on foot. Greed and distrust take over when they discover that the chains are made of gold