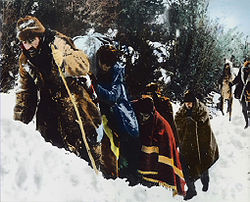 In this early 70s, Spanish Western production, the story focuses on a group of Civil War criminals who are being transported by wagon through the snowy mountains by Sgt Brown (Robert Hundar aka Claudio Undari) and his daughter Sarah (Emma Cohen). The criminals are the real dregs of society and made up of extortionists, rapists, killers and the like (they are a sort of Civil War Dirty Dozen minus three). At the opening of the film we get a voice over by Sgt Brown describing the basic plotline i.e. how he has to transport them to a place on the other side of a large mountainous range which is supposed to be in the US but its obviously the Spanish Alps. On the journey, the wagon the men are in gets hijacked by a bandit and his son who are looking for a cache of gold. The only problem is, they can't find it, so they let Sgt Brown go. What the old bandit didn't realize was that the gold was right in front of his eyes: its the actual chains the convicts are wearing! They continue driving on, that is until they have an accident and the wagon tumbles down an enbankment, throwing the convicts around and destroying the wagon itself. Now the criminals have to be brought to the jail on foot. We learn that Sgt Brown's wife was killed by one of the convicts he's transporting, but even he doesn't know which one it is. Director Joaquin Marchent utilizes flashback sequences in slow motion to tell the backstories of some of the convicts in the group as well as Sgt Brown, Sarah and his wife and their happy life before her murder by the mysterious killer in the group.

The expedition treks through the snowfilled mountains, and they only have a weeks worth of provisions. The men end up eating all the food earlier than expected, so they must kill animals like deer to survive. When they get into a battle of wills with Sgt Brown, one of them refuses to move from the spot they are at. Sgt Brown shoots the man in the head, then cuts one of his legs right off. The group finally make it to a cabin and begin drinking. One of the men rapes Sarah as the others watch on while Sgt Brown is strung up and cant do anything about it. This film doesn't relent in the violence and we get a total shock when Sgt Brown doesn't even get any chance for revenge. The men simply torch the cabin and we see Sgt Brown's burnt-to-a-crisp body melting in the fire! Sarah is left alive but follows the men for one reason, she's in love with one of them. The men find some train tracks where they realize it's a perfect place to cut their chains off. They lay down inside the train tunnel and wait for the train to come. Sarah stays with the group and they arrive at another cabin where during the finale we find out who the murderer of her mother really is and what follows is literally an explosive ending. - Pete R.