Warning - This review will contain spoilers, a donkey, fake succulents, and opinions. 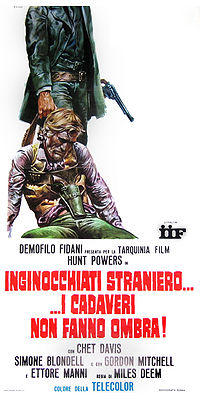 ... otherwise known as Stranger That Kneels beside the Shadow of a Corpse

So – we are in the presence of two of the best (but shadow-wise conflicting) titles, for but only one spaghetti western. There may be a general rule in spaghettiland that the better the title, the worse the movie? Will this be another case in point? After all, it is a Fidani!

And the film does indeed begin with both a corpse and a shadow, so we could at least contemplate their metaphorical value should we be at all bothered. Most noticeably, one of the shadows is both a stylish and seamless extension of the black-clad bounty killer Lazar Peacock, (played by Fidani-fave Hunt Powers), who is dragging the ‘wanted’ body into town by his gun belt. Collecting the reward, but answering the sheriff’s question about missing gold with only a smug smirk as silent reply, would have us questioning as well – about Lazar’s honesty. But of course, dead men don’t talk (as well as not making shadows).

All is boding well so far in spaghetti-land, and it still to get better yet. An organ pipes up perfectly to herald our second protagonist – a broodingly silent individual who somehow combines a look that melds the boyishness of a Terence Hill with the altogether darker worldly-wise fatalism of Trintignant’s Silence – complete with the latter’s stubbly beard, frowned eyes and scarf look. And if Lazar’s on the trail of bounty (and gold), then Blonde (Chet Davis) is on the trail of Lazar. He follows signpost to town, followed by more signposts and towns, and ripped down Wanted posters and collected bounty, until he arrives ahead of Lazar, as illustrated by the still intact poster showing Roger Murdoch’s ugly $12,000 mug. This poster also signals Gordon Mitchell’s short cameo role, but it is used to good effect as he magnificently overacts, gurning and grovelling to his demise from Lazar’s custom screw-on extension barrelled pistol. OOoops! But then it’s not? But other than this small continuity error regarding its on-ness or off-ness, this film has started damn near perfect imo. (But can this form continue – it is a Fidani after all?)

And it does so for now. We’re straight back into cool style-on-a-budget, as Lazar heads off to have his dead-mans gold buried in the most bijou graveyard of the genre, guarded by a cute donkey and a lame-legged ol’ scrote. The latter babbles on about having his innocence proved, something which seems highly important to the ol’ wingebag, but both Lazar and the donkey seem unmoved by his plight.

Back in town, Blonde’s holed up and showing off his shooting credentials to another ol’ scrote until Lazar arrives to collect the reward. So far, so great! We sense for certain now that our two protagonists are fated together, and wonder on what terms they are destined to meet. Maybe in uneasy alliance, or perchance in vengeful showdown, – and of course, even better… if they were to be in both?!

As this is true spaghetti-land, it is off, over the border we must go – to spaghetti-mexi-land - for some sadistic whip-cracking, cracking senorita action and cackling Mexican bandito clichés. And we start with Medina, as nearly an over-the-top Mexican as you can imagine. 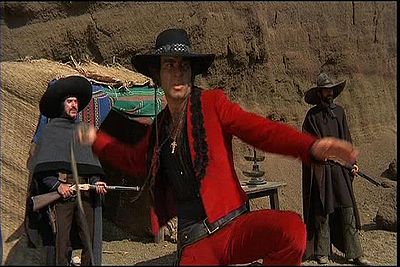 Whip-wielding, hoop ear-ringed, scarlet suited - he is the mine manager in the employ of fat-cat, white suited gringo, Senor Barrett, and it is he that dispenses the lashes to the peons who work for a pittance in the mine. But, if he’s in the latter’s employ, he’s more intriguingly under the spell of the blisteringly ice-blue-eyed beauty, and her lashes of a different kind… of the gypsy dream-weaver and fortune-teller, Maya. And who wouldn’t be, I ask ya?! Simone Blondel (Fidani’s daughter) plays the part excellently and suits the dark dusky look that she affects for this role. 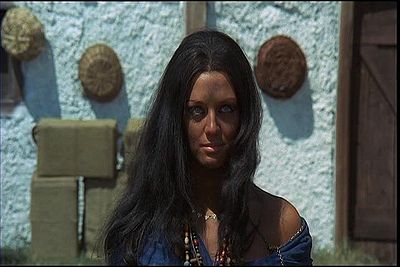 And so it is to this background that our protagonists will meet, to be beaten and shot at, to deal and double-cross, one to be driven into the affections of Maya’s heart, the other to her hatred. And then the background gets even more colourful because of course it’s festival day, and we get happy mexi-music, and dancing from Maya, and great camera angles and filming from Aristide Massaccesi /Arizona Massachusset / Joe D’Amato... who likes Maya’s legs nearly as much as I do. Well, I haven’t been in the slightest bit disappointed so far. Now if we could only conclude with a double double-cross, some acrobatic shootings, a well choreographed fight for Medina to get his comeuppance in, a slo-mo flashback, and a final confrontation by an open coffin full of gold, then all would be perfect. But this couldn’t happen surely? After all, it’s a Fidani!

(OK... ok – edit. It’s not the 5 star film I seem to be pointing at with my naive gushings, but it is jolly good though. There are faults, (this is spaghetti-land after all), but it is not the “uninspired … turkey” one forumite would have us believe, (imo - and of others – there seems to be some fondness for this piece of Deemworld?). Neither does it rely on protracted shootouts with never emptying guns, and the flamboyant aerial pirouettes of death that Fidani is renowned for. This is a reasonably slowly paced - (think Night of the Serpent/ A Bullet Between the Eyes here maybe), - reasonably storied, well charactered film, and it makes the most of a tight budget, getting ‘more for less’ much better than some. It gets the best from a cardboard and papier-mâché Mexican village, and what he does with two plastic cacti to transform bits of quarry into Mexico/ borderland is superb (just see how many times they pop up throughout this film!) 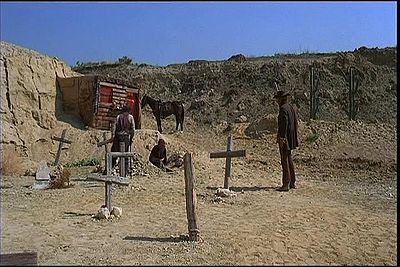 A couple of scoops of cider, and settling down to this for 90 minutes? I reckon I’ll be making the trip again soon.

So - 2 plastic cacti, a cute donkey, and 4 stars from the Rev. Well done Mr. Spitfire – this one certainly hits the target!

Retrieved from "https://www.spaghetti-western.net/index.php?title=Dead_Men_Don%27t_Make_Shadows_Review&oldid=124083"
Category:
Cookies help us deliver our services. By using our services, you agree to our use of cookies.